Last updated March 19, 2020
International beauty contest for people linked to Irish communities
For other uses, see The Rose of Tralee.

The Rose of Tralee International Festival is an international event which is celebrated among Irish communities all over the world. The Festival, held annually in the town of Tralee in County Kerry, takes its inspiration from a 19th-century ballad of the same name about a woman called Mary, who because of her beauty was called "The Rose of Tralee". The words of the song are credited to C. (or E.) Mordaunt Spencer and the music to Charles William Glover, but a story circulated in connection with the festival claims that the song was written by William Pembroke Mulchinock, a wealthy Protestant, out of love for Mary O'Connor, a poor Catholic maid in service to his parents. [1]

The festival has its origins in the local Carnival Queen, once an annual town event, fallen by the wayside due to post-war emigration. In 1957, the Race Week Carnival was resurrected in Tralee, and it featured a Carnival Queen. The idea for the Rose of Tralee International Festival came when a group of local business people met in Harty's bar, Tralee to come up with ideas to bring more tourists to the town during the horse racing meeting and to encourage expats to return to their native Tralee. Led by Dan Nolan, then Managing Director of The Kerryman newspaper, they hit on the idea of the Rose of Tralee Festival. The event started in 1959 on a budget of just £750. [2]

The founders of the organisation were Billy Clifford, an accountant with the Rank Organisation, who was one of the first recipients of the Golden Rose award (which was inaugurated to celebrate the 10th anniversary of the Festival of Kerry); Dan Nolan, involved with the Tralee Races; Jo Hussey, a shopkeeper in Tralee; and Ted Keane Snr, a local restaurateur.

Originally, only women from Tralee were eligible to take part; in the early 1960s it was extended to include any women from Kerry, and in 1967 it was further extended to include any women of Irish birth or ancestry. [2] Recent winners have included three women of mixed heritage, namely Mindy O'Sullivan (Filipino-Irish), Clare Kambamettu (Indian-Irish) and Kirsten Mate Maher (Zambian-Irish). On winning the title in 2018 Maher said "There is no 'typical Irish woman'. We're all different and we all come in all shapes and sizes and skin colours... We're such a diverse community, and we need to embrace that". [3]

In 2004 the Rose of Tralee Regional Finals were introduced to offer more people an opportunity to participate in the Rose of Tralee International Festival. It was held every year until 2015 in Portlaoise, Co. Laois on the June Bank Holiday weekend.

From 2004 to 2015, the number of Rose Centres grew to more than 65. The Regional Finals became well-established and was a prestigious part of the process to finding the next Rose of Tralee. In 2014 it was announced that the 2015 Regional Finals would be the last, in favour of a revamped selection process held in Tralee.

The Rose of Tralee festival is held every August in Tralee, County Kerry, to choose a young woman to be crowned the Rose. The winner is the woman deemed best to match the attributes relayed in the song: "lovely and fair". She is selected on the basis of personality and should be a good role-model for the festival and ambassador for Ireland during her travels around the world. It is not a beauty pageant and the participants (Roses) are not judged on their appearances but on their personality and suitability to serve as ambassadors for the festival. The festival bills itself as a celebration of the "aspirations, ambitions, intellect, social responsibility and Irish heritage" of modern young women. [2]

Each of the 32 counties of the island of Ireland selects a Rose, and the international Roses, chosen from around the world, also participate in the qualifying rounds now staged in the Festival Dome in Tralee. Ultimately, 32 Roses are selected to appear in the televised selection finals on RTÉ One, out of whom one is crowned the Rose of Tralee.

The selection, which is broadcast over two nights by RTÉ, has been hosted by Dáithí Ó Sé since 2010. [4] It was previously presented for 17 years by Gay Byrne. Other previous presenters include Terry Wogan, Brendan O'Reilly, Michael Twomey, Kathleen Watkins, Ray D'Arcy, Ryan Tubridy, Marty Whelan and Derek Davis. The first presenter of The Rose of Tralee (before it was televised) was Kevin Hilton.

The festival overcame financial difficulties in 2004, and has strengthened with growing visitor numbers and maintaining strong viewer figures. [5]

Until the year 2008, unmarried mothers were not allowed to enter the contest. [6]

Men also participate in the show in the form of Rose Escorts, who assist the Roses during their time in the festival. The escort who works hardest is named "Escort of the Year", and is invited back to the festival the following year.

The Channel 4 comedy Father Ted parodied the festival in the episode "Rock-a-Hula Ted" where the eponymous character is asked to host the local "Lovely Girls" competition. [2] Will Scally produced and directed a Channel Four documentary called Rose of Tralee.

To celebrate the 50th anniversary of the festival in 2009, 50 Roses took part in the 2009 competition; usually there are around 30.

Michele McCormack (1985 Chicago Rose) has gone on to win an Edward R. Murrow Award in her chosen profession of broadcast journalism. She hosts selection contests in Philadelphia and in the Midwest of the USA. (She credits her interview technique to Gay Byrne, who hosted the contest when she was in Tralee.) Other notable Roses include Aoife Mulholland of Galway (2003) who went on to achieve acclaim as an actor, and Noreen Culhane (New York Rose 1970) now Executive Vice-President of the New York Stock Exchange. 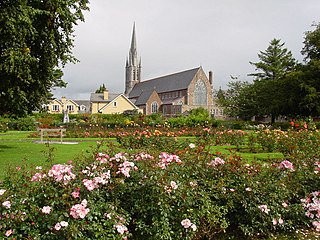 Tralee is the county town of County Kerry in the south-west of Ireland. The town is on the northern side of the neck of the Dingle Peninsula, and is the largest town in County Kerry. The town's population including suburbs was 23,691 as of the 2016 census making it the 8th largest town, and 14th largest urban settlement in Ireland. Tralee is well known for the Rose of Tralee International Festival which has been held annually in August since 1959.

Aoibhinn Ní Shúilleabháin[ˈiːvʲɪnʲ nʲiː ˈhuːlʲəwaːnʲ] is an Irish academic and broadcaster. She is also a past winner of the Rose of Tralee contest, and a musician.

Róisín Ryan Egenton, a 23-year-old woman representing New York, was crowned the Rose of Tralee in the Festival Dome, Tralee, in front of a live audience of over 2,000 on 22 August 2000. Over 1.3m viewers watched the first half of the selection on television Monday night and an estimated 1.5m tuned in again for the second half on Tuesday, the biggest audience ever breaking all records for RTÉ Ireland.

Dáithí Mícheál Ó Sé is an Irish television presenter. He currently hosts RTÉ One's Today, alongside Maura Derrane. He is also the current host of the Rose of Tralee and hosts a chat show on TG4 every Thursday night Seal Le Dáithí.

Alice O'Sullivan is the first ever winner of The Rose of Tralee, having been crowned in 1959. In 2009, she was one of the judges for the fiftieth anniversary of the festival. Rosita Boland of The Irish Times commented on O'Sullivan's admission that she had not watched any of the television coverage of the event in the years since her win: "This has to make her perspective tonight and tomorrow—on the annual mini-dramas of frocks, party pieces and lovely girls—unique among all past and present Rose of Tralee judges".

The 2012 Rose of Tralee was the 53rd edition of the annual Irish international festival, held on 20–21 August 2012 at the Festival Dome, in Tralee, County Kerry. Dáithí Ó Sé returned as host for the third time, just a matter of weeks after marrying the 2008 New Jersey Rose, Rita Talty. 32 contestants participated in the 2012 pageant, with Nicola McEvoy, representing Luxembourg, ultimately crowned the winner. Going into the show, the Dublin and Mayo Roses were tipped as the favourites to win with McEvoy not far behind them. The background music for the event was composed by the Garda Síochána Orchestra.

The 2013 Rose of Tralee was the 54th edition of the annual Irish international festival. The festival ran for a total of 7 days; two additional days were added due to The Gathering Ireland 2013. The festival ran from 14–20 August; concluding with the televised event on the final two nights. Many acts performed in Tralee during the festival, including; JLS, Ryan Dolan, The Coronas, Sharon Shannon and The Stunning. Shane Filan made his debut solo performance during the televised selection show on 20 August.

The 2014 Rose of Tralee was the 55th edition of the annual Irish international festival held on 15–19 August 2014. The international finals of the competition were broadcast live by RTÉ One television on 18–19 August.

The 2016 Rose of Tralee was the 58th edition of the annual Irish international festival held on 22–23 August 2016. The competition was televised live on RTÉ television. 65 women from all over the world took part during the Rose of Tralee festival with 32 going on to the live shows. This was the first year that all 65 roses were invited to Tralee before being reduced to 32 for the live shows.

Tralee Racecourse was a horse racing venue in Tralee, County Kerry, Ireland. It was located at Ballybeggan Park about two miles to the north east of Tralee town centre. It ceased to operate in 2008 with fixtures transferred to other racecourses.

The 2017 Rose of Tralee was the 58th edition of the annual Irish international festival held on 21–22 August 2017. The competition was televised live on RTÉ television. 65 women from all over the world took part during the Rose of Tralee festival with 32 going on to the live shows. This was the first year that there is a Hong Kong Rose in the competition.

The 2018 Rose of Tralee was the 59th edition of the annual Irish international festival held on 20–21 August 2018. The competition was televised live on RTÉ television. 57 women from all over the world took part during the Rose of Tralee festival with 32 going on to the live shows.

A Kerry County Council election was held in County Kerry in Ireland on 24 May 2019 as part of that year's local elections. All 33 councillors were elected for a five-year term of office from 6 local electoral areas (LEAs) by single transferable vote.

Maria Walsh is an Irish politician who has been a Member of the European Parliament (MEP) from Ireland for the Midlands–North-West constituency since July 2019. She is a member of Fine Gael, part of the European People's Party. Outside of politics, she is known for winning the 2014 Rose of Tralee pageant.

Housewife of the Year was an annual contest for housewives in the Republic of Ireland between 1968 and 1995.

The 2019 Rose of Tralee was the 60th edition of the annual Irish international festival held on 26–27 August 2019. The competition was televised live on RTÉ television. 57 women from all over the world took part during the Rose of Tralee festival with 32 going on to the live shows.