The Government of Ireland (Irish : Rialtas na hÉireann) is the cabinet that exercises executive authority in Ireland.

Membership of the cabinet is regulated by Article 28 of the Constitution of Ireland and by the Ministers and Secretaries Acts 1924 to 2017. [2] The Constitution requires the government to consist of between seven and fifteen members, [3] all of whom must be a member of the Oireachtas.

Since the formation of the 12th Government of Ireland in 1966, all Irish cabinets have been formed with the constitutional maximum of fifteen ministers. The total sometimes falls below this number for brief periods following the resignation of individual ministers or the withdrawal of a party from a coalition.

A member of the government in charge of a Department of State is designated a Minister of the Government (before 1977 this position was termed Minister of State). [7] For distinction, Ministers of State (known before 1977 as Parliamentary Secretaries) — informally called junior ministers — are not Ministers of the Government, but assist those Ministers in their Departments. A minister without portfolio may be appointed to the Government who is not the head of a Department of State; this occurred during the period known in Ireland as the Emergency when Frank Aiken served as Minister for the Co-ordination of Defensive Measures from 1939 until 1945. [8] The functions of government ministers are frequently transferred between departments during cabinet reshuffles or after elections. On occasion, a department of state will cease to exist, its functions being transferred to another department. Such defunct ministerial positions include the Ministers for Labour, Posts and Telegraphs, Public Service and Supplies.

Non-members have no voting rights at Cabinet but may otherwise participate fully, and normally receive circulated Cabinet papers on the same basis as a full member of Government. Votes are rare, however, with the cabinet usually following the Taoiseach or working by consensus.

The Government is advised by the Attorney General, who is not formally a member of the Government, but who participates in cabinet meetings as part of their role as legal advisor to the Government.

A new government is formed by the Taoiseach appointed after each general election after receiving the nomination of the Dáil. All members of the government are deemed to have resigned on the resignation of the Taoiseach. Therefore, a new government is appointed where there is a new Taoiseach within a single Dáil term. The Constitution allows a Dáil term of no more than seven years, but a shorter period may be specified by law; this has been set as a maximum of five years. The Taoiseach may at any time advise the President to dissolve the Dáil, prompting a new general election. [14] The President retains absolute discretion to refuse to grant a dissolution to a Taoiseach who has lost the confidence of the Dáil. [15] To date, no President has refused the request of a Taoiseach to dissolve the Dáil.

The Taoiseach must retain the confidence of Dáil Éireann to remain in office. If the Taoiseach ceases "to retain the support of a majority in Dáil Éireann", the Taoiseach must resign unless they seek a dissolution of the Dáil which is granted by the President. This applies only in cases of a motion of no confidence or loss of supply (rejection of a budget), rather than the defeat of the government in other legislation or Dáil votes.

The Taoiseach can direct the President to dismiss or accept the resignation of individual ministers. When the Taoiseach resigns, the entire Government is deemed to have resigned as a collective. However, in such a scenario, according to the Constitution, "the Taoiseach and the other members of the Government shall continue to carry on their duties until their successors shall have been appointed".

Unlike the cabinets in other parliamentary systems, the Government is both the de jure and de facto executive authority in Ireland. In some other parliamentary regimes, the head of state is the nominal chief executive, though bound by convention to act on the advice of the cabinet. In Ireland, however, the Constitution explicitly vests executive authority in the Government, not the President.

The executive authority of the Government is subject to certain limitations. In particular:

Government ministers are collectively responsible for the actions of the government. Each minister is responsible for the actions of his or her department. Departments of State do not have legal personalities. Actions of departments are carried out under the title of ministers even, as is commonly the case when the minister has little knowledge of the details of these actions. This contradicts the rule in common law that a person given a statutory power cannot delegate that power. [27] This leads to a phrase in correspondence by government departments, "the Minister has directed me to write", on letters or documents that the minister in question may never have seen.

If the Government, or any member of the government, should fail to fulfil its constitutional duties, it may be ordered to do so by a court of law, by a writ of mandamus . Ministers who fail to comply may, ultimately, be found to be in contempt of court, and even imprisoned.

All Governments from 1989 to 2020 were coalitions of two or more parties. The first coalition government was formed in 1948. The Taoiseach has almost always been the leader of the largest party in the coalition, with John A. Costello, Taoiseach from 1948 to 1951 and from 1954 to 1957, the only exception to this rule.

Main article: Public service of the Republic of Ireland

The largest sector is the health sector with over 105,000 employees (largely in the Health Service Executive), followed by the education sector with approximately 98,450. [28]

Main article: Civil service of the Republic of Ireland

The civil service of Ireland consists of two broad components, the Civil Service of the Government and the Civil Service of the State. While this partition is largely theoretical, the two parts do have some fundamental operational differences. The civil service is expected to maintain political impartiality in its work, and some parts of it are entirely independent of Government decision making.

Micheál Martin was nominated as Taoiseach by Dáil Éireann on 27 June 2020 and appointed by the president. [29] Martin proposed the nomination of the members of government, and after their approval by the Dáil, they were appointed by the president later that day. [30] [31] There have been a number of changes in the government since that date, notably the appointment of three different agriculture ministers. [32]

The Government of the 29th Dáil or the 26th Government of Ireland was the government of Ireland formed after the 2002 general election which had been held on 17 May 2002. It was led by Fianna Fáil leader Bertie Ahern as Taoiseach, with Progressive Democrats leader Mary Harney as Tánaiste. It was the first, and to date only, coalition government to be returned to government after an election; both parties increased their number of seats, and together secured a Dáil majority, where in the previous government they had governed together as a minority government dependent on the support of Independent TDs.

The Government of the 25th Dáil or the 20th Government of Ireland was the government of Ireland formed after the 1987 general election on 17 February 1987. It was a minority Fianna Fáil government which had the qualified support of Fine Gael, the main opposition party, an arrangement known as the Tallaght Strategy after a speech by its leader Alan Dukes. The national debt had doubled under the previous government. The government introduced budget cuts in all departments. The taxation system was also reformed. One of the major schemes put forward was the establishment of the International Financial Services Centre (IFSC) in Dublin. During this period the Government organised the 1,000-year anniversary of the founding of Dublin.

The Government of the 13th Dáil or the 5th Government of Ireland was the government of Ireland formed after the general election held on 4 February 1948 — commonly known as the First Inter-Party Government — was a government of Fine Gael, the Labour Party, Clann na Poblachta, Clann na Talmhan and the National Labour Party—and one TD who was an independent, James Dillon. The parties had many different aims and viewpoints, but opposition to Fianna Fáil overcame difficulties in forming a government; Éamon de Valera had led a series of single-party Fianna Fáil governments since 1932. The cabinet was made up of representatives of all parties, and ministers were given a great degree of independence. Some key events during the lifetime of the government include the declaration of the Republic of Ireland in 1948 and the crisis surrounding the Mother and Child Scheme in 1951. 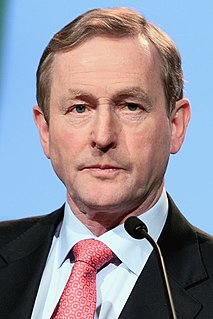 The 24th Government of Ireland was the 2nd Government of the 27th Dáil. Known as the Rainbow Coalition, it was a coalition of Fine Gael, the Labour Party and Democratic Left. The Labour Party had been part of the 23rd Government with Fianna Fáil, formed after the 1992 general election, but left in November 1994 following a number of scandals, particularly those which emerged from the Beef Tribunal and the alleged mishandling of the prosecution of paedophile priest Brendan Smyth. After Albert Reynolds was replaced as Fianna Fáil leader by Bertie Ahern, there was speculation that Labour would rejoin Fianna Fáil in government, but instead it formed a government with two parties which had been in opposition. By-election gains since 1992 meant the three parties had enough TDs between them for an overall majority. It is the only time to date that a new government was formed within the same Dáil term composed of different parties.