Last updated April 23, 2021
This article is about the district. For the constituency, see Suffolk Coastal (UK Parliament constituency).
Non-metropolitan district in England

Suffolk Coastal was a local government district in Suffolk, England. Its council was based in Melton, having moved from neighbouring Woodbridge in 2017. Other towns include Felixstowe, Framlingham, Leiston, Aldeburgh, and Saxmundham.

The district was formed on 1 April 1974, under the Local Government Act 1972, as a merger of the municipal borough of Aldeburgh, along with Felixstowe, Leiston-cum-Sizewell, Saxmundham and Woodbridge urban districts, and Blyth Rural District and Deben Rural District. The population of the district was 124,298 at the 2011 Census. [1]

Below is a list of wards with the number of councillors they returned in the relevant periods. There were 118 civil parishes and towns distributed amongst these wards. 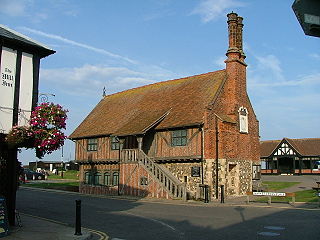 Aldeburgh is a North Sea coastal English town in the county of Suffolk, north of the River Alde. Its estimated population was 2,276 in 2019. It was home to the composer Benjamin Britten and has been the centre of the international Aldeburgh Festival of arts at nearby Snape Maltings, founded by Britten in 1948. It remains an arts and literary centre, with an annual poetry festival and several food festivals and other events. As a Tudor port, Aldeburgh gained borough status in 1529 under Henry VIII. Its historic buildings include a 16th-century moot hall and a Napoleonic-era Martello Tower. Second homes make up about a third of its housing. Visitors are drawn to its Blue Flag shingle beach and fisherman huts, where fresh fish are sold daily, by Aldeburgh Yacht Club, and by its cultural offerings. Two family-run fish and chip shops are listed among the best in the country. 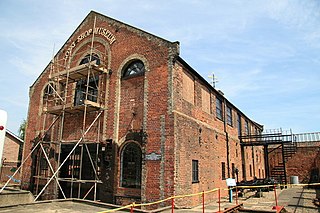 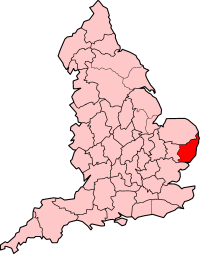 Sizewell is an English fishing hamlet in the East Suffolk district of Suffolk, England. It belongs to the civil parish of Leiston and lies on the North Sea coast just north of the larger holiday village of Thorpeness, between the coastal towns of Aldeburgh and Southwold. It is 2 miles (3.2 km) east of the town of Leiston and belongs within the Suffolk Coast and Heaths AONB. It is the site of two nuclear power stations, one of them still active. There have been tentative plans for a third station to be built at the site.

The East Suffolk line is an un-electrified 49-mile secondary railway line running between Ipswich and Lowestoft in Suffolk, England. The traffic along the route consists of passenger services operated by Greater Anglia, while nuclear flask trains for the Sizewell nuclear power stations are operated by Direct Rail Services. 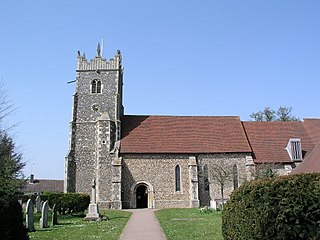 Rushmere St Andrew is a village, civil parish and electoral ward adjacent to part of the eastern edge of the borough of Ipswich in the East Suffolk district of Suffolk, England. The parish includes most of Rushmere Heath and parts of the Ipswich suburb of Broke Hall as well as the village of Rushmere St. Andrew, from which it draws its name.

Suffolk Coastal is a parliamentary constituency in the county of Suffolk, England which has been represented in the House of Commons of the UK Parliament since 2010 by Thérèse Coffey, a Conservative Member of Parliament. She is currently the Work and Pensions Secretary. The constituency is in the far East of England, and borders the North Sea.

Eye was a parliamentary constituency, represented in the House of Commons of the Parliament of the United Kingdom, encompassing an area around the market town and civil parish of Eye, Suffolk.

The IP postcode area, also known as the Ipswich postcode area, is a group of 33 postcode districts in the east of England, within 15 post towns. These cover most of Suffolk, plus southern Norfolk and a very small part of Cambridgeshire.

Suffolk Coastal District Council in Suffolk, England is elected every four years. Since the last boundary changes in 2003, 55 councillors have been elected from 34 wards. 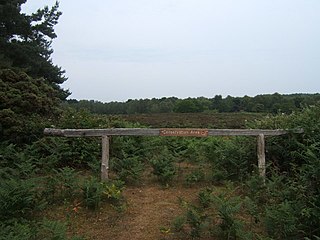 North Warren RSPB reserve is a nature reserve run by the Royal Society for the Protection of Birds (RSPB) in Suffolk, England. It lies on the Suffolk coast on the north edge of the town of Aldeburgh and to the south of Thorpeness and includes the Aldringham Walks area of heathland to the north. It is within the Suffolk Coast and Heaths Area of Outstanding Natural Beauty (AONB) and the Suffolk Heritage Coast area. Noted for its populations of Eurasian bittern, European nightjar and other bird species, it covers a range of coastal habitats and is protected with SSSI, SPA conservation status. 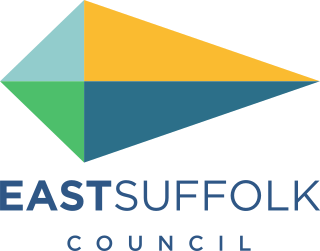 East Suffolk is a local government district in Suffolk, England, which was established on 1 April 2019, following the merger of the existing Suffolk Coastal and Waveney districts. At the 2011 census, the two districts had a combined population of 239,552.

All of the 55 Councillor seats for Suffolk Coastal were up for election on Thursday 5 May 2011. This was held on the same day as other local council elections across England.

All of the 55 Councillor seats for Suffolk Coastal were up for election on Thursday 3 May 2007. This was held on the same day as other local council elections across England.

All of the 55 Councillor seats for Suffolk Coastal were up for election on Thursday 3 May 2003. This was held on the same day as other local council elections across England. The elections were held after boundary changes.

Firefighters Against Cuts was a political party formed in 2003 which fought a small number of seats in the 2003 United Kingdom local elections. It was registered on 20 March 2003.