Syringa (lilac) is a genus of 12 currently recognized [1] species of flowering woody plants in the olive family (Oleaceae), native to woodland and scrub from southeastern Europe to eastern Asia, and widely and commonly cultivated in temperate areas elsewhere. [2] [3] [4] [5]

The genus is most closely related to Ligustrum (privet), classified with it in Oleaceae tribus Oleeae subtribus Ligustrinae. [6]

They are small trees, ranging in size from 2 to 10 metres (6 ft 7 in to 32 ft 10 in) tall, with stems up to 20 to 30 centimetres (7.9 to 11.8 in) diameter. The leaves are opposite (occasionally in whorls of three) in arrangement, and their shape is simple and heart-shaped to broad lanceolate in most species, but pinnate in a few species (e.g. S. protolaciniata, S. pinnatifolia). The flowers are produced in spring, each flower being 5 to 10 millimetres (0.20 to 0.39 in) in diameter with a four-lobed corolla, the corolla tube narrow, 5 to 20 millimetres (0.20 to 0.79 in) long; they are monoecious, with fertile stamens and stigma in each flower. The usual flower colour is a shade of purple (often a light purple or lilac), but white, pale yellow and pink, and even a dark burgundy color are also found. The flowers grow in large panicles, and in several species have a strong fragrance. Flowering varies between mid spring to early summer, depending on the species. The fruit is a dry, brown capsule, splitting in two at maturity to release the two winged seeds. [3] [4] [5] [7]

The genus Syringa was first formally described in 1753 by Carl Linnaeus and the description was published in Species Plantarum . [1] [8] The genus name Syringa is derived from Ancient Greek word syrinx meaning "pipe" or "tube" and refers to the hollow branches of S. vulgaris . [9] [10]

Lilacs are popular shrubs in parks and gardens throughout the temperate zone, and several hybrids and numerous cultivars have been developed. The term French lilac is often used to refer to modern double-flowered cultivars, thanks to the work of prolific breeder Victor Lemoine. Lilacs grow most successfully in well-drained soils, particularly those based on chalk. [14] They flower on old wood, and produce more flowers if unpruned. If pruned, the plant responds by producing fast-growing young vegetative growth with no flowers, in an attempt to restore the removed branches. Lilac bushes can be prone to powdery mildew disease.

The wood of lilac is close-grained, diffuse-porous, extremely hard and one of the densest in Europe.[ citation needed ] The sapwood is typically cream-coloured and the heartwood has various shades of brown and purple. Lilac wood has traditionally been used for engraving, musical instruments, knife handles etc.[ citation needed ] When drying, the wood has a tendency to be encurved as a twisted material, and to split into narrow sticks.

Lilacs are often considered to symbolize love (see language of flowers). In Greece, Lebanon, and Cyprus, the lilac is strongly associated with Easter time because it flowers around that time; it is consequently called paschalia.

In the poem "When Lilacs Last in the Dooryard Bloom'd", by Walt Whitman, lilacs are a reference to Abraham Lincoln.

Syringa vulgaris is the state flower of New Hampshire, because it "is symbolic of that hardy character of the men and women of the Granite State" (New Hampshire Revised Statute Annotated (RSA) 3:5).

Speranskia is a plant genus of the family Euphorbiaceae first described in 1858. It is the only genus of the subtribe Speranskiinae. The entire genus is endemic to China.

The 10th National Games of the People's Republic of China was a multi-sport event that was held in Nanjing City, Jiangsu Province, from 12–23 October 2005.

Castanea mollissima, also known as the Chinese chestnut, is a member of the family Fagaceae, and a species of chestnut native to China, Taiwan, and Korea.

Syringa reticulata, the Japanese tree lilac. is a species of flowering plant in the family Oleaceae native to eastern Asia, which is grown as an ornamental in Europe and North America.

Sinacalia is a genus of Chinese plants in the groundsel tribe within the daisy family.

Spodiopogon is a genus of Asian plants in the grass family. 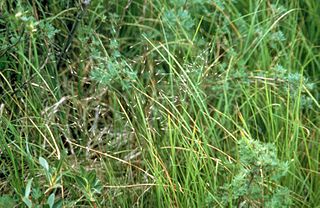 Ptilagrostis is a genus of grasses in the family Poaceae. They are distributed in Asia and North America. They are known commonly as false needlegrasses. 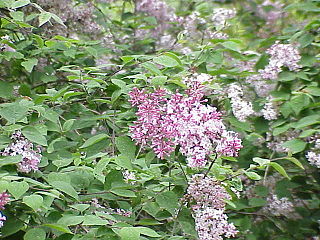 Syringa pubescens is a species of flowering plant in the lilac genus of the family Oleaceae, native to Korea and China.

Aethes amurensis is a species of moth of the family Tortricidae. It is found in Russia, China and Korea.

Cochylimorpha lungtangensis is a species of moth of the family Tortricidae. It is found in China.

Eupoecilia amphimnesta is a species of moth of the family Tortricidae. It is found in China, Taiwan, India, Japan, Korea, Mongolia, Russia and Europe.

Syringa oblata is a species in the genus Syringa, in the family Oleaceae. It is also known as early blooming lilac or broadleaf lilac.

Syringa oblatasubsp.dilatata, also known as Korean early lilac, is a subspecies of the species Syringa oblata in the genus Syringa, in the family Oleaceae.