Thoosuchus (meaning "active crocodile") is an extinct genus of basal trematosauroid trematosaurian temnospondyl. Fossils have been found from Russia and date back to the Early Triassic. It is the type genus of the family Thoosuchidae, formerly called the subfamily Thoosuchinae and placed within Benthosuchidae. [1] [2] [3] The benthosuchids were originally composed of the majority of basal trematosaurian forms regarded as the ancestors of the trematosaurids. [4] [5] [6] [7] [8] Although the genus was first named in 1940, material from one species, E. yakovlevi, was originally tentatively referred to Trematosuchus in 1926. [9]

For its family, Thoosuchus was fairly small, reaching a little over 60 cm with a 15 cm skull. [10]

Thoosuchus superficially resembles the more derived trematosaurids, but can be distinguished from them on the basis of a deep, narrowing otic notch. [11] [12] It had widely spaced orbits and a moderately elongated skull roof that was well ornamented with ridges and grooves, especially on the parietals. [13] This ornamentation is also a characteristic of trematosaurids and has been described as representing a "zone of intensive growth". [14] [15] The well developed lateral line system of Thoosuchus is indicative of its presumed aquatic lifestyle.

Russian paleontologist Ivan Yefremov [Efremov] named it Thoosuchus "active crocodile" (from Ancient Greek θοός (thoos) "nimble, active" and σοῦχος (soukhos) "crocodile") in 1940, "in view of its obviously more active mode of life in water than the mode of life of Benthosuchus " (page 13). [1] 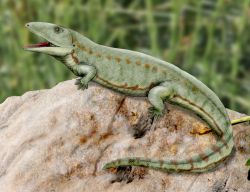 "Labyrinthodontia" is an informal grouping of extinct predatory amphibians which were major components of ecosystems in the late Paleozoic and early Mesozoic eras. Traditionally considered a subclass of the class Amphibia, modern classification systems recognize that labyrinthodonts are not a formal natural group (clade) exclusive of other tetrapods. Instead, they consistute an evolutionary grade, ancestral to living tetrapods such as lissamphibians and amniotes. "Labyrinthodont"-grade vertebrates evolved from lobe-finned fishes in the Devonian, though a formal boundary between fish and amphibian is difficult to define at this point in time.

Temnospondyli is a diverse order of small to giant tetrapods—often considered primitive amphibians—that flourished worldwide during the Carboniferous, Permian, and Triassic periods. A few species continued into the Jurassic and Cretaceous periods. Fossils have been found on every continent. During about 210 million years of evolutionary history, they adapted to a wide range of habitats, including freshwater, terrestrial, and even coastal marine environments. Their life history is well understood, with fossils known from the larval stage, metamorphosis, and maturity. Most temnospondyls were semiaquatic, although some were almost fully terrestrial, returning to the water only to breed. These temnospondyls were some of the first vertebrates fully adapted to life on land. Although temnospondyls are considered amphibians, many had characteristics, such as scales and armour-like bony plates, that distinguish them from modern amphibians (lissamphibians).

Rhinesuchus is a large temnospondyl amphibian. Remains of the genus are known from the Permian of the South African Karoo Basin's Tapinocephalus and Cistecephalus assemblage zones, both belonging to the Beaufort Group. The skull of Rhinesuchus had a flat triangular shape with blunt snout similar to some of the other large amphibians, and had a palate filled with small sharp teeth, suggesting that it hunted fish. Also, the small eyes were on top of the head suggesting that it approached its prey from below. It is a popular misconception that Rhinesuchus is named after the Rhine River in Europe; Rhinesuchus actually gets its name from the Greek word for nose. The type species is Rhinesuchus whaitsi. Two more species, R. africanus and R. wadiai, are considered to be nomen dubium. R. broomianus and R. beaufortensis have been synonymized with R. whaitsi, while R. capensis has been moved out of the genus into Rhinesuchoides. Muchocephalus has also been synonymized with R. whaitsi. The first rhinesuchid from outside southern Africa was described as Rhinesuchus wolgodvinensis. The specimen, collected from Early Triassic beds from Russia, was considered the first Rhinesuchus from the Triassic, although currently it is considered, instead, a wetlugasaurid.

Eryosuchus is an extinct genus of capitosauroid temnospondyl amphibian from the Middle Triassic of northern Russia. It was a very large predator: largest specimen known could reach up to 3.5 m (11.5 ft) in length, with a skull over 1 m long. 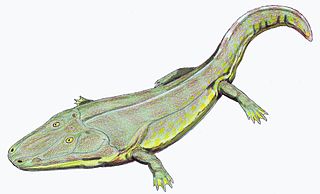 Cyclotosaurus is an extinct genus of temnospondyl within the family Mastodonsauridae. It was of great size for an amphibian, had an elongated skull up to 56 cm (22 in). 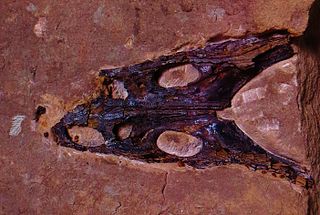 Trematosaurus is an extinct genus of trematosaurid temnospondyl amphibian found in Germany and Russia. It was first named by Hermann Burmeister in 1849 and the type species is Trematosaurus brauni.

Dvinosaurus is an extinct genus of amphibious temnospondyls localized to regions of western and central Russia during the Late Permian, approximately 265-254 million years ago. Its discovery was first noted in 1921 by Russian paleontologist Vladimir Prokhorovich Amalitskii in a posthumously published paper that documents the findings of a site in Russia's Arkhangelsk District. Its name is derived from the proximity of this site to the Northern Dvina River.

Konzhukovia is an amphibian genus that belongs to an extinct group of temnospondyls, the largest clade of basal tetrapods including about 198 genera, 292 species, and more than half of which were alive during the early Mesozoic period. The animal was a predator that lived about 260 million years ago, and could get up to about 3 meters in length. Specifically, Konzukovia lived during the Permian, between 252 and 270 million years ago according to the type of rock the fossil was found in. There are three species within this genus, K. vetusta, K. tarda, and K. sangabrielensis, the first two originating from Russia while the latest originating from Southern Brazil. The discovery of this specimen in Southern Brazil provided more evidence to support the idea that during this animals existence, there was a “biological corridor” because of the supercontinent Pangea, allowing these species to be found so far apart from each other. Konzhukovia belongs to the family Archegosauridae, a family consisted of large temnospondyls that most likely compare to modern day crocodiles. Since the discovery of the latest species, K. sangabrielensis Pacheco proposes that there must be the creation of a new family, Konzhokoviidae, a monophyletic group in a sister-group relationship with Stereospondlyi in order to accommodate the three species. Konzhukovia skulls usually exhibit typical rhinesuchid features including an overall parabolic shape, small orbits located more posteriorly, and the pterygoids do not reach the vomer. These animals were long-snouted amphibians that had clear adaptations made for fish catching, as well as exemplifying aquatic features. 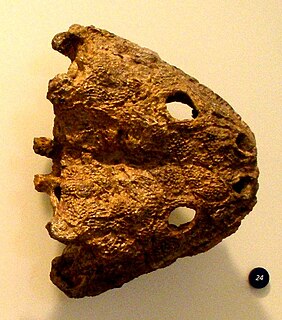 Brachyopoidea is a superfamily of temnospondyls that lived during the Mesozoic. It contains the families Brachyopidae and Chigutisauridae. The earliest records of brachyopids are from the Lower Triassic in Australia. The latest-surviving member of the superfamily is the chigutisaurid Koolasuchus from the Early Cretaceous of Australia. 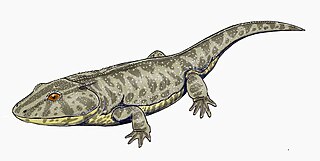 Lydekkerinidae is a family of stereospondyl temnospondyls that lived in the Early Triassic period. During this time period, lydekkerinids were widely distributed, with putative remains reported from Russia, Greenland, India, South Africa, Madagascar, Australia, and Antarctica. In contrast to most other stereospondyls, lydekkerinids were relatively small-bodied. The type genus is Lydekkerina, the namesake of the family and the best-known lydekkerinid.

Rhytidosteoidea is a superfamily of Temnospondyli, early amphibian species that existed during the Carboniferous, Permian, and Triassic periods. The taxon was established in 1965 to accommodate two new species of Deltasaurus, the author recognising an alliance with previously described genera.

Bukobaja is an extinct genus of mastodonsaurid temnospondyl from the middle Triassic of Russia. It contains a single species, Bukobaja enigmatica. Bukobaja mainly occurs in the Bukobay Svita as part of the Ladinian?-age "Mastodonsaurus fauna", a section of Russian Triassic biostratigraphy characterized by "Mastodonsaurus" torvus. It was also present in the underlying Donguz Svita. Bukobaja appears to be a valid genus similar to, yet distinct from, Mastodonsaurus. Despite appearing to possess several unique features, Bukobaja is still known from very few remains. This has led to difficulties in determining its relations more precisely than "Mastodonsauridae incertae sedis". It has also been compared to trematosaurids.

Lydekkerina is an extinct genus of stereospondyl temnospondyl. It is the type genus of the family Lydekkerinidae. Fossils have been collected from Early Triassic deposits in South Africa and Australia. The type species is L. huxleyi, first described in 1889. While most other stereospondyls were semiaquatic, Lydekkerina was exclusively terrestrial.

Luzocephalus is an extinct genus of temnospondyl amphibian from the Early Triassic of Russia. It is usually regarded as a member of the family Lydekkerinidae, although it has also been placed in the family Trematosauridae.

Lapillopsis is an extinct genus of stereospondyl temnospondyl within the family Lapillopsidae. Fossils belonging to the genus have been found in the Arcadia Formation of Queensland, Australia. 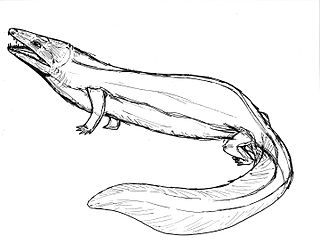 Trematosuchus is an extinct genus of trematosaurian temnospondyl within the family Trematosauridae from South Africa. It was first named by Haughton in 1915 as Trematosaurus sobeyi. It was assigned to its own genus Trematosuchus by Watson in 1919. 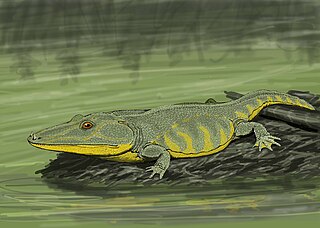 Capitosauria is an extinct group of large temnospondyl amphibians with simplified stereospondyl vertebrae. Mainly living as piscivores in lakes and rivers, the Capitosauria and its sister taxon Trematosauria were the only major labyrinthodonts that existed during the Mesozoic in ecological niches broadly similar to those of modern crocodiles, and some grew to very large sizes. At 6 meters in length, the Mid-Triassic Mastodonsaurus giganteus is not only thought to have been the largest capitosaur, but possibly also the largest amphibian to have lived. The latest known remains are from the Rhaetian of Germany and are referred to Cyclotosaurus.

Selenocara is an extinct genus of mastodonsauroid temnospondyl. The type species is Selenocara groenlandica, described by Gunnar Säve-Söderbergh in 1935 on the basis of skull bones from the Lower Triassic Wordie Creek Formation of Greenland. Säve-Söderbergh originally described it as a new species of Wetlugasaurus.