Trucheosaurus is an extinct genus of rhytidosteid temnospondyl from the Late Permian period of the Sydney Basin, New South Wales, Australia. It is known from the holotype materials MMF 12697a, a partially complete skull, AMF 50977, an articulated postcranial skeleton and BMNHR 3728, the counterpart of both skull and postcranial skeleton, recovered from the Glen Davis Formation. This genus was named by Watson in 1956, and the type species is Trucheosaurus major. [1] 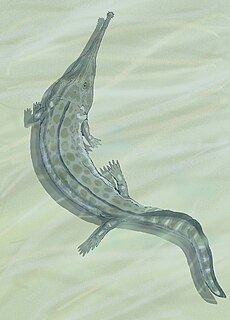 Prionosuchus is an extinct genus of large temnospondyl. A single species, P. plummeri, is recognized from the early Permian period. Its fossils have been found in what is now northeastern Brazil. 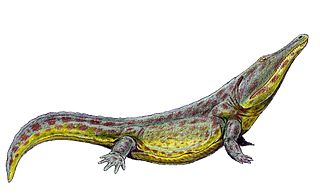 Konzhukovia is an amphibian genus that belongs to an extinct group of temnospondyls, the largest clade of basal tetrapods including about 198 genera, 292 species, and more than half of which were alive during the early Mesozoic period. The animal was a predator that lived about 260 million years ago, and could get up to about 3 meters in length. Specifically, Konzukovia lived during the Permian, between 252 and 270 million years ago according to the type of rock the fossil was found in. There are three species within this genus, K. vetusta, K. tarda, and K. sangabrielensis, the first two originating from Russia while the latest originating from Southern Brazil. The discovery of this specimen in Southern Brazil provided more evidence to support the idea that during this animals existence, there was a “biological corridor” because of the supercontinent Pangea, allowing these species to be found so far apart from each other. Konzhukovia belongs to the family Archegosauridae, a family consisted of large temnospondyls that most likely compare to modern day crocodiles. Since the discovery of the latest species, K. sangabrielensis Pacheco proposes that there must be the creation of a new family, Konzhokoviidae, a monophyletic group in a sister-group relationship with Stereospondlyi in order to accommodate the three species. Konzhukovia skulls usually exhibit typical rhinesuchid features including an overall parabolic shape, small orbits located more posteriorly, and the pterygoids do not reach the vomer. These animals were long-snouted amphibians that had clear adaptations made for fish catching, as well as exemplifying aquatic features. 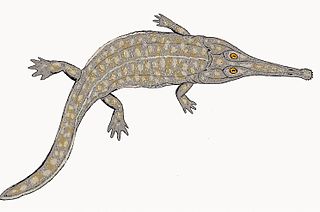 Australerpeton is an extinct genus of stereospondylomorph temnospondyl currently believed to belong to the family Rhinesuchidae. When first named in 1998, the genus was placed within the new family Australerpetontidae. However, studies published a few years later questioned the systematics used in the original description and included the genus within Archegosauridae. A study by Dias & Schultz (2003) reassigned Australerpeton to the family Rhinesuchidae within the suborder Stereospondyli based on an earlier evaluation of the family. In this study, the close similarities between Australerpeton and archegosaurids were attributed to convergent evolution as a result of similar semi-aquatic lifestyles. A redescription of the skeleton of this genus was published by Eltink & Langer in 2014, and the skull was redescribed in a follow-up study published by Eltink et al. in 2016. These studies, as well as a 2017 study focusing on rhinesuchids in general, confirmed that Australerpeton was a rhinesuchid rather than an archegosaurid. Fossils of the genus have been found in the Rio do Rasto Formation of Brazil.

Deltasaurus is an extinct genus of Carnian temnospondyl amphibian of the family Rhytidosteidae. 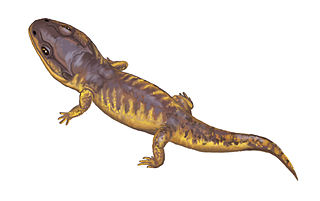 Rhytidosteidae is a family of Temnospondyli that lived in the Permian and Triassic.

Indobrachyops is an extinct genus of temnospondyl amphibian from the Early Triassic of India. It is known from a nearly complete fossil skull that was first described by paleontologists Friedrich von Huene and M. R. Sahni in 1958 from the Panchet Formation in Raniganj Coalfield. Indobrachyops belongs to a group of mostly semi-aquatic temnospondyls called Stereospondyli, but its exact placement within the group has been uncertain since its first description.

Luzocephalus is an extinct genus of temnospondyl amphibian from the Early Triassic of Russia. It is usually regarded as a member of the family Lydekkerinidae, although it has also been placed in the family Trematosauridae. 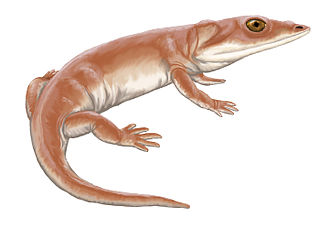 Lapillopsis is an extinct genus of stereospondyl temnospondyl within the family Lapillopsidae. Fossils belonging to the genus have been found in the Arcadia Formation of Queensland, Australia.

Rhineceps is an extinct genus of temnospondyl amphibian in the family Rhinesuchidae. Rhineceps was found in Northern Malawi in Southern Africa known only from its type species R. nyasaensis. Rhineceps was a late Permian semi-aquatic carnivore that lived in streams, rivers, lakes or lagoons. Rhineceps is an early divergent Stereopondyl within the family Rhinesuchidae, which only existed in the late Permian (Lopingian) and failed to survive the Permian-Triassic extinction unlike other stereospondyl families.

Trimerorhachis is an extinct genus of dvinosaurian temnospondyl within the family Trimerorhachidae. It is known from the Early Permian of the southwestern United States, with most fossil specimens having been found in the Texas Red Beds. The type species of Trimerorhachis, T. insignis, was named by American paleontologist Edward Drinker Cope in 1878. Cope named a second species from Texas, T. mesops, in 1896. The species T. rogersi and T. greggi are also from Texas, and the species T. sandovalensis is from New Mexico.

Pneumatostega is an extinct genus of rhytidosteid temnospondyl from the early Triassic period of Cape Province of South Africa. It is known from the holotype BPI F981, a dorsal mould of a skull roof and from the referred specimen SAM 11188, partial skull fragments and postcranial remains recovered from the Lystrosaurus Assemblage Zone in the Beaufort Group near Middelburg. This genus was named by J. W. Cosgriff and J. M. Zawiskie in 1979, and the type species is Pneumatostega potamia. 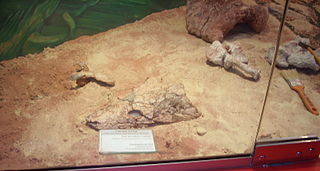 Sangaia is an extinct genus of rhytidosteid temnospondyl from the early Triassic period of Rio Grande do Sul, Brazil. It is known from the holotype UMVT 4302, the left half of a partial skull, a partial palate, from the paratype UMVT 4303, a partial right palatal fragment and from the referred specimens PV 0497 T and MCN PV 2606, skull fragments, recovered from the Sanga do Cabral Formation in the Rośario do Sul Group.

Arachana is an extinct genus of rhinesuchid-like temnospondyl known from the Early Triassic Buena Vista Formation of northeastern Uruguay. Arachana was first named by Graciela Piñeiro, Alejandro Ramos and Claudia Marsicano in 2012 and the type species is A. nigra. It shares characteristics with both rhinesuchids and lydekkerinids, making it a transitional form between basal and more advanced stereospondyls.

Rotaryus is an extinct genus of Early Permian trematopid dissorophoid temnospondyl known from the Free State of Thuringia of central Germany.

Derwentiinae is a subfamily of rhytidosteid temnospondyls from the Permian and Triassic periods of Australia and India. It includes the genera Arcadia, Deltasaurus, Derwentia, Indobrachyops, and Rewana. Derwentiinae was named in a 2011 study that analyzed the phylogenetic relationships of rhytidosteids. It was a replacement name for the family Derwentiidae, which was named in 2000.

Vigilius is an extinct genus of brachyopid temnospondyl amphibian from the Triassic of Arizona. It is known from the single type species Vigilius wellesi. 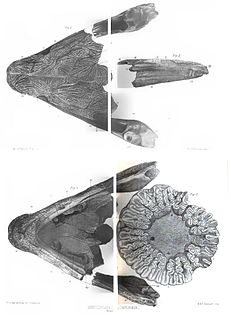 Rhytidosteus is an extinct genus of temnospondyl amphibian from the Early Triassic of South Africa. In 2019, the remains were also discovered in the Astrakhan region, Russia.

Teyujagua is an extinct genus of small, probably semi-aquatic archosauromorph reptile that lived in Brazil during the Early Triassic period. The genus contains the type and only known species, T. paradoxa. It is known from a well-preserved skull, and probably resembled a crocodile in appearance. It was an intermediary between the primitive archosauromorphs and the more advanced Archosauriformes, revealing the mosaic evolution of how the key features of the archosauriform skull were acquired. Teyujagua also provides additional support for a two-phase model of archosauriform radiation, with an initial diversification in the Permian followed by a second adaptive radiation in the Early Triassic.