Thrikkalathoor is a village in Ernakulam district of Kerala state (India), [1] [2] located near to the towns of Perumbavoor, Muvattupuza and Kothamangalam.

The Thrikkalathoor village consists of the following places:

The population of Thrikkalthoor includes Hindus, Syriac Christians and Muslims.

Aluva, IPA: [ɐːluʋɐ], is a region in the city of Kochi in Kerala, India. It is also a part of the Kochi metropolitan area and is situated around 15 km (9.3 mi) from the city center on the banks of Periyar River. A major transportation hub, with easy access to all major forms of transportation, Aluva acts as a corridor which links the highland districts to the rest of the state. Cochin International Airport at Nedumbassery is 11.7 km from Aluva. Aluva is accessible through rail, air, metro along with major highways and roadlines. Aluva KSRTC bus station is an important transport hub in Kerala and one of the busiest stations in central part of the state.

Nattika is a small village in Thrissur district of Kerala state, South India. It is centrally located about 25 km from Thrissur, Kodungallur, Irinjalakuda, Chavakkad, Kunnamkulam and Guruvayur. Nattika is beside the Arabian Sea. There is a beach in this village called Nattika Beach. Nattika Beach was previously known as Attakuzhi Bandhar Kadapuram. Nattika is on the west coast of Thrissur. Conolly Canal is the eastern border of Nattika. There is a private bus stand in Thriprayar. Nattika is 60 km away from Cochin International Airport and 25 km away from Thrissur Railway Station. Modern transportation and better communication facilities are available in the village. This is an assembly constituency.

P. C. Thomas, is an Indian politician who was Union Minister of State for Law and Justice for Kerala from 2003 to 2004 and a six-term member of Lok Sabha from 1989 to 2009. He is the Deputy Chairman of of Kerala Congress

The town of Muvattupuzha in Kerala, India contains places of worship for Hindus, Syrian Christians and Mappila Muslims. 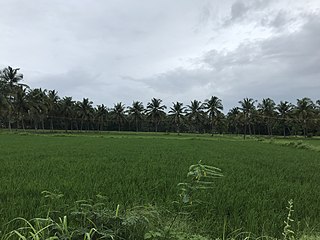 Yakkara, is a village under Palakkad District in the Indian state of Kerala. It is located approximately 6 kilometers from Palakkad Junction. Palakkad Town railway station also lies nearby. The Village is located near to NH 544 Salem - Kochi National Highway and is predominantly segregated as West Yakkara and East Yakkara