Last updated December 06, 2020
Not to be confused with Tietz syndrome.

Tietze syndrome (also called costochondral junction syndrome) is a benign inflammation of one or more of the costal cartilages. [1] It was first described in 1921 by the German surgeon Alexander Tietze (1864–1927). [2] [3]

The main presentation of the syndrome is significant, acute pain in the chest, along with tenderness and some swelling of the cartilages affected, which is commonly palpable on examination. Perceived pain is often exacerbated with respiration. [5] Although many times it can be extremely painful, to the point of being debilitating, Tietze's syndrome is considered to be a benign condition that generally resolves in 12 weeks. However, it can often be a chronic condition. The associated chest pain may present similarly to angina pectoris, normally associated with heart disease, and can cause hyperventilation, anxiety or panic attacks, syncope (passing out), and temporary hypoesthesia (numbness) paralysis, and due to pain high blood pressure or hypertension. In some cases, the pain may be perceived as 10 to 20 times more painful than normalized costochondritis.

Many cases of myocardial infarction (heart attack) patients have been re-considered and improperly diagnosed, due to the identical nature of the symptoms. In females, it is often misdiagnosed as mastalgia. Costochondritis symptoms are similar to Tietze's, the prime difference being that the pain radiates to the arms and shoulders in the latter.

Tietze's syndrome is not thought to be an inherited condition [6] and it affects males and females equally. [1]

Psychological stress can exacerbate Tietze's syndrome through chest muscle contraction, but there is no evidence to suggest that it is a direct cause[ citation needed ].

Patients who have had radiation therapy to the chest/breast will often experience this syndrome which can occur shortly after therapy or years later. It is found more often in teens than adults.[ citation needed ]

Although patients will often mistake the pain of Tietze's syndrome for a myocardial infarction (heart attack), the syndrome does not progress to cause harm to any organs. Other potential causes for chest pain include cardiac, gastrointestinal, or traumatic injury.

It is important to rule out a heart attack, as the symptoms may be similar or severe. After assessment, providers often reassure patients that their symptoms are not associated with a heart attack, although they may need to treat the pain, which in some cases can be severe enough to cause significant, though temporary, disability to the patient. Pain relief is achieved with the use of analgesics.

After medical assessment and confirmation of no immediate cardiology events, especially heart attack, normal treatment includes rest by reducing activities affecting the chest. Administering anti-inflammatory drugs including naproxen, ibuprofen, aspirin, and acetaminophen [7] is recommended. For very painful and debilitating events, where the pain is unbearable or requires emergency care, Toradol is generally prescribed and administered by direct injection. [8] This can relieve most of the pain in 5 to 10 minutes. Other treatment steps include physical therapy, applying ice packs on the chest area to reduce the swelling, and applying an analgesic patch that may also contain lidocaine. Glucocorticoid steroids may be prescribed in order to reduce the inflammation. [7] If the pain is reoccurring, doctors may also recommend tricyclic antidepressants such as amitriptyline, which is often used to control pain when patients find it difficult to sleep at night. The anti-seizure medication gabapentin (Neurontin) has also proven successful in controlling chronic pain. [9] If the pain is severe enough and reoccurring, a doctor may prescribe a medication containing codeine, such as Codeine/Acetaminophen (Tylenol No.1, No.2, No.3 or No.4). However, because codeine can be habit forming, it is generally only prescribed when Toradol or other analgesics have failed to provide sufficient relief. [10] [11]

Angina, also known as angina pectoris, is chest pain or pressure, usually due to not enough blood flow to the heart muscle.

Heartburn, also known as pyrosis, cardialgia or acid indigestion, is a burning sensation in the central chest or upper central abdomen. The discomfort often rises in the chest and may radiate to the neck, throat, or angle of the arm. 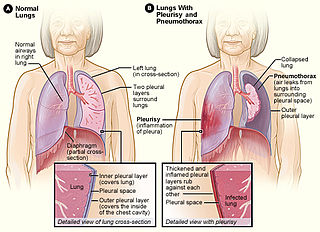 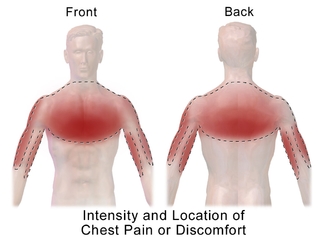 Chest pain is pain or discomfort in the chest, typically the front of the chest. It may be described as sharp, dull, pressure, heaviness or squeezing. Associated symptoms may include pain in the shoulder, arm, upper abdomen or jaw or nausea, sweating or shortness of breath. It can be divided into heart-related and non-heart-related pain. Pain due to insufficient blood flow to the heart is also called angina pectoris. Those with diabetes or the elderly may have less clear symptoms.

Dextropropoxyphene is an analgesic in the opioid category, patented in 1955 and manufactured by Eli Lilly and Company. It is an optical isomer of levopropoxyphene. It is intended to treat mild pain and also has antitussive and local anaesthetic effects. The drug has been taken off the market in Europe and the US due to concerns of fatal overdoses and heart arrhythmias. It is still available in Australia, albeit with restrictions after an application by its manufacturer to review its proposed banning. Its onset of analgesia is said to be 20–30 minutes and peak effects are seen about 1.5–2.0 hours after oral administration. Dextropropoxyphene is sometimes combined with acetaminophen. Trade names include Darvocet-N, Di-Gesic, and Darvon with APAP. The British approved name of the paracetamol/dextropropoxyphene preparation is co-proxamol ; however, it has been withdrawn since 2007, and is no longer available to new patients, with exceptions. The paracetamol combination(s) are known as Capadex or Di-Gesic in Australia, Lentogesic in South Africa, and Di-Antalvic in France. 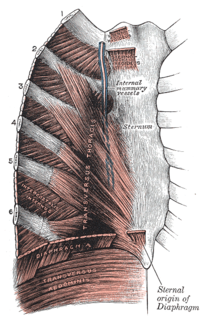 Costochondritis, also known as chest wall pain, costosternal syndrome, or costosternal chondrodynia is an acute and often temporary inflammation of the costal cartilage, the structure that connects each rib to the sternum at the costosternal joint. The condition is a common cause of chest pain. Though costochondritis often resolves on its own, it can be a recurring condition that has little or no signs of onset. 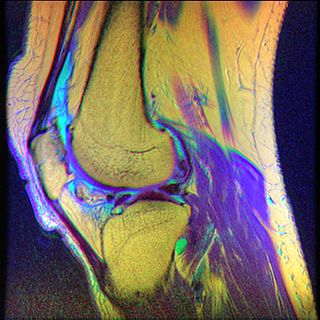 Chondromalacia patellae is an inflammation of the underside of the patella and softening of the cartilage. 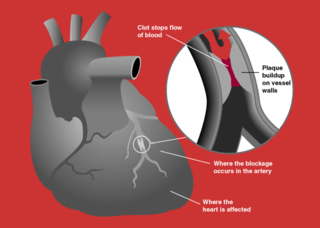 Acute coronary syndrome (ACS) is a syndrome due to decreased blood flow in the coronary arteries such that part of the heart muscle is unable to function properly or dies. The most common symptom is chest pain, often radiating to the left shoulder or angle of the jaw, crushing, central and associated with nausea and sweating. Many people with acute coronary syndromes present with symptoms other than chest pain, particularly women, older patients, and patients with diabetes mellitus.

Snapping hip syndrome, also referred to as dancer's hip, is a medical condition characterized by a snapping sensation felt when the hip is flexed and extended. This may be accompanied by a snapping or popping noise and pain or discomfort. Pain often decreases with rest and diminished activity. Snapping hip syndrome is commonly classified by the location of the snapping as either extra- articular or intra-articular. 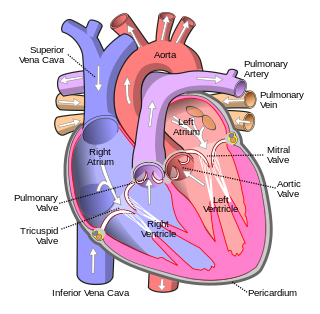 Lutembacher's syndrome is a very rare form of congenital heart disease that affects one of the chambers of the heart as well as a valve. It is commonly known as both congenital atrial septal defect (ASD) and acquired mitral stenosis (MS). Congenital atrial septal defect refers to a hole being in the septum or wall that separates the two atria; this condition is usually seen in fetuses and infants. Mitral stenosis refers to mitral valve leaflets sticking to each other making the opening for blood to pass from the atrium to the ventricles very small. With the valve being so small, blood has difficulty passing from the left atrium into the left ventricle. Septal defects that may occur with Lutembacher's syndrome include: Ostium primum atrial septal defect or ostium secundum which is more prevalent. 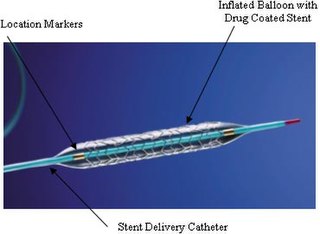 A coronary stent is a tube-shaped device placed in the coronary arteries that supply blood to the heart, to keep the arteries open in the treatment of coronary heart disease. It is used in a procedure called percutaneous coronary intervention (PCI). Coronary stents are now used in more than 90% of PCI procedures. Stents reduce angina and have been shown to improve survivability and decrease adverse events in an acute myocardial infarction.

Ovarian diseases are conditions that happen to young women which can affect their reproductive system and general health.

Hemopericardium refers to blood in the pericardial sac of the heart. It is clinically similar to a pericardial effusion, and, depending on the volume and rapidity with which it develops, may cause cardiac tamponade.

A myocardial infarction (MI), commonly known as a heart attack, occurs when blood flow decreases or stops to a part of the heart, causing damage to the heart muscle. The most common symptom is chest pain or discomfort which may travel into the shoulder, arm, back, neck or jaw. Often it occurs in the center or left side of the chest and lasts for more than a few minutes. The discomfort may occasionally feel like heartburn. Other symptoms may include shortness of breath, nausea, feeling faint, a cold sweat or feeling tired. About 30% of people have atypical symptoms. Women more often present without chest pain and instead have neck pain, arm pain or feel tired. Among those over 75 years old, about 5% have had an MI with little or no history of symptoms. An MI may cause heart failure, an irregular heartbeat, cardiogenic shock or cardiac arrest. 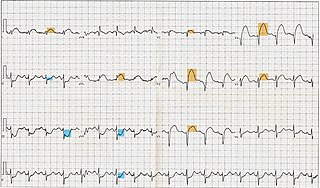 Visceral pain is pain that results from the activation of nociceptors of the thoracic, pelvic, or abdominal viscera (organs). Visceral structures are highly sensitive to distension (stretch), ischemia and inflammation, but relatively insensitive to other stimuli that normally evoke pain such as cutting or burning. Visceral pain is diffuse, difficult to localize and often referred to a distant, usually superficial, structure. It may be accompanied by symptoms such as nausea, vomiting, changes in vital signs as well as emotional manifestations. The pain may be described as sickening, deep, squeezing, and dull. Distinct structural lesions or biochemical abnormalities explain this type of pain in only a proportion of patients. These diseases are grouped under gastrointestinal neuromuscular diseases (GINMD). Others can experience occasional visceral pains, often very intense in nature, without any evidence of structural, biochemical or histolopathologic reason for such symptoms. These diseases are grouped under functional gastrointestinal disorders (FGID) and the pathophysiology and treatment can vary greatly from GINMD. The two major single entities among functional disorders of the gut are functional dyspepsia and irritable bowel syndrome.

Chest pain in children is the pain felt in the chest by infants, children and adolescents. In most cases the pain is not associated with the heart. It is primarily identified by the observance or report of pain by the infant, child or adolescent by reports of distress by parents or caregivers. Chest pain is not uncommon in children. Many children are seen in ambulatory clinics, emergency departments and hospitals and cardiology clinics. Most often there is a benign cause for the pain for most children. Some have conditions that are serious and possibly life-threatening. Chest pain in pediatric patients requires careful physical examination and a detailed history that would indicate the possibility of a serious cause. Studies of pediatric chest pain are sparse. It has been difficult to create evidence-based guidelines for evaluation.

Pain management in children is the assessment and treatment of pain in infants and children.