Tommy Sugiarto is the son of the former badminton world champion Icuk Sugiarto. [4] He has also a younger sister named Jauza Fadhila Sugiarto (born 1999) who is also a badminton player and represented Indonesia in the 2014 BWF World Junior Championships. [5] In December 2016, he married Annisa Nur Ramadhani. [6]

The BWF Superseries, which was launched on 14 December 2006 and implemented in 2007, [9] is a series of elite badminton tournaments, sanctioned by the Badminton World Federation (BWF). BWF Superseries levels are Superseries and Superseries Premier. A season of Superseries consists of twelve tournaments around the world that have been introduced since 2011. [10] Successful players are invited to the Superseries Finals, which are held at the end of each year.

(W) Won; (F) finalist; (SF) semifinalist; (QF) quarterfinalist; (#R) rounds 4, 3, 2, 1; (RR) round-robin stage; (Q#) qualification round; (A) absent; (G) gold, (S) silver or (B) bronze medal; (NH) not held; (N/A) not applicable.
To avoid confusion and double counting, these charts are updated at the conclusion of a tournament or when the player's participation has ended. 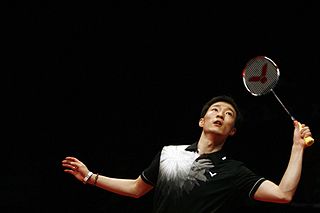 Lee Hyun-il is a badminton player from South Korea.He was the World and Asian Championships bronze medalists, and was part of South Korean team that won the 2003 Sudirman Cup as well in 2002 and 2014 Asian Games. 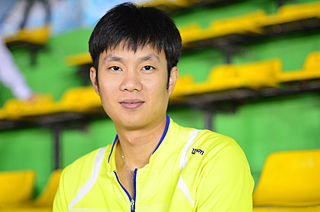 Boonsak Ponsana is a male badminton player from Thailand. His younger sister Salakjit Ponsana is also part of the Thailand badminton team. He got a Bachelor of Laws from Sri Patum.

Simon Santoso is an Indonesian former badminton player. He was two time Southeast Asian Games men's singles champion winning in 2009 and 2011, also featured in Indonesia team that won the men's team title in 2003, 2007, 2009, and 2011. Santoso won the Indonesia Open a Superseries Premier tournament in 2012. He reached a career high as world number 3 in August 2010. 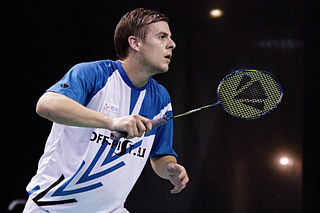 Hans-Kristian Solberg Vittinghus is a Danish badminton player. He joined the Denmark winning team at the 2016 Thomas Cup in Kunshan, China. 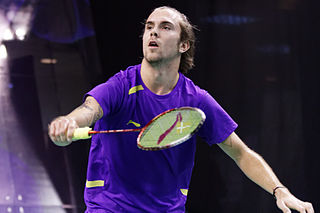 Jan Østergaard Jørgensen is a retired badminton player from Denmark who played for SIF (Skovshoved) in the Denmark badminton league. He won the men's singles title at the 2014 European Championships, and the bronze medalist at the 2015 World Championships. He joined the Denmark winning team at the 2016 Thomas Cup in Kunshan, China. 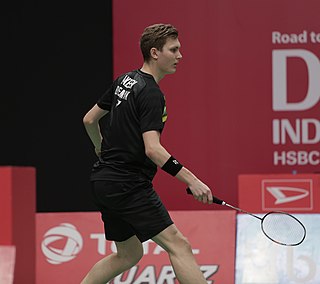 Viktor Axelsen is a Danish badminton player. He was the 2017 World Champion and the bronze medalist at the 2016 Summer Olympics. He won the 2010 World Junior Championships, beating Korea's Kang Ji-wook in the final to become the first ever European player to hold the title. Axelsen was crowned European men's singles champion in 2016 and 2018. He is widely considered as one of the best badminton players in the world.

Porntip Buranaprasertsuk is a badminton player from Thailand. Buranaprasertsuk won her first Superseries title in 2011 India Open on 1 May 2011, becoming the first Thai to win a women's singles title in the Superseries tournament. She competed at the 2010, 2014 Asian Games, also in four consecutive Southeast Asian Games, and was part of the team that won the women's team gold medals in 2011 and 2015 Southeast Asian Games.

Tontowi Ahmad is a retired Indonesian badminton player. He plays for PB. Djarum, a badminton club in Kudus, Central Java and joined the club in 2005. Tontowi Ahmad rose to prominence in the world badminton in 2010 when he paired with the established mixed doubles star Liliyana Natsir. With Natsir he won the 2016 Olympic gold medal in the mixed doubles category.

Tanongsak Saensomboonsuk is a Thai badminton player. He won his first career Superseries Premier title by winning the Denmark Open on 23 October 2016, becoming the first Thai to win a men's singles title in a Superseries Premier tournament. He studies a bachelor in business administration at Siam University.

Chou Tien-chen is a badminton player from Taiwan. He became the first local shuttler in 17 years to win the men's singles title of the Chinese Taipei Open in 2016 since Indonesian-born Fung Permadi won it in 1999. He won his first BWF Super Series title at the 2014 French Open, beating Wang Zhengming of China 10–21, 25–23, 21–19 in the finals. He is the record holder of three consecutive Bitburger Open Grand Prix Gold titles from 2012 till 2014.

Minatsu Mitani is a retired Japanese badminton player who is a singles specialist from NTT East badminton club. She competed at the 2014 Asian Games.

Nozomi Okuhara is a Japanese badminton player and the former World's No. 1 in BWF rankings for the women's singles, well known for her speed, agility and endurance. She won a bronze at the 2016 Summer Olympics, and gold medal at the 2017 World Championships.

Praveen Jordan is an Indonesian badminton player who specialises in doubles. He is the reigning and two-time All England Open champion in mixed doubles, winning in 2016 with Debby Susanto and in 2020 with Melati Daeva Oktavianti. He has played for the badminton club PB Djarum since 2008.

Jonatan Christie, also known by his nickname "Jojo", is an Indonesian badminton player. He is from PB. Tangkas Specs, a badminton club from Jakarta, capital city of Indonesia and plays in men's singles discipline.

Zheng Siwei is a Chinese badminton player specializing in doubles. Zheng is two times World Champion and Asian games gold medalists in the mixed doubles with his current partner Huang Yaqiong. He also helped the national team clinched the 2018 Thomas and 2019 Sudirman Cup.

Chen Qingchen is a Chinese badminton player. In 2016, her coach was Li Yongbo. Her badminton partner is Jia Yifan, and for mixed doubles her partner was Zheng Siwei. She ended the 2016 BWF Season by winning the BWF Most Promising Player of the Year, also completed her success by winning doubles title at the 2016 BWF Superseries Finals in women's and mixed doubles respectively. In 2017, she was awarded as the BWF Best Female Player of the Year, after came to Dubai World Superseries Finals as the first seeded both in women's and mixed doubles, and also won the women's doubles gold and mixed doubles silver medals at the 2017 BWF World Championships in Glasgow, Scotland.

He Bingjiao is a Chinese badminton player. She began to receive intensive badminton training at the Suzhou Junior Sports School, when she was only 7 years old. Five years later, she was sent to study in Nanjing and for tougher training there. The junior already competed in the senior level, and made her first senior international debut at the 2013 Vietnam Open. In 2014 she competed at the Summer Youth Olympics, winning a gold medal in the girls' singles and a bronze in the mixed doubles event.

Apriyani Rahayu is an Indonesian badminton player specializing in doubles. She was the gold medalist in 2019 Southeast Asian Games, and two times bronze medalists at the World Championships in 2018 and 2019. Rahayu also won bronze medals at the 2018 Asian Games in the women's team and doubles with her current partner Greysia Polii.