It is a deciduous tree growing to 25 metres (82 ft) tall with a trunk up to 70 cm diameter. The bark is brown, smooth on young trees, becoming scaly to shaggy on old trees. The leaves are pinnate, 50–70 cm long and 30–40 cm broad, with 10–40 leaflets, the terminal leaflet usually absent (paripinnate) but sometimes present (imparipennate); the individual leaflets 9–15 cm long and 2.5–4 cm broad, with an entire or weakly serrated margin. The flowers are produced in summer in panicles 30–50 cm long at the end of a branch; each flower is small, 4–5 mm diameter, with five white or pale pink petals. The fruit is a capsule 2–3.5 cm long, containing several winged seeds. [4] [7] [8] [9]

The young leaves of T. sinensis(xiāngchūn) are extensively used as a vegetable in China; they have a floral, yet onion-like flavor, attributed to volatile organosulfur compounds. [10] Plants with red young leaves are considered of better flavour than those where the young leaves are green. [4] [11] [12]

In China and Southeast Asian countries such as Malaysia, the young leaves of Toona sinensis or commonly known as Chinese Mahogany is used to make Toona paste, which is used as a condiment to serve with plain rice porridge as breakfast and simple meals, or to enhance the flavour of a dish or soup. Common dishes made with Toona paste are Chinese Mahogany fried rice, Chinese Mahogany beancurd, and Chinese Mahogany mushroom soup.

The timber is hard and reddish; it is valuable, used for furniture making [4] [9] and for bodies of electric guitars. Being a "true mahogany" (mahogany other than Swietenia), it is one of the common replacements for Swietenia mahogany ("genuine mahogany") which is now commercially restricted from being sourced natively. [13]

Outside its native region T. sinensis is valued more as a large ornamental tree for its haggard aspect. [8] [14] It is by far the most cold-tolerant species in the Meliaceae and the only member of the family that can be cultivated successfully in northern Europe.

In Chinese literature, Toona sinensis is often used for a rather extreme metaphor, with a mature tree representing a father. This manifests itself occasionally when expressing best wishes to a friend's father and mother in a letter, where one can write "wishing your Toona sinensis and daylily are strong and happy" (simplified Chinese :椿萱并茂; traditional Chinese :椿萱並茂; pinyin :chūnxuānbìngmào), with Toona sinensis metaphorically referring to the father and daylily to the mother. 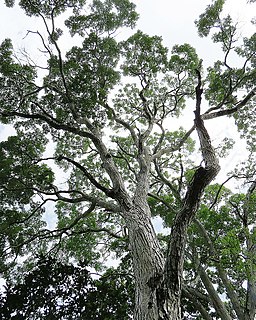 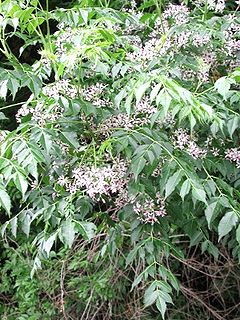 Momordica charantia is a tropical and subtropical vine of the family Cucurbitaceae, widely grown in Asia, Africa, and the Caribbean for its edible fruit. Its many varieties differ substantially in the shape and bitterness of the fruit.

Allium tuberosum is a species of plant native to the Chinese province of Shanxi, and cultivated and naturalized elsewhere in Asia and around the world. 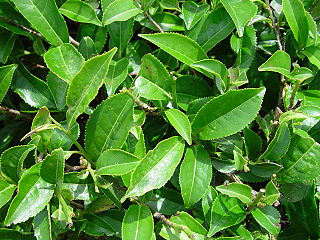 Camellia sinensis is a species of evergreen shrubs or small trees in the flowering plant family Theaceae whose leaves and leaf buds are used to produce tea. Common names include "tea plant", "tea shrub", and "tea tree". 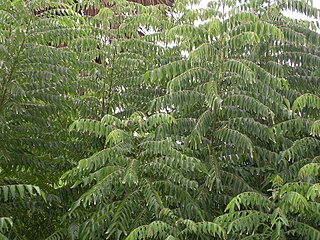 The curry tree is a tropical to sub-tropical tree in the family Rutaceae, and is native to Asia. The plant is also sometimes called sweet neem, though M. koenigii is in a different family to neem, Azadirachta indica, which is in the related family Meliaceae.

Toona, commonly known as redcedar, toon or toona, is a genus in the mahogany family, Meliaceae, native from Afghanistan south to India, and east to North Korea, Papua New Guinea and eastern Australia. In older texts, the genus was often incorporated within a wider circumscription of the related genus Cedrela, but that genus is now restricted to species from the Americas.

Khaya is a genus of five species of trees in the mahogany family Meliaceae. The timber of Khaya is called African mahogany, and is valued as a substitute to genuine mahogany.

Swietenia is a genus of trees in the chinaberry family, Meliaceae. It occurs natively in the Neotropics, from southern Florida, the Caribbean, Mexico and Central America south to Bolivia. The genus is named for Dutch-Austrian physician Gerard van Swieten (1700-1772). The wood of Swietenia trees is known as mahogany. 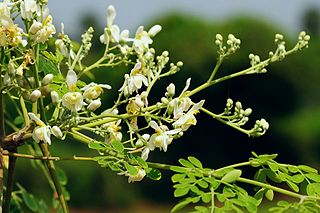 Synoum is a monotypic genus of evergreen tree in the family Meliaceae. It is endemic to Australia where it is found along the eastern sub-tropical to tropical coast, usually on the margins of rainforests, in Queensland and New South Wales. 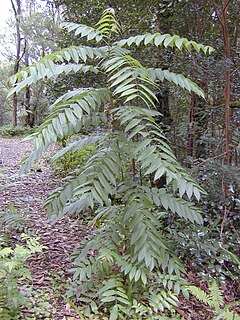 Toona ciliata is a forest tree in the mahogany family which grows throughout southern Asia from Afghanistan to Papua New Guinea and Australia.

Namul refers to either a variety of edible grass or leaves or seasoned herbal dishes made of them. Wild greens are called san-namul, and spring vegetables are called bom-namul. On the day of Daeboreum, the first full moon of the year, Koreans eat boreum-namul with five-grain rice. It is believed that boreum namuls eaten in winter help one to withstand the heat of the summer to come. 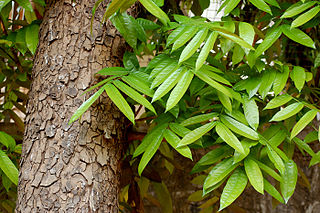 Swietenia macrophylla, commonly known as mahogany, Honduran mahogany, Honduras mahogany, big-leaf mahogany, or West Indian mahogany, is a species of plant in the Meliaceae family. It is one of three species that yields genuine mahogany timber (Swietenia), the others being Swietenia mahagoni and Swietenia humilis. It is native to South America, Mexico and Central America, but naturalized in the Philippines, Singapore, Malaysia and Hawaii, and cultivated in plantations and wind-breaks elsewhere.

Swietenia mahagoni, commonly known as American mahogany, Cuban mahogany, small-leaved mahogany, and West Indian mahogany, is a species of Swietenia native to South Florida in the United States and islands in the Caribbean including the Bahamas, Cuba, Jamaica, and Hispaniola. It is the species from which the original mahogany wood was produced. Mahogany is grown as plantation tree and sold in Timber markets in Kerala.

Perennial vegetables are vegetables that can live for more than two years. 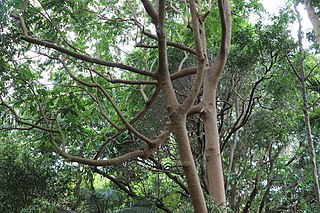 Dysoxylum mollissimum subsp. molle, the red bean or Miva mahogany, is a rainforest tree in the family Meliaceae. It occurs in tropical, sub-tropical and littoral rainforests in eastern Australia, as far southwards as north-eastern New South Wales. Also occurs in Malesia and the south-western Pacific Islands. In Australia it is distributed from the Bellinger River in New South Wales in the south, to the wet tropics of north-eastern Queensland. The specific epithet mollissimum is from the Latin, meaning "very soft", describing the soft hairy leaflets. A signposted red bean tree may be seen near the car park of Victoria Park Nature Reserve in north-eastern New South Wales. 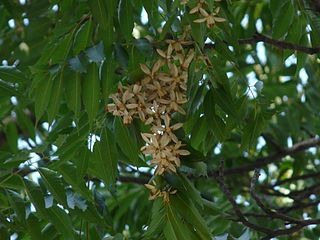 Chukrasia tabularis, the Indian mahogany, is a deciduous tree, which is a monotypic genus in the family Meliaceae. It is native to Bangladesh, Cambodia, China, India, Indonesia, Laos, Malaysia, Myanmar, Sri Lanka, Thailand, and Vietnam. Also introduced to many western countries such as Cameroon, Costa Rica, Nigeria, Puerto Rico, South Africa, and United States. The plant is widely used in Ayurveda as an important medicinal plant.

Toona sureni is a species of tree in the mahogany family. It is native to South Asia, Indochina, Malesia, China, and Papua New Guinea. It is commonly known as the suren toon, surian, limpaga, iron redwood or the red cedar. It is also known as the Indonesian mahogany or the Vietnamese mahogany. The species is a valuable timber tree.