The League of Ireland, together with the Football Association of Ireland, is one of the two main governing bodies responsible for organising association football in the Republic of Ireland. The term was originally used to refer to a single division league. However today the League of Ireland features five divisions – the Premier Division, the First Division, an U19 Division, an U17 Division, an U15 Division and starting March 2019 an U13 Division. The League of Ireland has always worked closely with the FAI and in 2006 the two bodies formally merged. All the divisions are currently sponsored by Airtricity and as a result the league is also known as the SSE Airtricity League. In 2007, it became one of the first leagues in Europe to introduce a salary cap. The league's most successful club is Shamrock Rovers who have won 17 titles. Together with Dundalk, Bohemians and Shelbourne they are one of four clubs in the league to feature a golden star above their badge in recognition of winning ten titles. Bohemians are the only club in the league to have played every season in the top division.

In sports, a reserve team is a team composed of players under contract to a specific team but who do not normally appear on the team's roster during matches. Reserve teams are usually composed of young players who need playing time in order to improve their skills, as well as members of the first team recovering from injury.

The Ulster Senior League was formed in 1986. The driving force behind the establishment of the league was Fr. Michael Sweeney, a pioneer of junior and intermediate association football in County Donegal. In addition to founding the USL, Sweeney had earlier been instrumental in both establishing the Donegal League and forming Fanad United. [1] [2] Fanad United were the inaugural USL champions in 1986–87 and they subsequently went on to become the league's most successful club, winning fourteen league titles and ten league cups. In more recent seasons, Cockhill Celtic have challenged Fanad United's dominance, winning their first title in 2010 and then four consecutive titles between 2013 and 2016. [3] [4] The winners of the Ulster Senior League have regularly been invited to participate in the League of Ireland Cup. In 1987–88 Fanad United were semi-finalists. Cockhill Celtic, Culdaff and Swilly Rovers have all represented the USL in the League of Ireland Cup. [2] [5] Fanad United have also won the FAI Intermediate Cup twice while Letterkenny Rovers were finalists in 2015–16. [6] [7]

County Donegal is a county of Ireland in the province of Ulster. It is named after the town of Donegal in the south of the county. Donegal County Council is the local council and Lifford the county town.

Fanad United Football Club is an Irish association football club based in Fanad, County Donegal. Their senior men's team currently plays in the Ulster Senior League. In 1986–87 they were both founding members and inaugural champions of the USL. They remain the USL's most successful club, having won fourteen titles. They also field teams in both the Donegal Youth League and the Donegal Women's League. They have previously fielded teams in both the A Championship and the League of Ireland U19 Division. They have also played in the FAI Cup, the League of Ireland Cup and the FAI Intermediate Cup. They have won the latter competition on two occasions, in 1987–88 and 1994–95. 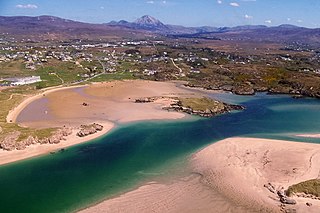 Gweedore is an Irish-speaking district and parish located on the Atlantic coast of County Donegal in the west of Ulster in the north-west of Ireland. Gweedore stretches some 26 kilometres (16 mi) from Glasserchoo in the north to Crolly in the south and around 14 kilometres (9 mi) from Dunlewey in the east to Magheraclogher in the west, and is one of Europe's most densely populated rural areas. It is the largest Irish-speaking parish in Ireland with a population of around 4,065, and is also the home of the northwest regional studios of the Irish-language radio service RTÉ Raidió na Gaeltachta, as well as an external campus of National University of Ireland, Galway. Gweedore includes the villages Bunbeg, Derrybeg, Dunlewey, Crolly and Brinalack, and sits in the shade of County Donegal's highest peak, Errigal.

The Donegal News is a twice-weekly local newspaper in the northwest of the island of Ireland, first published in 1902. Originally covering Derry, Northern Ireland, it moved across the border to Letterkenny, County Donegal, at the beginning of World War II and took on more of a Donegal focus. It is owned by the North West of Ireland Printing and Publishing Company, which was established in 1901 by the Lynch family, who also own several other papers in the region including the Ulster Herald, Fermanagh Herald, Strabane Chronicle, Tyrone Herald, and Gaelic Life. Its two editions had a circulation of 15,467 for the first half of 2010, with the Friday edition accounting for most of the figure. Its main competitors are the Donegal Democrat and Derry Journal. The paper, despite a 'rebranding' several years ago, continues to be known, for short, locally across the northern half of County Donegal as The Derry People.

The Munster Senior League is an association football league organized by the Munster Football Association. It currently organizes seven divisions as well as various cup competitions. It's Senior Division is a third level division in the Republic of Ireland football league system. Munster Senior League teams also compete in the Munster Senior Cup, the FAI Cup, the FAI Intermediate Cup and the FAI Junior Cup. In recent seasons the winners of the Senior Division have qualified to play in the League of Ireland Cup. Despite using the Munster name in its title, the vast majority of its member clubs are based in County Cork. However, in the past it has included clubs from County Limerick, County Waterford, County Kerry and County Tipperary.

The Connacht Football Association is the governing body for association football in the Irish province of Connacht. It is affiliated to the Football Association of Ireland and is currently responsible for organizing the Connacht Junior Cup and four junior leagues – the Galway & District League, the Mayo Association Football League, the Roscommon and District Football League and the Sligo/Leitrim & District League as well as numerous other leagues and cup competitions for junior teams. In the past it has also been responsible for organizing the Connacht Senior Cup and the Connacht Senior League. However both of these competitions are currently inactive. 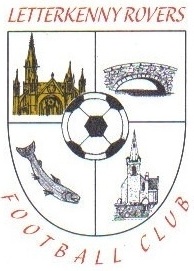 Letterkenny Rovers Football Club is an association football club from Ireland, currently competing in the Ulster Senior League. The club is based in Letterkenny and the team play their home games at Leckview Park.

The 2011-12 FAI Umbro Intermediate Cup was the 85th season of the tournament's existence. 94 clubs competed to win the title, and it was Avondale United who were the victors after they beat Cherry Orchard 2-1 for the second successive season in the final after extra time in Tallaght Stadium to gain their fifth Intermediate Cup title. The 16 teams that reached the fourth round qualified for the 2012 FAI Cup.

The 2012–13 Umbro FAI Intermediate Cup was the 86th season of the tournament's existence. 94 clubs competed to win the title. Avondale United are the defending champions after they beat Cherry Orchard 2-1 for the second successive season in the final after extra time in Tallaght Stadium to gain their fifth Intermediate Cup title. The 16 teams that reach the fourth round will qualify for the 2013 FAI Cup.

Nora Stapleton is a former Ireland women's rugby union international. Stapleton represented Ireland at the 2010, 2014 and 2017 Women's Rugby World Cups. She was also a member of the Ireland teams that won the 2013 and 2015 Women's Six Nations Championships. Stapleton was a member of the first Ireland teams to defeat both England and New Zealand. Stapleton has also played two other football codes at a senior level. As a women's association football player, she played for UCD in FAI Women's Cup finals and UEFA Women's Cup campaigns. She has also played senior Ladies' Gaelic football for Donegal.

Distillery Football Club was an Irish association football club originally based on Distillery Road in Drumcondra, Dublin. The club was active during the 1930s and 1940s, fielding teams in both the Leinster Senior League and the Athletic Union League. They also competed in the FAI Cup, the FAI Intermediate Cup, the FAI Junior Cup and the Leinster Senior Cup, winning the three latter trophies. Despite their successes at intermediate and junior level, unlike their contemporaries Sligo Rovers and St Patrick's Athletic, Distillery never joined the League of Ireland.

Pobalscoil Chloich Cheannfhaola(PCC), also known as PCC Falcarragh, is a voluntary/state-funded, coeducational, inter-denominational secondary school in Falcarragh, Co. Donegal, Ireland. Located north of the town centre of Falcarragh, its catchment area includes the districts of Cloughaneely, Dunfanaghy and Creeslough, although they have also traditionally attracted some students from Gweedore and The Rosses.

Charles McGeever is an Irish footballer from County Donegal. He played association football as a defender for Fanad United and in the League of Ireland for Sligo Rovers and Finn Harps. He played Gaelic football in midfield for Donegal, for which he also captained. He has had success while managing Finn Harps, as well as the Clonmel Commercials GAA club and the Tipperary county team.

The 2019 League of Ireland Cup, also known for sponsorship reasons as the 2019 EA Sports Cup, is the 46th season of the League of Ireland's secondary knockout competition. The EA Sports Cup features teams from the SSE Airtricity League Premier and First Divisions, as well as some intermediate level teams. It began on 4 March 2019.