From 1896–97 until 1964–65 the league was the de facto second level league in what is now the Republic of Ireland. Initially the Irish Football League was the top level. Then for one season, 1920–21, the Leinster Senior League was briefly the top level league. However this status was short lived and ended with the establishment of the League of Ireland in 1921–22. The Leinster Senior League remained a second level league until 1964–65 when it was effectively replaced by the League of Ireland B Division. With the establishment of the A Championship in 2008 it became a fourth level league. However, since the demise of the A Championship in 2011, it has reverted to third level status.

Within a few seasons of the Leinster Football Association been formed in 1892, the Leinster Senior League was established. Ciarán Priestley highlights a printed notice in the September 4, 1894 edition of The Irish Times . Under the headline "Leinster Football League" there is a report of "a general meeting of the league... held the other evening at 27 D'Olier Street". Priestley also lists Bohemians, Britannia, Dublin University, Leinster Nomads, Phoenix and Montpelier as participants in the first season. The Leinster Senior League website states it was established in 1896. [4] However other sources suggest the league started a little later and was first played for in 1897–98 and that an unidentified British Army regimental team where the inaugural winners while Shelbourne were runners up. See
Note 1 [5] [6]

Up until the 1920s the league was dominated by Bohemians and Shelbourne. These two clubs still remain the league's two most successful teams based on titles they won in this era. Even when Bohemians and Shelbourne joined the Irish Football League in 1902 and 1904 respectively, their reserve teams continued to win titles regularly. Initially only St James's Gate and British Army regimental teams challenged the Bohemians/Shelbourne duopoly. During the First World War the Irish Football League was suspended and the senior teams of both Bohemians and Shelbourne rejoined the Leinster Senior League. Meanwhile, their northern counterparts competed in the Belfast & District League. The 1919–20 saw a return to an all-Ireland league. However further disruption caused by the Irish War of Independence meant this was short lived and at the end of this season Bohemians and Shelbourne withdrew from the Irish Football League permanently. They subsequently rejoined the Leinster Senior League and for the 1920–21 season. The league now briefly became the top level league in what is now the Republic of Ireland. [7] 1920–21 also saw Shelbourne United emerge as champions, becoming only the fourth civilian team to win the title.

Shelbourne United Football Club was an Irish association football club based in Dublin. They are often confused with the similarly named current League of Ireland team Shelbourne. Both teams had their origins in the same Ringsend suburb and both teams played in the Leinster Senior League and the League of Ireland during the 1920s. However they were completely different teams. 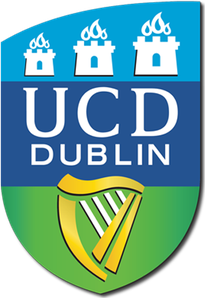 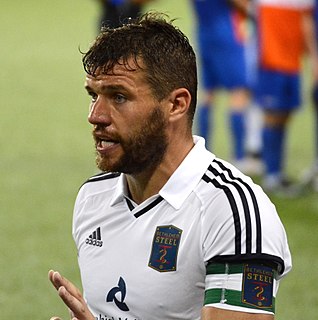 Patrick Kavanagh is an Irish footballer who plays as a winger for League of Ireland Premier Division club Bohemians.

Dolphin Football Club was an Irish association football club, originally based in the Dublin suburb of Dolphin's Barn. They played in the League of Ireland between 1930–31 and 1936–37. In 1934–35 they were League of Ireland champions. After St James's Gate, Shamrock Rovers, Bohemians, Shelbourne and Dundalk, Dolphin became the sixth club to win the League of Ireland title. In 1931–32 and 1932–33 Dolphin played in two successive FAI Cup finals, losing both games to Shamrock Rovers. Between 1930 and 1931 and 1932–33 Dolphin also played in three successive Leinster Senior Cup finals, winning the cup in 1931–32.

David Martin Campbell is an Irish football coach and former player. He is opposition analyst and head of recruitment at Sligo Rovers.

Christopher Joseph Fagan, known as Chris or Christy Fagan, is a retired Irish footballer who played as a forward. He last played for St Patrick's Athletic in the League of Ireland Premier Division.

There are many derbies in the League of Ireland, and despite the fact that historically more teams compete in the First Division, the majority are played in the Premier Division, the top flight of Irish football. 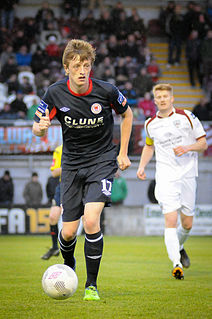 Christopher Stephen Forrester is an Irish professional footballer who plays as a midfielder for St Patrick's Athletic in the League of Ireland Premier Division. He has also previously played for Bohemians, Peterborough United, Aberdeen and the Republic of Ireland under-21's. In March 2016 he was called up to the Republic of Ireland senior squad but has yet to be capped.

The 2013 season was St. Patrick's Athletic F.C.'s 84th year in existence and their 62nd consecutive season in the League of Ireland. It was the second year that Liam Buckley was the team's manager, following replacing Pete Mahon in December 2011. St Pat's finished the season as the 2013 League of Ireland Premier Division champions. They were also Leinster Senior Cup runners up. They also competed in the UEFA Europa League, the FAI Cup, the Setanta Cup and the League of Ireland Cup.

The 2012 season was Dundalk's fourth successive season in the League of Ireland Premier Division following promotion in 2008. All together, it was the club's 86th season in League of Ireland football. The club was managed by Sean McCaffrey, who was in his first season in charge. The club also competed in the FAI Cup, League of Ireland Cup and the Leinster Senior Cup. Dundalk finished the 33-round season in 11th position, requiring them to play a promotion/relegation play-off against Waterford United of the First Division; a tie which they won on aggregate, thus retaining their place in the Premier Division for the 2013 season. Results against Monaghan United F.C. were expunged, after they withdrew from the League mid-season.

The 2014 FAI Senior Challenge Cup, also known as the 2014 FAI Ford Senior Cup, was the 94th season of the national football competition of the Republic of Ireland. The winners of the competition earned a spot in the first qualifying round of the 2015–16 UEFA Europa League.

Dundalk entered the 1987–88 season as the League Cup holders from 1986–87, having won that competition and finished as runners-up in both league and FAI Cup. 1987–88 was Turlough O'Connor's third season as manager, and was Dundalk's 62nd consecutive season in the top tier of Irish football.

Dundalk entered the 1966–67 season on the back of a disappointing eighth-place finish in the League and a sixth-place finish in the Shield the previous season. 1966–67 was Alan Fox's first season as player-coach, having been appointed by the club's new board of directors in August. It was Dundalk's 41st consecutive season in the top tier of Irish football.

Dundalk entered the 1932–33 season on the back of a fourth-place finish in the League and a fifth-place finish in the Shield the previous season. 1932–33 was manager Steve Wright's third season at the club, and was Dundalk's 7th consecutive season in the top tier of Irish football. Home matches were played at the Dundalk Athletic Grounds.

Dundalk G.N.R. made their debut in the Free State League, the top tier of Irish football, in 1926–27. They had played the previous four seasons in the Leinster Senior League. The team was managed by Joe McCleery, previously of Belfast Celtic F.C., who used his connections to Northern Irish football to ensure a supply of players for the season ahead. Home matches were played at the Dundalk Athletic Grounds, but on weekends when the Athletic Grounds were unavailable, matches would usually move to the Carroll's Recreation Ground.