Vertical Interval Timecode (VITC, pronounced "vitsee") is a form of SMPTE timecode encoded on one scan line in a video signal. These lines are typically inserted into the vertical blanking interval of the video signal.

With one exception, VITC contains the same payload as SMPTE linear timecode (LTC), embedded in a new frame structure with extra synchronization bits and an error-detection checksum. The exception is that VITC is encoded twice per interlaced video frame, once in each field, and one additional bit (the "field flag") is used to distinguish the two fields.

Linear Timecode (LTC) is an encoding of SMPTE timecode data in an audio signal, as defined in SMPTE 12M specification. The audio signal is commonly recorded on a VTR track or other storage media. The bits are encoded using the biphase mark code : a 0 bit has a single transition at the start of the bit period. A 1 bit has two transitions, at the beginning and middle of the period. This encoding is self-clocking. Each frame is terminated by a 'sync word' which has a special predefined sync relationship with any video or film content.

Interlaced video is a technique for doubling the perceived frame rate of a video display without consuming extra bandwidth. The interlaced signal contains two fields of a video frame captured at two different times. This enhances motion perception to the viewer, and reduces flicker by taking advantage of the phi phenomenon.

A video frame may contain more than one VITC code if necessary, recorded on different lines. This is often used in production, where different entities may want to encode different sets of time-code metadata on the same tape.

As a practical matter, VITC can be more 'frame-accurate' than LTC, particularly at very slow tape speeds on analog formats. LTC readers can lose track of code at slow jog speeds whereas VITC can be read frame-by-frame if need be. Conversely, at high speeds (FF/rew.), the VITC is often unreadable due to image distortions, so the LTC is often used instead. Some VCRs have an auto selection between the two formats to provide the highest accuracy.

VITC is 90 bits long: 32 bits of time code, 32 bits of user data, 18 synchronization bits, and 8 bits of checksum. It is transmitted using non-return-to-zero encoding at a bit rate of 115 times the line rate. (The unused 25 bit times are to leave room for the horizontal blanking interval.)

In telecommunication, a non-return-to-zero (NRZ) line code is a binary code in which ones are represented by one significant condition, usually a positive voltage, while zeros are represented by some other significant condition, usually a negative voltage, with no other neutral or rest condition. The pulses in NRZ have more energy than a return-to-zero (RZ) code, which also has an additional rest state beside the conditions for ones and zeros. NRZ is not inherently a self-clocking signal, so some additional synchronization technique must be used for avoiding bit slips; examples of such techniques are a run-length-limited constraint and a parallel synchronization signal.

Horizontal blanking interval refers to a part of the process of displaying images on a computer monitor or television screen via raster scanning. CRT screens display images by moving beams of electrons very quickly across the screen. Once the beam of the monitor has reached the edge of the screen, the beam is switched off, and the deflection circuit voltages are returned to the values they had for the other edge of the screen; this would have the effect of retracing the screen in the opposite direction, so the beam is turned off during this time. This part of the line display process is the Horizontal Blank.

In video engineering, color framing refers to the color frame sequence of fields in a composite video signal through which the video frame timing and chrominance subcarrier signal timing—in particular, that of the color burst -- cycle through all possible phase relationships.

SECAM, also written SÉCAM, is an analogue color television system first used in France. It was one of three major colour television standards, the others being the European PAL and North American NTSC.

Preserving the color framing sequence of video across edits and between channels in video effects was an important issue in early analog composite videotape editing systems, as cuts between different color sequences would cause jumps in subcarrier phase, and mixing two signals of different field dominance would result in color artifacts on the part of the signal that was not in sync with the output color frame sequence. 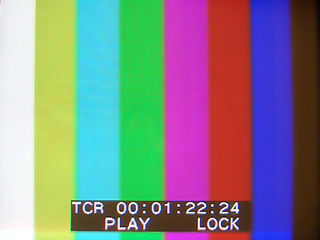 Burnt-in timecode is a human-readable on-screen version of the timecode information for a piece of material superimposed on a video image. BITC is sometimes used in conjunction with "real" machine-readable timecode, but more often used in copies of original material on to a non-broadcast format such as VHS, so that the VHS copies can be traced back to their master tape and the original time codes easily located.

Control track longitudinal, or CTL, timecode, developed by JVC in the early 1990s, is a unique technique for embedding, or striping, reference SMPTE timecode onto a videotape.

MIDI time code (MTC) embeds the same timing information as standard SMPTE timecode as a series of small 'quarter-frame' MIDI messages. There is no provision for the user bits in the standard MIDI time code messages, and SysEx messages are used to carry this information instead. The quarter-frame messages are transmitted in a sequence of eight messages, thus a complete timecode value is specified every two frames. If the MIDI data stream is running close to capacity, the MTC data may arrive a little behind schedule which has the effect of introducing a small amount of jitter. In order to avoid this it is ideal to use a completely separate MIDI port for MTC data. Larger full-frame messages, which encapsulate a frame worth of timecode in a single message, are used to locate to a time while timecode is not running.

Standard-definition television is a television system which uses a resolution that is not considered to be either high or enhanced definition. The two common SDTV signal types are 576i, with 576 interlaced lines of resolution, derived from the European-developed PAL and SECAM systems; 480i based on the American NTSC system. SDTV and high-definition television (HDTV) are the two categories of display formats for digital television (DTV) transmissions.

Compact Disc Digital Audio, also known as Audio CD, is the standard format for audio compact discs. The standard is defined in the Red Book, one of a series of "Rainbow Books" that contain the technical specifications for all CD formats.

A timecode is a sequence of numeric codes generated at regular intervals by a timing synchronization system. Timecode is used in video production, show control and other application which require temporal coordination or logging of recording or actions.

Telecine is the process of transferring motion picture film into video and is performed in a color suite. The term is also used to refer to the equipment used in the post-production process. Telecine enables a motion picture, captured originally on film stock, to be viewed with standard video equipment, such as television sets, video cassette recorders (VCR), DVD, Blu-ray Disc or computers. Initially, this allowed television broadcasters to produce programmes using film, usually 16mm stock, but transmit them in the same format, and quality, as other forms of television production. Furthermore, telecine allows film producers, television producers and film distributors working in the film industry to release their products on video and allows producers to use video production equipment to complete their filmmaking projects. Within the film industry, it is also referred to as a TK, because TC is already used to designate timecode. 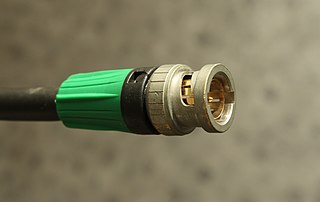 SMPTE 292 is a digital video transmission standard published by the Society of Motion Picture and Television Engineers (SMPTE) which expands upon SMPTE 259 and SMPTE 344 allowing for bit-rates of 1.485 Gbit/s, and 1.485/1.001 Gbit/s. These bit-rates are sufficient for and often used to transfer uncompressed high-definition video.

Ancillary data, in the context of television systems, refers to a means which by non-video information may be embedded within the serial digital interface. Ancillary data is standardized by SMPTE as SMPTE 291M: Ancillary Data Packet and Space Formatting.

The Rewriteable Consumer Timecode is a nearly frame accurate timecode method developed by Sony for 8mm and Hi8 analog tape formats. The RC timecode is written by the video camera directly to analog tape tracks and records the hour, minute, second and frame for each frame of video recorded to tape. Officially, RCTC is accurate to within ±2 to 5 frames. The RC timecode information is written in a separate area of the track so as to not disturb the audio or video information recorded on the tape. The RC timecode was used in conjunction with the datacode to record date, time and frame information directly to the 8mm tape tracks. 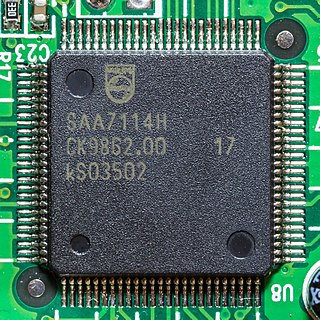