Digital multimedia broadcasting (DMB) is a digital radio transmission technology developed in South Korea [1] [2] [3] as part of the national IT project for sending multimedia such as TV, radio and datacasting to mobile devices such as mobile phones, laptops and GPS navigation systems. This technology, sometimes known as mobile TV, should not be confused with Digital Audio Broadcasting (DAB) which was developed as a research project for the European Union.

DMB was developed in South Korea as the next generation digital technology to replace FM radio, [4] but the technological foundations were laid by Prof. Dr. Gert Siegle and Dr. Hamed Amor at Bosch in Germany. [5] The world's first official mobile TV service started in South Korea in May 2005, although trials were available much earlier. It can operate via satellite (S-DMB) or terrestrial (T-DMB) transmission. DMB has also some similarities with its former competing mobile TV standard, DVB-H. [6]

T-DMB is made for terrestrial transmissions on band III (VHF) and L (UHF) frequencies. DMB is unavailable in the United States because those frequencies are allocated for television broadcasting (VHF channels 7 to 13) and military applications. USA is adopting ATSC-M/H for free broadcasts to mobiles, and Qualcomm's proprietary MediaFLO system was used there. In Japan, 1seg is the standard, using ISDB.

T-DMB uses MPEG-4 Part 10 (H.264) for the video and MPEG-4 Part 3 BSAC or HE-AAC v2 for the audio. The audio and video is encapsulated in an MPEG transport stream (MPEG-TS). The stream is forward error corrected by Reed Solomon encoding and the parity word is 16 bytes long. There is convolutional interleaving made on this stream, then the stream is broadcast in data stream mode on DAB. In order to diminish the channel effects such as fading and shadowing, the DMB modem uses OFDM-DQPSK modulation. A single-chip T-DMB receiver is also provided by an MPEG transport stream demultiplexer. DMB has several applicable devices such as mobile phone, portable TV, PDA and telematics devices for automobiles.

Currently, DMB is being put into use in a number of countries, although mainly used in South Korea. Also see list of Countries using DAB/DMB.

S-DMB service in South Korea is provided on a subscription basis through TU Media and is accessible throughout the country. T-DMB service is provided free of charge, but access is limited to selected regions.

Around one million receivers have been sold as of June 2006 [update] . 14 million DMB receivers were sold including T-DMB and S-DMB in South Korea, and 40% of the new cell phones have the capability to see DMB. [12]

Since the advent of smartphones DMBs have been made available on phones with receivers through smartphone applications, most of which come pre-installed in phones made and sold in Korea.

Some T-DMB trials are currently available or planned around Europe and other countries:

T-DMB works flawlessly in vehicles traveling up to 300 km/h.[ citation needed ] In tunnels or underground areas, both television and radio broadcast is still available, though DMB may skip occasionally. In South Korea, some long-distance buses adopted T-DMB instead of satellite TV such as Sky TV. It works quite well even though the resolution is 240p, lower than satellite. In comparison, satellite is usually 480p or higher.[ citation needed ] 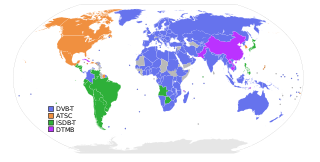 Digital audio broadcasting (DAB) is a digital radio standard for broadcasting digital audio radio services in many countries around the world, defined and promoted by the WorldDAB forum. The standard is dominant in Europe and is also used in parts of Africa, Asia and Australia; other worldwide terrestrial digital radio standards include HD Radio, ISDB-Tb, DRM, and the related DMB. 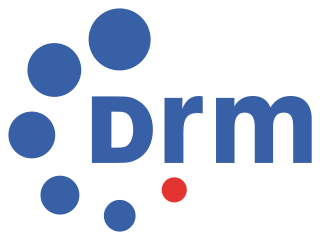 DVB-H is one of three prevalent mobile TV formats. It is a technical specification for bringing broadcast services to mobile handsets. DVB-H was formally adopted as ETSI standard EN 302 304 in November 2004. The DVB-H specification can be downloaded from the official DVB-H website. From March 2008, DVB-H is officially endorsed by the European Union as the "preferred technology for terrestrial mobile broadcasting". The major competitors of this technology are Qualcomm's MediaFLO system, the 3G cellular system based MBMS mobile-TV standard, and the ATSC-M/H format in the U.S. DVB-SH now and DVB-NGH in the future are possible enhancements to DVB-H, providing improved spectral efficiency and better modulation flexibility. DVB-H has been a commercial failure, and the service is no longer on-air. Ukraine was the last country with a nationwide broadcast in DVB-H.

Mobile television is television watched on a small handheld or mobile device. It includes service delivered via mobile phone networks, received free-to-air via terrestrial television stations, or via satellite broadcast. Regular broadcast standards or special mobile TV transmission formats can be used. Additional features include downloading TV programs and podcasts from the Internet and storing programming for later viewing.

IP over DVB implies that Internet Protocol datagrams are distributed using some digital television system, for example DVB-H, DVB-T, DVB-S, DVB-C or their successors like DVB-S2. This may take the form of IP over MPEG, where the datagrams are transferred over the MPEG transport stream, or the datagrams may be carried in the DVB baseband frames directly, as in GSE.

ETSI Satellite Digital Radio describes a standard of satellite digital radio. It is an activity of the European standardisation organisation ETSI. 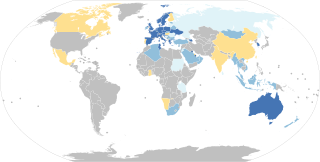