Zweikanalton ("two-channel sound") or A2 Stereo, [1] is an analog television sound transmission system used in Germany, Austria, Australia, Switzerland, Netherlands and other countries that use or used PAL-B or PAL-G. South Korea formerly utilised a modified version of Zweikanalton for its NTSC analogue television system until 31 December 2012. It relies on two separate FM carriers.

This offers a relatively high separation between the channels (compared to a subcarrier-based multiplexing system) and can thus be used for bilingual broadcasts as well as stereo. Unlike the competing NICAM standard, Zweikanalton is an analog system.

A 2nd FM sound carrier containing the right channel for stereo is transmitted at a frequency 242 kHz higher than the existing mono FM sound carrier, and channel mixing is used in the receiver to derive the left channel.

The second sound carrier also contains a 54.6875 kHz pilot tone to indicate whether the transmission is stereo or bilingual.

Zweikanalton can be adapted to any existing analogue television system, and modern PAL or SECAM television receivers generally include a sound detector IC that can decode both Zweikanalton and NICAM.

Zweikanalton can carry either a completely separate audio program, or can be used for stereo sound transmission. In the latter case, the first FM carrier carries (L+R) for compatibility, while the second carrier carries R (not L-R.) After combining the two channels, this method improves the signal-to-noise ratio by reducing the correlated noise between the channels.

Zweikanalton was developed by the Institut für Rundfunktechnik (IRT) in Munich during the 1970s, and was first introduced on the German national television channel ZDF on 13 September 1981. The German public broadcaster ARD subsequently introduced Zweikanalton on its Das Erste channel on 29 August 1985 in honour of the 1985 edition of the Internationale Funkausstellung Berlin (IFA). The (then)-West Germany thus became the first country in Europe to use multiplexed sound on its television channels.

Zweikanalton is known by a variety of names worldwide. Most commonly used names are Zweiton, German Stereo, A2 Stereo, West German Stereo and IGR Stereo. 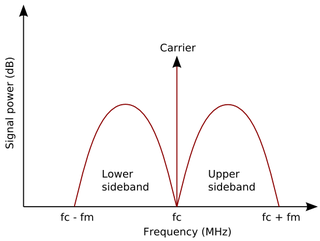 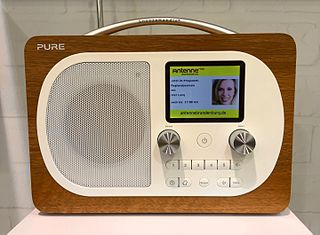 Multichannel Television Sound, better known as MTS, is the method of encoding three additional channels of audio into an analog NTSC-format audio carrier. It was developed by the Broadcast Television Systems Committee, an industry group, and sometimes known as BTSC as a result.

The International Telecommunication Union uses an internationally agreed system for classifying radio frequency signals. Each type of radio emission is classified according to its bandwidth, method of modulation, nature of the modulating signal, and type of information transmitted on the carrier signal. It is based on characteristics of the signal, not on the transmitter used.

576i is a standard-definition video mode originally used for terrestrial television in most countries of the world where the utility frequency for electric power distribution is 50 Hz. Because of its close association with the color encoding system, it is often referred to as simply PAL, PAL/SECAM or SECAM when compared to its 60 Hz NTSC-color-encoded counterpart, 480i. In digital applications it is usually referred to as "576i"; in analogue contexts it is often called "625 lines", and the aspect ratio is usually 4:3 in analogue transmission and 16:9 in digital transmission.

FM broadcasting is a method of radio broadcasting using frequency modulation (FM) technology. Invented in 1933 by American engineer Edwin Armstrong, wide-band FM is used worldwide to provide high-fidelity sound over broadcast radio. FM broadcasting is capable of better sound quality than DAB/+ radio, and AM broadcasting under normal listening conditions, so it is used for most music broadcasts. Theoretically wideband AM can offer equally good sound quality, provided the reception conditions are ideal. FM radio stations use the very high frequencies. The term "FM band" describes the frequency band in a given country which is dedicated to FM broadcasting. 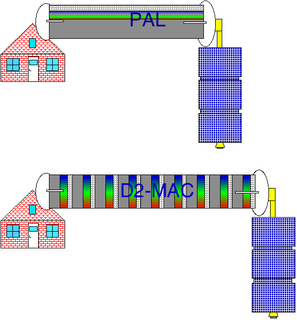 Multiplexed analogue components (MAC) was a satellite television transmission standard, originally proposed for use on a Europe-wide terrestrial HDTV system, although it was never used terrestrially.

MUSE, was an analog high-definition television standard, using dot-interlacing and digital video compression to deliver 1125-line high definition video signals to the home. Japan had the earliest working HDTV system, which was named Hi-Vision with design efforts going back to 1979. The country began broadcasting wideband analog HDTV signals in 1989 using 1035 active lines interlaced in the standard 2:1 ratio (1035i) with 1125 lines total. By the time of its commercial launch in 1991, digital HDTV was already under development in the United States. Hi-Vision continued broadcasting in analog until 2007.

EIAJ MTS is a multichannel television sound standard created by the EIAJ.

CCIR System I is an analog broadcast television system. It was first used in the Republic of Ireland starting in 1962 as the 625-line broadcasting standard to be used on VHF Band I and Band III, sharing Band III with 405-line System A signals radiated in the north of the country. The UK started its own 625-line television service in 1964 also using System I, but on UHF only – the UK has never used VHF for 625-line television except for some cable relay distribution systems.