Zirconium(IV) silicide is an inorganic chemical compound with the chemical formula ZrSi2, consisting of zirconium and silicon atoms. 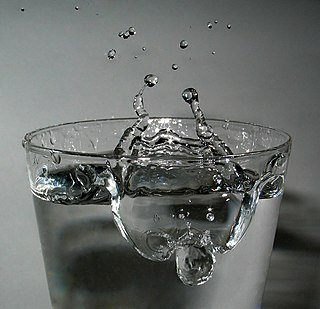 Hafnium is a chemical element with symbol Hf and atomic number 72. A lustrous, silvery gray, tetravalent transition metal, hafnium chemically resembles zirconium and is found in many zirconium minerals. Its existence was predicted by Dmitri Mendeleev in 1869, though it was not identified until 1923, by Coster and Hevesy, making it the last stable element to be discovered. Hafnium is named after Hafnia, the Latin name for Copenhagen, where it was discovered. 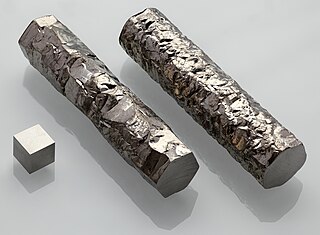 Zirconium is a chemical element with symbol Zr and atomic number 40. The name zirconium is taken from the name of the mineral zircon, the most important source of zirconium. It is a lustrous, grey-white, strong transition metal that closely resembles hafnium and, to a lesser extent, titanium. Zirconium is mainly used as a refractory and opacifier, although small amounts are used as an alloying agent for its strong resistance to corrosion. Zirconium forms a variety of inorganic and organometallic compounds such as zirconium dioxide and zirconocene dichloride, respectively. Five isotopes occur naturally, three of which are stable. Zirconium compounds have no known biological role. 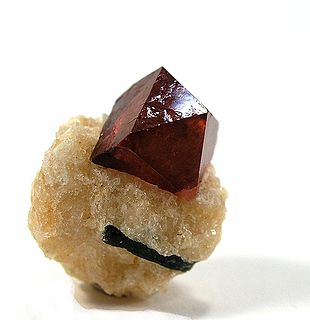 Zircon ( or ) is a mineral belonging to the group of nesosilicates. Its chemical name is zirconium silicate, and its corresponding chemical formula is ZrSiO4. A common empirical formula showing some of the range of substitution in zircon is (Zr1–y, REEy)(SiO4)1–x(OH)4x–y. Zircon forms in silicate melts with large proportions of high field strength incompatible elements. For example, hafnium is almost always present in quantities ranging from 1 to 4%. The crystal structure of zircon is tetragonal crystal system. The natural color of zircon varies between colorless, yellow-golden, red, brown, blue and green. Colorless specimens that show gem quality are a popular substitute for diamond and are also known as "Matura diamond". 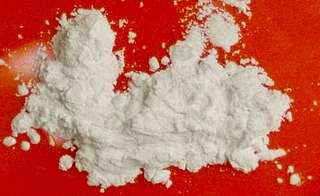 Zirconium dioxide, sometimes known as zirconia, is a white crystalline oxide of zirconium. Its most naturally occurring form, with a monoclinic crystalline structure, is the mineral baddeleyite. A dopant stabilized cubic structured zirconia, cubic zirconia, is synthesized in various colours for use as a gemstone and a diamond simulant. 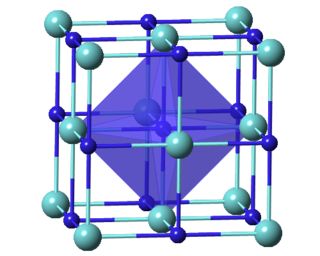 Zirconium(II) hydride, ZrH2 is a molecular chemical compound which has been prepared by laser ablation and isolated at low temperature.

Zirconium(IV) bromide is the inorganic compound with the formula ZrBr4. This colourless solid is the principal precursor to other Zr–Br compounds. 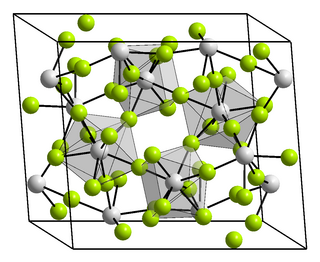 Zirconium(IV) fluoride (ZrF4) is an inorganic chemical compound. It is a component of ZBLAN fluoride glass. It is insoluble in water. It is the main component of fluorozirconate glasses.

Zirconium(IV) iodide is the chemical compound with the formula ZrI4. It is the most readily available iodide of zirconium. It is an orange-coloured solid that degrades in the presence of water.The compound was once prominent as an intermediate in the purification of zirconium metal.

Zirconium (IV) hydroxide, often called hydrous zirconia is an ill-defined material or family of materials variously described as and . All are white solids with low solubility in water. These materials are widely employed in the preparation of solid acid catalysts. 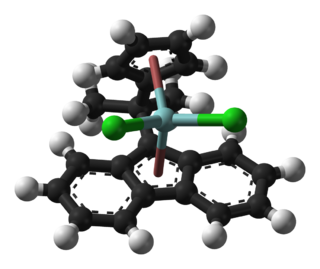 Zirconium perchlorate is a molecular substance containing zirconium and perchlorate groups with formula Zr(ClO4)4. Zr(ClO4)4 is a volatile crystalline product. It can be formed by reacting zirconium tetrachloride with dry perchloric acid at liquid nitrogen temperatures. Zr(ClO4)4 sublimes slowly in a vacuum at 70°C showing that the molecule is covalently bound rather than being ionic. The reaction also forms some zirconyl perchlorate (or zirconium oxyperchlorate) ZrO(ClO4)2 as even apparently pure perchloric acid is in equilibrium with dichlorine heptoxide, hydronium ions and perchlorate ions. This side product can be minimised by adding more dichlorine heptoxide or doing the reaction as cold as possible.

Zirconium nitrate is a volatile anhydrous transition metal nitrate of zirconium with formula Zr(NO3)4. It has alternate names of zirconium tetranitrate, or zirconium(IV) nitrate.