The Beijing Convention (formally, the Convention on the Suppression of Unlawful Acts Relating to International Civil Aviation) is a 2010 treaty by which state parties agree to criminalise certain terrorist actions against civil aviation.

The Convention was concluded on 10 September 2010 at the Diplomatic Conference on Aviation Security in Beijing. (At the same conference, the Protocol Supplementary to the Convention for the Suppression of Unlawful Seizure of Aircraft was adopted.) Parties that ratify the Convention agree to criminalise using civil aircraft as a weapon and using dangerous materials to attack aircraft or other targets on the ground. The illegal transport of biological, chemical, and nuclear weapons is also criminalised under the Convention. 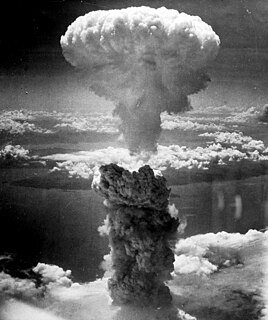 The negotiation of a new aviation security treaty that would address emerging threats to aviation was in part prompted by the September 11 attacks. At the conclusion of the conference, the U.S. delegate stated that "[o]n the eve of the anniversary of the 9/11 terrorist attacks, the United States can think of no more fitting and hopeful way to mark that occasion than with the adoption of these two new major counterterrorism instruments." [1] 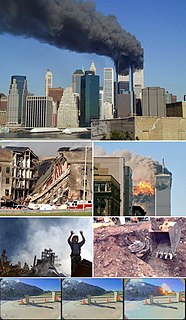 The treaty entered into force on 1 July 2018 following Turkey's accession thereto. It has been signed by 35 states and ratified or acceded to by 26 (as of September 2018). [2] 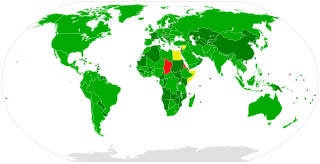 The Convention on the Prohibition of the Development, Production and Stockpiling of Bacteriological (Biological) and Toxin Weapons and on their Destruction was the first multilateral disarmament treaty banning the production of an entire category of weapons.

The Convention on the Prohibition of the Use, Stockpiling, Production and Transfer of Anti-Personnel Mines and on their Destruction, known informally as the Ottawa Treaty, the Anti-Personnel Mine Ban Convention, or often simply the Mine Ban Treaty, aims at eliminating anti-personnel landmines (AP-mines) around the world. To date, there are 164 state parties to the treaty. One state has signed but not ratified the treaty, while 32 UN states, including China, Russia, and the United States have not; making a total of 33 United Nations states not party. 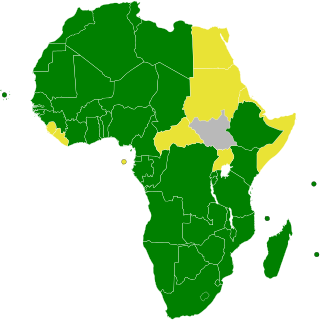 The African Nuclear Weapon Free Zone Treaty, also known as the Treaty of Pelindaba, establishes a Nuclear-Weapon-Free Zone in Africa. The treaty was signed in 1996 and came into effect with the 28th ratification on 15 July 2009.

The Nuclear Terrorism Convention is a 2005 United Nations treaty designed to criminalize acts of nuclear terrorism and to promote police and judicial cooperation to prevent, investigate and punish those acts. As of September 2018, the convention has 115 signatories and 114 state parties, including the nuclear powers China, France, India, Russia, the United Kingdom, and the United States. Most recently, Benin ratified the convention on 2 November 2017.

The Terrorist Financing Convention is a 1999 United Nations treaty designed to criminalize acts of financing acts of terrorism. The convention also seeks to promote police and judicial co-operation to prevent, investigate and punish the financing of such acts. As of October 2018, the treaty has been ratified by 188 states; in terms of universality, it is therefore one of the most successful anti-terrorism treaties in history.

The Agreement for the Suppression of the Circulation of Obscene Publications is a multilateral anti-pornography treaty that was initially negotiated and concluded in Paris in 1910. It was amended by a 1949 Protocol. As of 2013, the treaty has 57 state parties.

The Convention for the Suppression of Unlawful Acts against the Safety of Maritime Navigation (SUA) or Sua Act is a multilateral treaty by which states agree to prohibit and punish behaviour which may threaten the safety of maritime navigation.

The Protocol for the Suppression of Unlawful Acts against the Safety of Fixed Platforms Located on the Continental Shelf is a multilateral treaty by which states agree to prohibit and punish behaviour which may threaten the safety of offshore fixed platforms, including oil platforms.

The Council of Europe Convention on the Protection of Children against Sexual Exploitation and Sexual Abuse is a multilateral Council of Europe treaty whereby states agree to criminalise certain forms of sexual abuse against children. It is the first international treaty that addresses child sexual abuse that occurs within the home or family.

The Convention for the Suppression of the Circulation of and Traffic in Obscene Publications is a 1923 League of Nations anti-pornography treaty that was initially negotiated and concluded in Geneva. It was amended by a 1947 Protocol and as of 2013 has 56 state parties.