This is a list of airline holding companies, that either own more than one airline or are the parent company of a single airline.

To create the world's largest carrier, American Airlines and US Airways merged on 9 December 2013, with the frequent flier programs combined on 7 January 2014, [1] and the airline codeshare beginning February 2014 using the American flight number. [2]

Cargo airlines are airlines mainly dedicated to the transport of cargo by air. Some cargo airlines are divisions or subsidiaries of larger passenger airlines. In 2018, airline cargo traffic represented 262,333 million tonne-kilometres with a 49.3% load factor: 52.1% for dedicated cargo operations, and 47.9% within mixed operations. 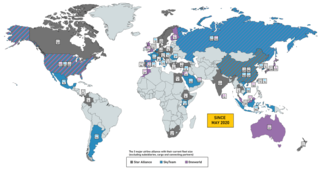 Synergy Group Corp. is a South American conglomerate created and owned by Germán Efromovich, an entrepreneur holding multiple citizenship of Brazil, Colombia and Poland. The group is headquartered in Rio de Janeiro, Brazil. It operates several airlines in South America, among which are Avianca Holdings, with a 66.66% stake, and is active in the exploration of oil and natural gas throughout the region. Additionally, it operates hydroelectric power plants, participates in the construction of telecommunications infrastructure, shipbuilding and technical inspections, radiochemistry, radiopharmaceuticals, agriculture and hospitality.

Aviapartner, whose origins date back to 1949 under the name of Herfurth Air Services to become 'Belgavia' in the late 1960s, is a Belgian company that provides aircraft ground handling services at 37 airports in Belgium, France, Germany, Italy, Spain and The Netherlands. Among the airports served are Amsterdam, Brussels, Milan, Düsseldorf, Rome, Nice, Toulouse and Málaga. 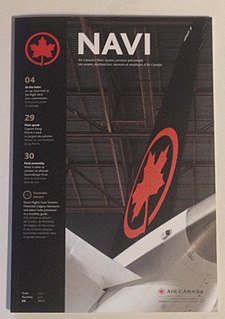 An inflight magazine is a free magazine distributed via the seats of an airplane by an airline company or in an airport lounge.

Avianca Ecuador S.A. is an airline based in Quito, Ecuador. It operates passenger and cargo flights within Ecuador, between the mainland and the Galápagos Islands, and between Ecuador and Colombia. It is one of the seven nationally branded airlines in the Avianca Holdings group of Latin American airlines.