An airport crash tender (known in some countries as an airport fire appliance) is a specialised fire engine designed for use in aircraft rescue and firefighting at aerodromes, airports, and military air bases.

Airport crash tenders are extremely powerful machines. They offer relatively good acceleration for their size and weight, are able to negotiate rough terrain outside the airport area, carry large capacities of water and fire fighting foam, are fitted with powerful high-capacity pumps and water/foam cannons, and are capable of delivering firefighting media over long distances. They can be mounted on 4x4, 6x6, or even 8x8 wheeled chassis. In order to decrease their turning radius, all four of the 8x8 wheeled unit's front wheels may be steerable.

Newer airport crash tenders also incorporate twin-agent nozzles/injection systems to inject a stream of Purple-K dry chemical into the AFFF firefighting foam stream, helping to extinguish the fire faster. [1] Some also have Halotron tanks with handlines for situations that require a clean agent to be utilized. These features give the airport crash tenders a capability to reach an aircraft rapidly, and rapidly put out large fires with jet fuel involved.

Some tenders have an elevated extended extinguishing arm, giving the possibility to raise a water/foam cannon to the height of approximately 10 to 20 meters, which can puncture through superficial structures of an aeroplane to fight a fire inside the fuselage. [2]

Some arms have a reinforced nozzle, called a snozzle, that, according to the United States National Transportation Safety Board is a "piercing nozzle on the fire truck that is used to penetrate an airplane's fuselage and dispense AFFF to extinguish fire inside the cabin or cargo area." [3]

The International Civil Aviation Organization (ICAO) has given standards and recommended practices on rescue fire fighting categories of civil aerodromes. [4] [5] [6] National aviation authorities may have given even further requirements on aerodrome rescue and fire services.

The rescue fire services are based on a critical aircraft based on a statistical analysis of movements (take-offs and landings) on the airport.[ incomprehensible ] The aerodrome category is based on the size of the largest aircraft which will operate at the aerodrome. In addition, the number of movements of the critical aircraft is calculated, and the category can be decreased by one if the number of movements is lower than the standard describes.[ incomprehensible ] For example, at an airport regularly handling Boeing 737 and Airbus A320 aircraft with a single Boeing 777 service per week, the airport fire service has to cater up to the ICAO category 7 of the 737 and A320; a single 777 movement per week does not justify a full ICAO category 9 fire service. There are also minimum category levels based on e.g. the number of seats in the critical aircraft. [7]

Depending on the airport category, the standards determine the minimum number of rescue fire-fighting vehicles. In addition, requirements are given on the water and foam capacities, discharge rates for foam solutions, and minimum dry chemical powder (complementary agent) amounts, reserve stocks of fire fighting agents, ability to operate on rough terrain, and acceleration of the air crash tenders. The end of each runway has to be achieved in a response time of two minutes, and any part of the movement area has to be achieved in a response time not exceeding three minutes.

Airport rescue and firefighting services operate many specialist vehicles to provide emergency cover at airports. They include: 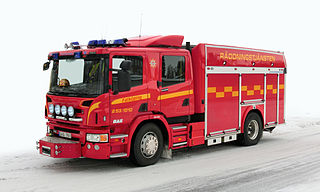 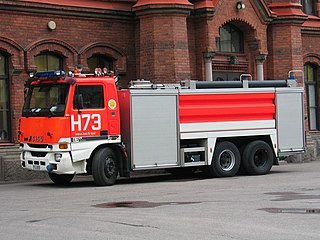 A water tender is a type of firefighting apparatus that specialises in the transport of water from a water source to a fire scene. Water tenders are capable of drafting water from a stream, lake or hydrant.

The Singapore Civil Defence Force is an emergency service in Singapore under the Ministry of Home Affairs that provides firefighting, technical rescue, and emergency medical services and coordinates national civil defence.

Aircraft rescue and firefighting (ARFF) is a type of firefighting that involves the emergency response, mitigation, evacuation, and rescue of passengers and crew of aircraft involved in aviation accidents and incidents.

The New Zealand Fire Service was New Zealand's main firefighting body from 1 April 1976 until 1 July 2017 – at which point it was dissolved and incorporated into the new Fire and Emergency New Zealand.

Firefighting foam is a foam used for fire suppression. Its role is to cool the fire and to coat the fuel, preventing its contact with oxygen, resulting in suppression of the combustion. Fire-fighting foam was invented by the Russian engineer and chemist Aleksandr Loran in 1902. 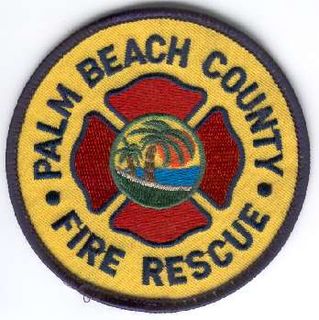 A compressed air foam system (CAFS) is used in firefighting to deliver fire retardant foam for the purpose of extinguishing a fire or protecting unburned areas.

Essex County Fire and Rescue Service (ECFRS) is the statutory fire and rescue service for the county of Essex in the east of England, and is one of the largest fire services in the country, covering an area of 1,338 square miles (3,470 km2) and a population of over 1.7 million people. 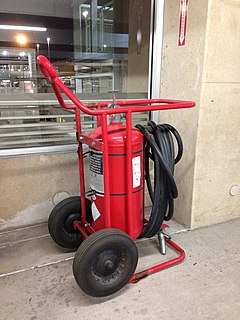 Firefighting is the act of extinguishing destructive fires. A firefighter fights these fires with the intent to prevent destruction of life, property and the environment. Firefighting is a highly technical profession, which requires years of training and education in order to become proficient. A fire can rapidly spread and endanger many lives; however, with modern firefighting techniques, catastrophe can usually be avoided. To help prevent fires from starting, a firefighter's duties include public education and conducting fire inspections. Because firefighters are often the first responders to victims in critical conditions, firefighters often also provide basic life support as emergency medical technicians or advanced life support as licensed paramedics. Firefighters make up one of the major emergency services, along with the emergency medical service, the police, and many others.

The provision of rescue and firefighting services (RFFS) at all airports and aerodromes in the United Kingdom is a requirement under British law and under international agreements set out by the International Civil Aviation Organization. 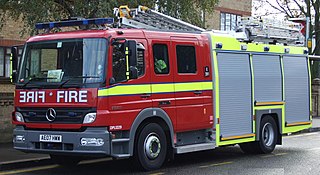 Fire services in the United Kingdom use a variety of fire appliances, which perform a wide range of general and specialised roles and fit into several distinct categories. Contemporary fire appliances carry a multitude of equipment and firefighting media to deal with different types of emergencies ranging from fires, rescues, vehicle extrication, floods, salvage, casualty and trauma care. 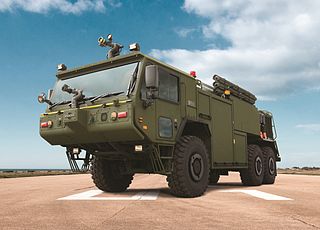 The Oshkosh P-19R is an Aircraft Rescue and Fire Fighting (ARFF) vehicle and it was selected by the U.S. Marines in 2013. The first delivery occurred in June 2017, Initial Operating Capability (IOC) followed in February 2018, and in service the P-19R serves as a first-response vehicle in aircraft fire emergencies at military bases and expeditionary airfields.

The M113A2 Firefighting Vehicle was a US Army prototype of a M113 armoured personnel carrier (APC) modified to carry a system for dispensing fire suppressant liquid to combat petrochemical fires encountered on the battlefield. Only one vehicle was built and the system did not go into production.