Last updated September 05, 2021
‹ The template Infobox organization is being considered for merging. ›

The Association of Asia Pacific Airlines (AAPA), formerly Orient Airlines Association, Inc., [1] is a trade association of major scheduled international airlines based in the Asia-Pacific region. Established in 1966 with headquarters in Makati, Philippines, the association has moved to its present headquarters in Menara Prestige, Kuala Lumpur, Malaysia. The primary purpose of the AAPA is to serve as a common forum for the articulation of members’ views on matters and issues of common interest, to foster close cooperation, and to bring about an atmosphere conducive to the stimulation of the travel and tourism industry.

The Association currently has sixteen member airlines from the Asia-Pacific region:

Cargo airlines are airlines mainly dedicated to the transport of cargo by air. Some cargo airlines are divisions or subsidiaries of larger passenger airlines. In 2018, airline cargo traffic represented 262,333 million tonne-kilometres with a 49.3% load factor: 52.1% for dedicated cargo operations, and 47.9% within mixed operations.

Indira Gandhi International Airport is an airport located in the city of Delhi, India that serves as the international aviation hub of the Indian capital of New Delhi as well as the rest of northern India. The airport, spread over an area of 5,106 acres (2,066 ha), is situated in Palam, 15 km (9.3 mi) south-west of the New Delhi Railway Station and 16 km (9.9 mi) from New Delhi city centre. Named after former Prime Minister of India Indira Gandhi, it is the busiest airport in India in terms of passenger traffic since 2009. It is also the busiest airport in the country in terms of cargo traffic, overtaking Mumbai during late 2015. As of now, it is the 17th busiest airport in the world and 6th busiest airport in Asia by passenger traffic handling nearly 70 million passengers. It is the world's busiest airport for Airbus A320 aircraft. The under construction expansion program will increase the airport's capacity to handle 100 million passengers by 2030.

Cathay Pacific Airways Ltd. (CPA), more widely known as Cathay Pacific, is the flag carrier of Hong Kong, with its head office and main hub located at Hong Kong International Airport. The airline's operations and subsidiaries have scheduled passenger and cargo services to more than 190 destinations in more than 60 countries worldwide including codeshares and joint ventures. Cathay Pacific operates a fleet consisting of Airbus A320, Airbus A321, Airbus A321neo, Airbus A330, Airbus A350, and Boeing 777 aircraft. Cathay Pacific Cargo operates two models of the Boeing 747. Defunct wholly owned subsidiary airline Cathay Dragon, which stopped operations, previously flew to 44 destinations in the Asia-Pacific region from its Hong Kong base. In 2010, Cathay Pacific and Cathay Pacific Cargo, together with Dragonair, carried nearly 27 million passengers and over 1.8 million tons of cargo and mail.

Malaysia Airlines Berhad (MAB), formerly known as Malaysian Airline System (MAS), branded as Malaysia Airlines, is the flag carrier airline of Malaysia and a member of the oneworld airline alliance. The company headquarters are located at Kuala Lumpur International Airport. In August 2014, the Malaysian government's sovereign wealth fund Khazanah Nasional—which then owned 69.37% of the airline—announced its intention to purchase remaining ownership from minority shareholders and de-list the airline from Malaysia's stock exchange, thereby renationalising the airline. It operates primarily from Kuala Lumpur International Airport and from secondary hubs in Kota Kinabalu and Kuching to destinations throughout Asia, Oceania, and Europe.

The freedoms of the air are a set of commercial aviation rights granting a country's airlines the privilege to enter and land in another country's airspace. They were formulated as a result of disagreements over the extent of aviation liberalisation in the Convention on International Civil Aviation of 1944, known as the Chicago Convention. The United States had called for a standardized set of separate air rights to be negotiated between states, but most other countries were concerned that the size of the U.S. airlines would dominate air travel if there were not strict rules. The freedoms of the air are the fundamental building blocks of the international commercial aviation route network. The use of the terms "freedom" and "right" confers entitlement to operate international air services only within the scope of the multilateral and bilateral treaties that allow them.

Etihad Airways is the second flag carrier of the United Arab Emirates. Its head office is in Khalifa City, Abu Dhabi, near Abu Dhabi International Airport. Etihad commenced operations in November 2003. It is the second-largest airline in the UAE after Emirates.

Hong Kong Airlines Limited is an airline based in Hong Kong, with its headquarters in the Tung Chung district and its main hub at Hong Kong International Airport. It was established in 2006 as a member of the HNA Group and flies to more than 30 regional and international destinations in Asia and Europe using both passenger and cargo aircraft. The company slogan is Where Hong Kong Begins and Fresh+very Hong Kong.

Air Astana is the flag carrier of Kazakhstan, based in Almaty. It operates scheduled, domestic and international services on 64 routes from its main hub, Almaty International Airport, and from its secondary hub, Nursultan Nazarbayev International Airport. It is a joint venture between Kazakhstan's sovereign wealth fund Samruk-Kazyna (51%), and BAE Systems PLC (49%). It was incorporated in October 2001 and started commercial flights on 15 May 2002.

Aviation in Singapore is a key component of the Singaporean economy in its quest to be a transport hub of the Asian region. Besides currently the sixth busiest airport and the fourth busiest air cargo hub in Asia, the Singaporean aviation industry is also a significant aerospace maintenance, repair and overhaul centre. 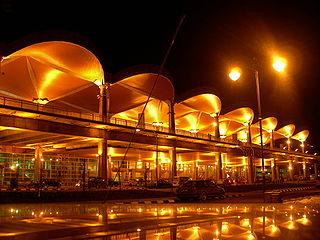 Kuching International Airport is an international airport serving the entire southwestern region of Sarawak, Malaysia. It is located 11 km (6.8 mi) south of Kuching city centre. The airport also colocated with the RMAF Kuching, home to the No. 7 Squadron RMAF.

Almaty International Airport, formerly Alma-Ata Airport, is a major international airport 15 km (9.3 mi) northeast of Almaty, the largest city and commercial capital of Kazakhstan. It is the busiest airport in that country, accounting for half of passenger traffic and 68% of cargo traffic.

Somon Air is a private airline in Tajikistan headquartered in Dushanbe and based at Dushanbe International Airport. 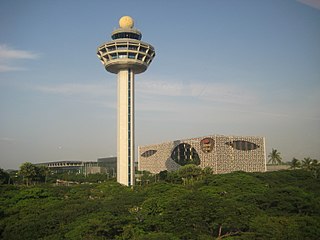 Singapore Changi Airport, commonly known as Changi Airport, is a major civilian airport that serves Singapore and one of the largest transportation hubs in Asia. As one of the world's busiest airports by international passenger and cargo traffic, it is currently rated the World's Best Airport by Skytrax, the first airport in the world to do so for eight consecutive years. It has also been rated as one of the world's cleanest airports and highly rated international transit airports.