In 1921, nearby Blair Mountain was the site of the West Virginia Mine Wars between thousands of rioting coal miners and federal troops which came to the aid of embattled local authorities. The federal troops prevailed and an unknown, but relatively small, number of people were killed in the fighting.

Also, during the Battle of Blair Mountain, a part of the West Virginia Mine Wars, federal troops used bombs against miners that attempting to reach the top. 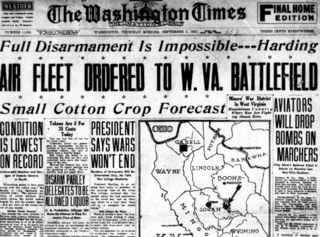 Since the mid-1990s, Blair has been quickly depopulated by the expansion of Arco Coal Company's surface mine on Blair Mountain just above the town. Arco has bought out many local residents and filled in part of the valley upon which Blair rests with blasted rock from the mountain. About two-thirds of the approximately two hundred homes that constituted Blair in the early 1990s have since been demolished.

In December 2005 a coalition of environmental groups filed a lawsuit to stop Arco from getting the necessary permits to create more valley fills. At the time of writing, this lawsuit was not resolved.

Pocahontas is a town in Tazewell County, Virginia, United States. It was named for Chief Powhatan's daughter, Pocahontas, who lived in the 17th-century Jamestown Settlement. She married John Rolfe, and they were among the ancestors of many of the First Families of Virginia. 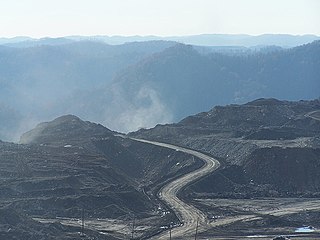 The Baldwin–Felts Detective Agency was a private detective agency in the United States from the early 1890's to 1937.

The Battle of Matewan was a shootout in the town of Matewan in Mingo County and the Pocahontas Coalfield mining district, in southern West Virginia. It occurred on May 19, 1920 between local coal miners and the Baldwin–Felts Detective Agency. 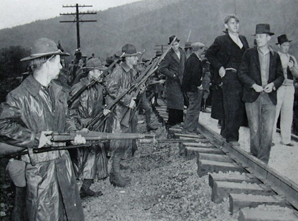 The Harlan County War, or Bloody Harlan, was a series of coal mining-related skirmishes, executions, bombings, and strikes that took place in Harlan County, Kentucky during the 1930s. The incidents involved coal miners and union organizers on one side, and coal firms and law enforcement officials on the other. The question at hand: the rights of Harlan County coal miners to organize their workplaces and better their wages and working conditions. It was a nearly decade-long conflict, lasting from 1931 to 1939. Before its conclusion, an indeterminate number of miners, deputies, and bosses would be killed, state and federal troops would occupy the county more than half a dozen times, two acclaimed folk singers would emerge, union membership would oscillate wildly, and workers in the nation's most anti-labor coal county would ultimately be represented by a union.

Denise Giardina is an American novelist. Her book Storming Heaven was a Discovery Selection of the Book-of-the-Month Club and received the 1987 W. D. Weatherford Award for the best published work about the Appalachian South. The Unquiet Earth received an American Book Award and the Lillian Smith Book Award for fiction. Her 1998 novel Saints and Villains was awarded the Boston Book Review fiction prize and was semifinalist for the International Dublin Literary Award.

The Paint Creek–Cabin Creek Strike, or the Paint Creek Mine War, was a confrontation between striking coal miners and coal operators in Kanawha County, West Virginia, centered on the area enclosed by two streams, Paint Creek and Cabin Creek.

The West Virginia coal wars (1912–21), also known as the mine wars, arose out of a dispute between coal companies and miners. The first workers strike, in West Virginia, was the Cabin Creek and Paint Creek strike of 1912-1913. With help from Mary "Mother Jones" Harris Jones, an important figure in unionizing the mine workers, the miners demanded better pay, better work conditions, the right to trade where they pleased, and recognition of the United Mine Workers (UMW). The mining companies, however, refused to meet the demands of the workers and instead hired Baldwin-Felts agents, equipped with high-powered rifles, to guard the mines, and act as strikebreakers. After the Agents arrived, the miners either moved out or were evicted from the houses they had been renting from the coal companies, moving into coal camps that were being supported by the Union. Approximately 35,000 people lived in these coal camps. A month after the strike began, hostilities began with the arrival of the Baldwin-Felts Agents who provoked the miners. Socialist Party activists began supplying miners with weapons: 6 machine guns, 1,000 high-powered rifles, and 50,000 rounds of ammunition.

Ephraim Franklin Morgan was born on a farm near Forksburg, Marion County, West Virginia, a descendent of the first white settler of western Virginia, Morgan Morgan, and his son David Morgan. He studied at Fairmont State Normal School and graduated from the West Virginia University law school in 1897. After establishing a law practice in Fairmont, Morgan enlisted in the First West Virginia Infantry during the Spanish–American War. Following the war, he became the Fairmont city attorney. He served as a judge of the Marion County Intermediate Court from 1907 to 1912 and as a member of the West Virginia Public Service Commission from 1915 to 1920. In 1902, he married Alma Bennett.

The Matewan Historic District encompasses the town center of the rural coal mining community of Matewan, West Virginia. Matewan was the scene of the Battle of Matewan on May 19, 1920, during a coal miners' strike, an event which led to the Battle of Blair Mountain, the largest insurrection ever associated with the labor movement in the United States, and was depicted in the film Matewan. It was designated a National Historic Landmark in 1997.

William H. "Bill" Blizzard was a union organizer, a commander of the miners' army during the 1921 Battle of Blair Mountain, and president of District 17 of the United Mine Workers (UMWA). Blizzard is most remembered for his role in the Battle of Blair Mountain, leading the miners against the forces of Logan County sheriff Don Chafin. For his leadership role in the battle, Blizzard was charged with treason, but was acquitted at his trial on these charges. From that time forward, he remained an important leader within the UMWA and organized labor. 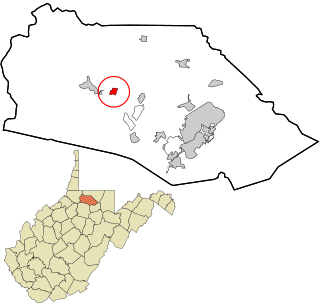 Rachel is a census-designated place (CDP) in Marion County, West Virginia, United States. It is located along Buffalo Creek, 2 miles (3.2 km) east-southeast of Mannington. Rachel has a post office with ZIP code 26587. As of the 2010 census, its population was 248.

The Illinois coal wars, also known as the Illinois mine wars and several other names, were a series of labor disputes between 1898 and 1900 in central and southern Illinois.

The Coal Wars were a series of armed labor conflicts in the United States, roughly between 1890 and 1930. Although they occurred mainly in the East, particularly in Appalachia, there was a significant amount of violence in Colorado after the turn of the century.