Chambers is an unincorporated community in Logan County, West Virginia.

Chambers may refer to:

The Battle of Matewan was a shootout in the town of Matewan in Mingo County and the Pocahontas Coalfield mining district, in southern West Virginia. It occurred on May 19, 1920 between local coal miners and the Baldwin–Felts Detective Agency. 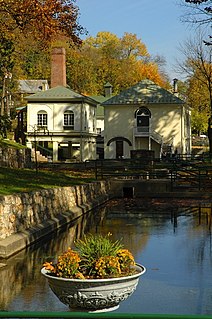 Berkeley Springs State Park is situated in the center of Berkeley Springs, West Virginia, USA. The centerpiece of the Park is its historic mineral spa. These waters were celebrated for their medicinal or restorative powers and were generally taken internally for digestive disorders, or bathed in for stress relief. Native peoples visited these springs as did George Washington. Berkeley Springs is the only state-run spa in the United States and is operated by the West Virginia Division of Natural Resources.

William Sidney "Sid" Hatfield, was Police Chief of Matewan, West Virginia during the Battle of Matewan, a shootout that followed a series of evictions carried out by detectives from the Baldwin-Felts Detective Agency.

Literary Hall is a mid-19th-century brick library, building and museum located in Romney, a city in the U.S. state of West Virginia. It is located at the intersection of North High Street and West Main Street. Literary Hall was constructed between 1869 and 1870 by the Romney Literary Society.

William B. Chambers was an American college basketball player and coach for the William & Mary Tribe.

Glen Jean is a census-designated place (CDP) in Fayette County, West Virginia, United States, near Oak Hill. As of the 2010 census, its population is 210.

Igbo Americans, or Americans of Igbo ancestry, are residents of the United States who identify as having Igbo ancestry from modern day Nigeria. There are primarily two classes of people with Igbo ancestry in the United States, those whose ancestors were taken from Igboland as a result of the transatlantic slave trade before the 20th century and those who immigrated from the 20th century onwards partly as a result of the Nigerian Civil War in the late 1960s and economic instability in Nigeria. Igbo people prior to the American Civil War were brought to the United States by force from their hinterland homes on the Bight of Biafra and shipped by Europeans to North America between the 17th and 19th centuries.

The Igbo in the Atlantic slave trade became one of the main ethnic groups enslaved in the era lasting between the 16th and late 19th century. Located near indigenous Igbo territory, the Bight of Biafra, became the principal area in obtaining Igbo slaves. The Bight’s major slave trading ports were located in Bonny and Calabar; a large number of these Igbo slaves, kidnapped. An estimated 14.6% of slaves were taken from the Bight of Biafra between 1650 and 1900, the third greatest percentage in the era of the transatlantic slave trade.

Lesbian, gay, bisexual, and transgender (LGBT) people in the U.S. state of West Virginia face legal challenges even though homosexual activity and same-sex marriages are legal in West Virginia.

Same-sex marriage has been legally recognized in the U.S. state of West Virginia since October 9, 2014. It was previously banned by state statute.

West Liberty Presbyterian Church, also known as West Liberty Federated Church, is a historic Presbyterian church located at West Liberty, Ohio County, West Virginia. It was built in 1873 to a design by Wheeling architect Stanton M. Howard. It is a simple rectangle in form with a projecting vestibule, in the Late Victorian Gothic style. It is constructed of brick and stone, with steeply pitched roofs, parapet gables, and an open belfry. The church was active in founding West Liberty Academy in 1838, which is now West Liberty University. 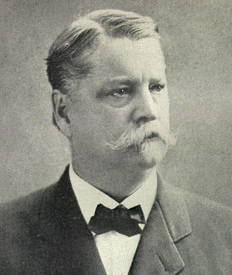