The Baltimore and Ohio Railroad was the first common carrier railroad and the oldest railroad in the United States, with its first section opening in 1830. It came into being mostly because the city of Baltimore wanted to compete with the newly constructed Erie Canal and another canal being proposed by Pennsylvania, which would have connected Philadelphia and Pittsburgh. At first this railroad was located entirely in the state of Maryland, with an original line built from the port of Baltimore west to Sandy Hook. 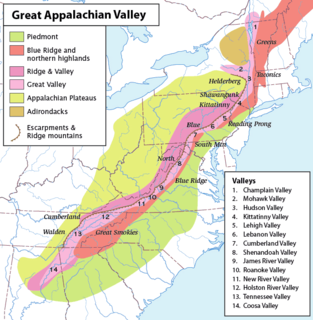 The Allegheny Front is the major southeast- or east-facing escarpment in the Allegheny Mountains in southern Pennsylvania, western Maryland, and eastern West Virginia, USA. The Allegheny Front forms the boundary between the Ridge-and-Valley Appalachians to its east and the Appalachian Plateau to its west. The Front is closely associated with the Appalachian Mountains' Eastern Continental Divide, which in this area divides the waters of the Ohio/Mississippi river system, flowing to the Gulf of Mexico, from rivers flowing into Chesapeake Bay and from there into the Atlantic Ocean.

The Sloan–Parker House is a late 18th-century stone residence near Junction, Hampshire County, in the U.S. state of West Virginia. It was added to the National Register of Historic Places on June 5, 1975, becoming Hampshire County's first property to be listed on the register. The Sloan–Parker House has been in the Parker family since 1854. The house and its adjacent farm are located along the Northwestern Turnpike in the rural Mill Creek valley.

Glebe was an unincorporated community in Hampshire County, West Virginia, United States. It is situated at the lower mouth of the Trough, a gorge of the South Branch Potomac River, and is about 9.5 miles (15.3 km) southwest of Romney on South Branch River Road. The community received its name from the old stone glebehouse (parsonage) that was constructed there in the late 18th century. The stone house later became the Hampshire County Poor Farm and remains standing. The community of Sector lies directly across the river. 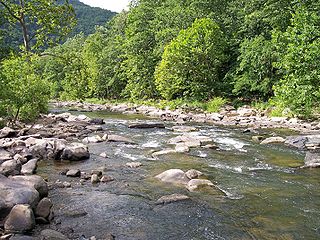 The Bluestone River is a tributary of the New River, 77 mi (124 km) long, in southwestern Virginia and southern West Virginia in the United States. Via the New, Kanawha and Ohio rivers, it is part of the watershed of the Mississippi River. An 11 mi (18 km) portion of its lower course in West Virginia is designated as the Bluestone National Scenic River.

Fairfax Stone Historical Monument State Park is a West Virginia state park commemorating the Fairfax Stone, a surveyor's marker and boundary stone at the source of the North Branch of the Potomac River. The original stone was placed on October 23, 1746 to settle a boundary dispute between Thomas Fairfax, 6th Lord Fairfax of Cameron and the English Privy Council concerning the Northern Neck of Virginia. It determined the proprietorship and boundaries of a large tract of mostly unsurveyed land in the English colonies of Maryland and Virginia.

The Great Eastern Trail is a north-south hiking route that runs roughly 1,600 miles (2,600 km) through the Appalachian Mountains west of the Appalachian Trail in the eastern United States. As of 2019, it is still under development. From south to north, it runs from Flagg Mountain through Alabama, Georgia, Tennessee, Kentucky, West Virginia, Virginia, Maryland, and Pennsylvania, ending in western New York state. A connection from Flagg Mountain south to the Florida-Georgia border is considered "Phase II Development".

The Fairfax Line was a surveyor's line run in 1746 to establish the limits of the "Northern Neck land grant" in colonial Virginia.

Maryland v. West Virginia, 217 U.S. 1 (1910), is a 9-to-0 ruling by the United States Supreme Court which held that the boundary between the American states of Maryland and West Virginia is the south bank of the North Branch Potomac River. The decision also affirmed criteria for adjudicating boundary disputes between states, which said that decisions should be based on the specific facts of the case, applying the principles of law and equity in such a way that least disturbs private rights and title to land. 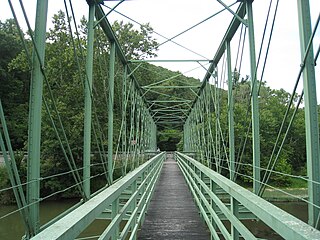