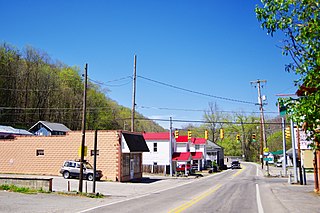 West Logan is a town in Logan County, West Virginia, United States, along the Guyandotte River. The population was 424 at the 2010 census. West Logan is west of the county seat at Logan, hence the name.

The Guyandotte River is a tributary of the Ohio River, approximately 166 mi (267 km) long, in southwestern West Virginia in the United States. It was named after the French term for the Wendat Native Americans. It drains an area of the unglaciated Allegheny Plateau south of the Ohio between the watersheds of the Kanawha River to the northeast and Twelvepole Creek and the Big Sandy River to the southwest. Via the Ohio River, it is part of the Mississippi River watershed.

East Lynn is an unincorporated community in Wayne County, West Virginia, United States, located along the banks of Twelvepole Creek about eight miles south of the county seat, Wayne. It was also known as Mouth of Little Lynn. East Lynn is a part of the Huntington-Ashland Metropolitan Statistical Area (MSA). As of the 2010 census, the MSA had a population of 287,702. New definitions from February 28, 2013 placed the population at 363,000.

The Big Sandy, East Lynn and Guyan Railroad was incorporated on June 16, 1902. 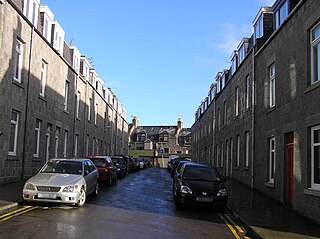 Henry John Burnett was the last man to be hanged in Scotland, and the first in Aberdeen since 1891. He was tried at the high court in Aberdeen from 23–25 July 1963 for the murder of merchant seaman Thomas Guyan. His execution, at HM Prison, Craiginches, Aberdeen, was performed by hangman Harry Allen. 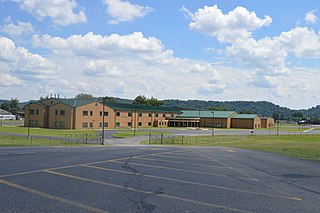 Rome Township is one of the fourteen townships of Lawrence County, Ohio, United States. The 2000 census found 8,694 people in the township, 8,366 of whom lived in the unincorporated portions of the township.

Clay Township is one of the fifteen townships of Gallia County, Ohio, United States. As of the 2010 census the population was 1,870.

Guyan Township is one of the fifteen townships of Gallia County, Ohio, United States. As of the 2010 census the population was 1,166, 753 of whom lived in the unincorporated portions of the township.

Ohio Township is one of the fifteen townships of Gallia County, Ohio, United States. As of the 2010 census the population was 1,126.

Lincoln County High School is a Class AA high school in Hamlin, West Virginia. It was built between 2004 and 2006 and completed in time for the 2006/07 school year.

Guyans-Durnes is a commune in the Doubs department in the Bourgogne-Franche-Comté region in eastern France.

Guyans-Vennes is a commune in the Doubs department in the Bourgogne-Franche-Comté region in eastern France.

Lake Monongahela was a proglacial lake in western Pennsylvania, West Virginia, and Ohio. It formed during the Pre-Illinoian ice epoch when the retreat of the ice sheet northwards blocked the drainage of these valleys to the north. The lake formed south of the ice front continued to rise until it was able to breach a low divide near New Martinsville, West Virginia. The overflow was the beginning of the process which created the modern Ohio River valley.

Fred Bussey Lambert was a West Virginia educator and regional historian. He is best known for his role in establishing Guyan Valley High School, his production of The Llorrac, and the Fred B. Lambert Collection, an assemblage of regional history housed at Marshall University.

The Coal Valley News is a weekly newspaper produced in Madison in the U.S. state of West Virginia. Published on Wednesdays, it has a 2016 circulation of 1,176, and is owned by HD Media.