Last updated June 10, 2021
Cavity where a cartridge is inserted before being fired

Rifles and pistols generally have a single chamber integral to their barrels, but revolvers have multiple chambers in their cylinder, and no chamber in their barrel. Thus, rifles and pistols can usually still be fired with the magazine removed as long as a cartridge is inserted into the chamber, while a revolver cannot be fired at all with its cylinder swung out.[ citation needed ]

The act of chambering a cartridge means the insertion of a round into the chamber, either manually or through the action of the weapon, e.g., pump-action, lever-action, bolt action, or automatic action generally in anticipation of firing the weapon, without need to "load" the weapon upon decision to use it (reducing the number of actions needed to discharge). [3]

In firearms design or modification, "chambering" is fitting a weapon's chamber for a particular caliber or round, [4] so a Colt Model 1911 is chambered for .45 ACP or .38 Super, or re-chambered for .38/.45 Clerke. While the majority of firearms are chambered for one caliber, some are chambered for multiple calibers; however firing an oversized or undersized cartridge can be hazardous. [2]

The chamber is a key component to the practice of Forensic firearm examination. The chamber is known to imprint its surface striations irregularities on the cartridge case, in what are called chamber marks, due to the pressure produced when shooting. [5] [6] [7] Such imperfections in chamber may be produced in the manufacturing process or through extensive use. [8] Such chamber marks are even more pronounced on substandard firearms or when firing a from an undersized chamber. [5]

In recent years there has been a push to automate this process via the use of automated firearms databases. [9] Ballistics identification has also seen the development of microstamping technology which purposefully creates chamber marks through engravings on the firing pin and breech face. [10] 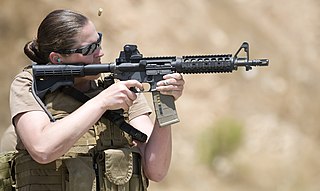 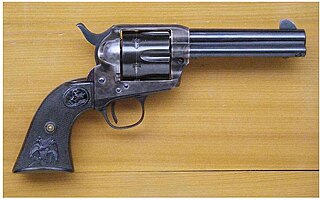 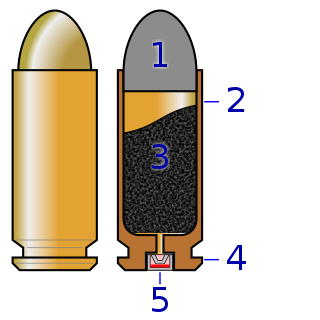 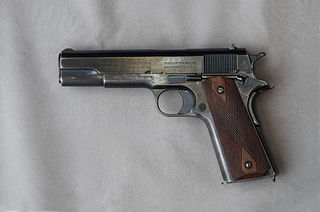 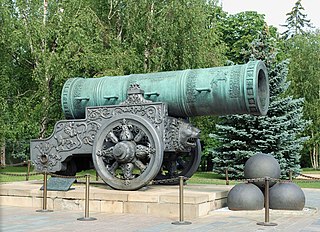 An automatic revolver is a revolver that uses the energy of firing for cocking the hammer and revolving the cylinder, rather than using manual operations to perform these actions. Despite the name "automatic", such revolvers are actually semi-automatic as the gun will not continue shooting and the shooter still needs to manually actuate the trigger to discharge each shot.

A rim is an external flange that is machined, cast, molded, stamped, or pressed around the bottom of a firearms cartridge. Thus, rimmed cartridges are sometimes called "flanged" cartridges. Almost all cartridges feature an extractor or headspacing rim, in spite of the fact that some cartridges are known as "rimless cartridges". The rim may serve a number of purposes, including providing a lip for the extractor to engage, and sometimes serving to headspace the cartridge.

H&R 1871, LLC is a manufacturer of firearms under the Harrington & Richardson and New England Firearms trademarks. H&R is a subsidiary of the Remington Outdoor Company. H&R ceased production February 27, 2015.

Break action is a type of firearm action in which the barrel or barrels are hinged much like a door and rotate perpendicularly to the bore axis to expose the breech and allow loading and unloading of cartridges. A separate operation may be required for the cocking of a hammer to fire the new round. There are many types of break-action firearms; break actions are universal in double-barrelled shotguns, double rifles and combination guns, and are also common in single shot rifles, pistols, and shotguns, and can also be found in flare guns, grenade launchers, air guns and some older revolver designs. They are also known as hinge-action, break-open, break-barrel, break-top, or, on old revolvers, top-break actions.

An antique firearm is a term to describe a firearm that was designed and manufactured prior to the beginning of the 20th century. Although the exact definition of what constitutes an "antique firearm" varies between countries, the advent of smokeless powder or the start of the Boer War are often used as cut-off dates. Antique firearms are usually collected because of their historical interest and/or their monetary value. 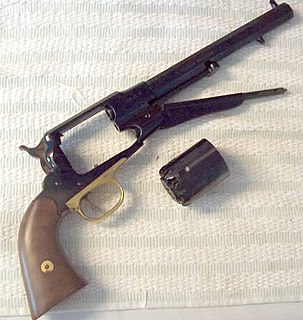 In firearms, the cylinder is the cylindrical, rotating part of a revolver containing multiple chambers, each of which is capable of holding a single cartridge. The cylinder rotates (revolves) around a central axis in the revolver's action to sequentially align each individual chamber with the barrel bore for repeated firing. Each time the gun is cocked, the cylinder indexes by one chamber. Serving the same function as a rotary magazine, the cylinder stores ammunitions within the revolver and allows it to fire multiple times before needing to reload.

Chiappa Firearms, Armi Sport di Chiappa, is an Italian firearms manufacturing company based in Brescia. It was founded in 1958 by Ezechiele Chiappa as Armi Sport. Total unit production is around 60,000 per year. Its U.S. headquarters are in Dayton, Ohio.