Enclosed religious orders or cloistered clergy are religious orders whose members strictly separate themselves from the affairs of the external world. In the Catholic Church, enclosure is regulated by the code of canon law, either the Latin code or the Oriental code, and also by the constitutions of the specific order. [1] [2] [3] It is practised with a variety of customs according to the nature and charism of the community in question. This separation may involve physical barriers such as walls and grilles (that is, a literal cloister), with entry restricted for other people and certain areas exclusively permitted to the members of the convent. Outsiders may only temporarily enter this area under certain conditions (for example, if they are candidates for the order, doctors or craftsmen). The intended purpose for such enclosure is to prevent distraction from prayer and the religious life and to keep an atmosphere of silence.

Under certain circumstances, exceptions may be granted for enclosed men or women to leave the enclosure temporarily or permanently.

Enclosed religious orders of men include monks following the Rule of Saint Benedict, namely the Benedictine, the Cistercian, and the Trappist orders, but also monks of the Carthusians, Hieronymites, and some branches of Carmelites, along with members of the Monastic Family of Bethlehem, while enclosed religious orders of women include Canonesses Regular, nuns belonging to the Benedictine, Cistercian, Trappist and the Carthusian orders, along with nuns of the second order of each of the mendicant orders, including: the Poor Clares, the Colettine Poor Clares, the Capuchin Poor Clares, the Dominicans, Carmelites, Servites, Augustinians, Minims, together with the Conceptionist nuns, the Visitandine nuns, Ursuline nuns and such of the Monastic Family of Bethlehem.

The English word monk most properly refers to men in monastic life, while the term friar more properly refers to mendicants active in the world (like Franciscans, Dominicans and Augustinians), though not all monasteries require strict enclosure. Benedictine monks, for instance, have often staffed parishes and been allowed to leave monastery confines.

Although the English word nun is often used to describe all Christian women who have joined religious institutes, strictly speaking, women are referred to as nuns only when they live in papal enclosure; otherwise, they are religious sisters. [4] The distinctions between the Christian terms monk, nun, friar, Brother, and Sister are sometimes easily blurred because some orders (such as the Dominicans or Augustinians) include nuns who are enclosed, who are usually grouped as the Second Order of that movement, and religious sisters.

In the Roman Rite of the Catholic Church, once a man or woman has made solemn, perpetual religious vows, the release from these monastic vows has to be approved by the ecclesiastical authorities. Normally there is a transitional period, called exclaustration, in which the person looks to establish a new life and determine if this is what he or she is truly called to do. This usually lasts up to six years under the 1983 Code of Canon Law. After this period the appropriate authority, generally the Holy See, determines that the wish to leave this life is valid and grants the former monk or nun release from their vows.

Lutheran and Anglican religious orders have different procedures for the release from perpetual vows.

Contemplative orders [5] prioritise worship [6] and prayer over economic or outreach activity. They exist in the Roman Catholic, Anglican and Eastern Orthodox [7] traditions as well as in Buddhist [8] settings.

A religious institution of vowed members whose superior is a prior. Dominicans, Augustinians, Franciscans, Carmelites, Carthusians, Servites, and Brothers of Mercy call all their institutions priories. The Benedictines and their offshoots, the Premonstratensians, and the military orders distinguish between conventual and simple or obedientiary priories. Conventual priories are those autonomous houses which have no abbots, either because the canonically required number of twelve monks has not yet been reached or for some other reason. The Congregation of Cluny had many conventual priories. There were likewise many conventual priories in Germany and Italy during the Middle Ages, and in England all monasteries attached to cathedral churches were known as cathedral priories. Simple or obedientiary priories are dependencies of abbeys. Their superior, who is subject to the abbot in everything, is called simple or obedientiary prior. Houses of canons regular and canonesses regular also use this term, the alternative being "canonry".

A cloister is a covered walk, open gallery, or open arcade running along the walls of buildings and forming a quadrangle or garth. The attachment of a cloister to a cathedral or church, commonly against a warm southern flank, usually indicates that it is part of a monastic foundation, "forming a continuous and solid architectural barrier... that effectively separates the world of the monks from that of the serfs and workmen, whose lives and works went forward outside and around the cloister."

The cowl is an item of clothing consisting of a long, hooded garment with wide sleeves. Originally it may have referred simply to the hooded portion of a cloak. In contemporary usage, however, it is distinguished from a cloak or cape (cappa) by the fact that it refers to an entire closed garment. Today it is worn primarily by most Catholic and Anglican monks when participating in liturgical services. 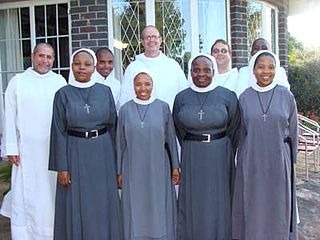 The Congregation of Windesheim is a branch of the Augustinians. It takes its name from its most important monastery, which was located at Windesheim, about four miles south of Zwolle on the IJssel, in the Netherlands.