Sisters of the Holy Cross

They are distinct from the Sisters of the Holy Cross Menzingen, a teaching congregation founded separately in Switzerland in 1844.

In 1837, Father Moreau, established the Congregation of Holy Cross. The congregation took its name from the neighborhood of Sainte Croix in Le Mans, where the 12th-century church, Notre Dame du Sainte Croix, was to become the mother church of the new foundation. [1] In 1841 Fr. Moreau founded a society of sisters within the Congregation. [2]

In June 1843, four sisters left the mother house in France to join Father Edward Sorin C.S.C. at his mission at Notre Dame, Indiana. A second story had been added to the log chapel at Notre Dame for their convent. The Sisters of the Holy Cross had been founded originally to care for the housework in the boarding schools conducted by the priests. Upon their arrival, they took charge of the sacristy, infirmary, clothes room, etc. In 1844 a novitiate was opened at Bertrand, Michigan, six miles from Notre Dame. The sisters taught the children of the neighbourhood, and cared for several orphans. With assistance from the Society of the Propagation of the Faith the sisters were able to extend their work. [3]

A school was opened at Pokagon, Michigan, in 1845. This was followed by other foundations at St. John's, Mackinac, Louisville, Lowell (Indiana), Laporte, Michigan City, and Mishawaka. In 1847 four sisters with some companions from the mother-house in France opened a convent at St. Laurent, Canada, which formed the nucleus of the subsequently erected province. In 1849 four sisters took charge of the boys' orphan asylum in New Orleans, and from there a house was opened in 1854 in New York with the sanction of Father Moreau. Sisters were sent to this establishment from Notre Dame, Canada, and New Orleans. Misunderstandings due to orders issued from France and Notre Dame led to the withdrawal of the American sisters from the new foundations, the houses of New Orleans and New York remaining subject to France. The year 1856 saw the sisters well-established in Chicago and Philadelphia. They had charge of the cathedral parochial school, St. Joseph's German school, and an industrial school in Chicago, and were installed in St. Paul's and St. Augustine's schools in Philadelphia. Later they opened a select school for boarders and day-pupils in West Philadelphia. These foundations all promised success, but the strained relations between the mother-house at Le Mans under Father Moreau and the Provincial House at Notre Dame under Father Sorin led to the recall of the sisters. In 1853, Eliza Gillespie, sister of Neal Henry Gillespie C.S.C., received the habit from Father Sorin, and sailed for France to make her novitiate as Sister Angela. After profession, she returned to Bertrand and took charge of the academy, 1854. From that time until her death (1887), Mother Angela laboured indefatigably to develop the highest intellectual and religious qualities in both teachers and students, and must be regarded as the virtual foundress of the order in the United States. [3]

On 15 August, 1855, the convent and academy were moved from Bertrand to South Bend, Indiana. St. Mary's Academy and eventually grew to become Saint Mary's College. [4] By 1861 the sisters were operating schools and orphanages throughout the eastern half of the United States.

When Father Moreau visited the provinces of Canada, Louisiana, and Notre Dame in 1857, he promulgated the Decree of Separation of the sisters from the priests and brothers. In 1869, at the advice of Bishop John Henry Luers of Fort Wayne, the Sisters of the Holy Cross in the United States separated from the motherhouse in France and formed a distinct congregation. [3]

Oliver P. Morton, governor of Indiana, requested the assistance of 12 sisters from the congregation. Mother Angela Gillespie along with five other sisters volunteered as nurses. The sisters were sent to Cairo, Illinois, where they met General Ulysses S. Grant. The sisters were then sent to the regimental headquarters of General Lew Wallace’s brigade in Paducah, Kentucky. All told, some eighty sisters served as nurses, managing hospitals in Kentucky, Illinois, Tennessee, Missouri, and Washington, DC. [5]

Thomas Ewing, father-in-law of General William Tecumseh Sherman, was a kinsman of Mother Angela; U.S. Representative James G. Blaine was her cousin. When generals failed to secure needed aid for the sick and wounded, she made trips to Washington on their behalf. Her influence in Washington was significant both because of her family connections and because of the recognition of her work for the sick and wounded soldiers. Eighty sisters nursed the wounded and ill soldiers in Illinois, Missouri, Kentucky and Tennessee. Four sisters served on the U.S. Navy's first hospital ship, the "Red Rover". They were the first female nurses to serve on board a Navy ship. [6] [7]

Commander Davis of the Western Flotilla presented Mother Angela with two civil war cannons, "Lady Polk" and "Lady Davis." During WWII, the cannons were melted down for scrap iron. There is a monument that stands in memory of the sisters that served in the Civil War erected September 20, 1924. It is located in Washington D.C., across from St Matthew's Cathedral. [8]

The Sisters of the Holy Cross are represented in the following countries:

John Francis O'Hara was an American member of the Congregation of Holy Cross and prelate of the Catholic Church. He served as President of the University of Notre Dame (1934–39) and as the Archbishop of Philadelphia from 1951 until his death, and was elevated to the cardinalate in 1958.

Rev. Edward Frederick Sorin, C.S.C. was a priest of the Congregation of Holy Cross and the founder of the University of Notre Dame in Indiana and of St. Edward's University in Austin, Texas.

Saint Mary's College is a Catholic women's liberal arts college in Notre Dame, Indiana. Founded in 1844 by the Sisters of the Holy Cross, the name of the school refers to the Blessed Virgin Mary. 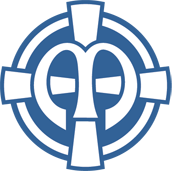 The Basilica of the Sacred Heart in Notre Dame, Indiana, USA, is a Roman Catholic church on the campus of the University of Notre Dame, also serving as the mother church of the Congregation of Holy Cross (C.S.C.) in the United States. The neo-gothic church has 44 large stained glass windows and murals completed over a 17-year period by the Vatican painter Luigi Gregori. The basilica bell tower is 230 feet (70 m) high, making it the tallest University chapel in America. It is a contributing building in Notre Dame's historic district listed on the National Register of Historic Places. The Basilica is a major tour attraction in Northern Indiana, and is visited annually by more than 50,000 tourists.

Ave Maria Press is a Roman Catholic publishing company which was founded on May 1, 1865 by Father Edward Sorin, a Holy Cross priest who had founded the University of Notre Dame. 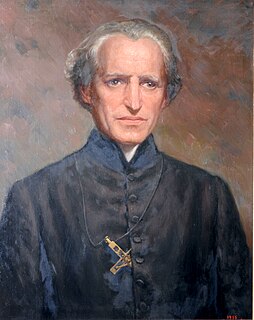 A teaching order is a Catholic religious institute whose particular charism is education. Many orders and societies sponsor educational programs and institutions, and teaching orders participate in other charitable and spiritual activities; a teaching order is distinguished in that education is a primary mission.

Eleanor Mary Sherman Thackara, is most known as the daughter of Gen. William Tecumseh Sherman of American Civil War fame and his wife, Ellen Ewing Sherman. Married to a diplomat, she spent a good deal of her time in Europe.

Old College, built in 1843 by the founder of the University of Notre Dame, Rev. Edward Sorin, C.S.C., and the rest of the Holy Cross brothers, is the oldest standing building on campus. Together with other historic structures of the university, it is on the National Register of Historic Places.

Eliza Maria Gillespie, in religion Mother Mary of St. Angela, C.S.C., was an American Religious Sister, Mother Superior, and foundress of many works of the Sisters of the Holy Cross in the United States.

Neal Henry Gillespie, C.S.C. was an American Catholic religious figure. A priest of the Congregation of Holy Cross, he served as vice-president of Notre Dame, and later president of the College of St. Mary of the Lake in Chicago.

University of Notre Dame's Main Administration Building houses various administrative offices, including the Office of the President. Atop of the building stands the Golden Dome, the most recognizable landmark of the university. Three buildings were built at the site; the first was built in 1843 and replaced with a larger one in 1865, which burned down in 1879, after which the third and current building was erected. The building hosts the administrative offices of the university, as well as classrooms, art collections, and exhibition spaces. The building is listed on the National Register of Historic Places.

Mother Marie Helene Franey, S.P., was the Superior General of the Sisters of Providence of Saint Mary-of-the-Woods, Indiana from 1948-1953. In 1952, she was appointed by the Sacred Congregation of Religious in Rome to serve on an International Commission of 40 superior generals. She was one of three superior generals from the United States to serve on this Commission. 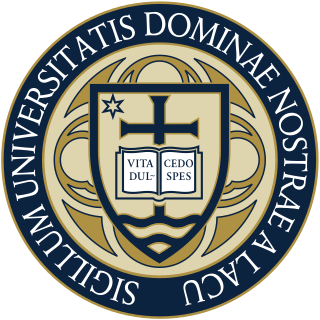 Edward F. Sorin is an outdoor sculpture by Italian sculptor Ernesto Biondi. It is located on the campus of the University of Notre Dame near South Bend, Indiana. The eight foot tall statue depicting the founder of Notre Dame is placed on the main quadrangle of the University near the Main Building. The statue, made of bronze, was unveiled on its campus on May 3, 1906.