Eve Stewart (born 1961) is a British production designer. She grew up in Camden Town and later trained in film, originally working in theatre. She later became a set designer, starting with Naked in 1993. In 1999, she received a nomination for an Academy Award for Best Production Design for Topsy-Turvy . She later began a collaboration with director Tom Hooper, working on Elizabeth I , The Damned United , The King's Speech , Les Misérables , and The Danish Girl .

Stewart has won several awards, including a BAFTA Award for Best Production Design, an ADG Excellence in Production Design Award, and a Creative Arts Emmy Award. She has been nominated four times for an Academy Award, with her most recent nomination being in 2016. She also served as production designer for Paul McGuigan's film Victor Frankenstein .

Eve Stewart was born in London, England in 1961. [1] She grew up in Camden Town. [2] Stewart studied theatre design at Central Saint Martins, and later acquired a Masters in Architecture from the Royal College of Art. Initially, Stewart worked as a theatre designer. Eventually, she did a play for Mike Leigh at the Hampstead Theatre, who then offered her the post of art director for an upcoming project. [3]

Stewart's first film credit was as art director on Leigh's film Naked . She described the experience as "very hard work" and "a bit of a shock". [4] [5] Stewart served as art director on Secrets & Lies and as set designer on Career Girls and Topsy-Turvy ; [1] she was nominated for an Academy Award for Best Production Design for her work on the latter. [6] In 2000, Stewart was the set designer for New Year's Day , Saving Grace , and Sorted , while in 2001 she served that position on Goodbye Charlie Bright and The Hole . [6]

Stewart served as production designer on Hooper's 2010 film The King's Speech . Before working on the film, she researched the settings for the script by viewing old newsreels and touring the Victoria and Albert Museum.[ citation needed ] Her work on The King's Speech received several award nominations. She won an ADG Excellence in Production Design Award, [10] and has said that it is the award she is the most proud of. [3] Stewart also received a Los Angeles Film Critics Association Award, and was nominated for an Academy Award and a BAFTA Award. [6]

Stewart collaborated with Hooper once more in 2012, when she worked as production designer on Les Misérables . [2] For reference, Stewart followed the film protagonist's route through France. She also visited the house of the story's author, Victor Hugo. [2] Stewart received her third Academy Award nomination for the film, as well as winning a BAFTA Award. [6] She received her first Saturn Award nomination for her work on the film. [11] Stewart was later hired on Muppets Most Wanted [12] and has served as production designer on Paul McGuigan's Victor Frankenstein . [13] 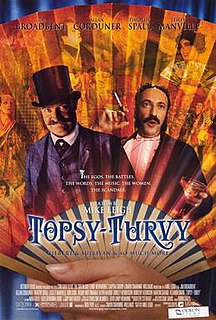 Topsy-Turvy is a 1999 British musical period drama film written and directed by Mike Leigh, starring Allan Corduner as Sir Arthur Sullivan and Jim Broadbent as W. S. Gilbert, along with Timothy Spall, Lesley Manville and Ron Cook. The story concerns the 15-month period in 1884 and 1885 leading up to the premiere of Gilbert and Sullivan's The Mikado. The film focuses on the creative conflict between playwright and composer, and their decision to continue their partnership, which led to their creation of several more Savoy operas.

Marianne Raigipcien Jean-Baptiste is an English actress. She is known for her role in the 1996 comedy-drama film Secrets & Lies, for which she received acclaim and earned nominations for the Academy Award for Best Supporting Actress and the Golden Globe and BAFTA Award in the same category. Baptiste is also known for her role as Vivian Johnson on the television series Without a Trace from 2002 to 2009, and has since starred in television shows such as Blindspot (2015–2016) and Homecoming.

Jacqueline Durran is a British costume designer. She received considerable attention for her work on Pride & Prejudice (2005), for which she was nominated for both an Academy Award for Best Costume Design and BAFTA Award for Best Costume Design. She has won two Academy Awards for Costume Design for the films Anna Karenina (2012) and Little Women (2019), and has been nominated seven times for the award. She has also been nominated nine times for a BAFTA Award, winning for Vera Drake (2004), Anna Karenina, and Little Women. Durran has been a frequent collaborator with directors Mike Leigh and Joe Wright, having designed the costumes for six times on Leigh and Wright's films. 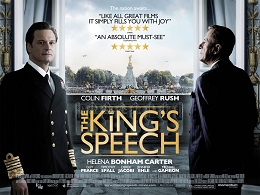 The King's Speech is a 2010 British historical drama film directed by Tom Hooper and written by David Seidler. Colin Firth plays the future King George VI who, to cope with a stammer, sees Lionel Logue, an Australian speech and language therapist played by Geoffrey Rush. The men become friends as they work together, and after his brother abdicates the throne, the new king relies on Logue to help him make his first wartime radio broadcast upon Britain's declaration of war on Germany in 1939.

Anastasia Masaro is a production designer who was nominated for both an Academy Award and BAFTA for Best Production Design for the film The Imaginarium of Doctor Parnassus.