Norman Stuart Craig OBE (born 14 April 1942) is a noted British production designer. He has also designed the sets, together with his frequent collaborator set decorator, the late Stephenie McMillan, on all of the Harry Potter films to date.

At Potter author J. K. Rowling's request, he worked with Universal Creative team to design the Wizarding World of Harry Potter at Universal's Islands of Adventure theme park. Rowling said in a December 2007 interview on the Potter podcast PotterCast , "The key thing for me was that, if there was to be a theme park, that Stuart Craig … would be involved. … More than involved, that he would pretty much design it. Because I love the look of the films; they really mirror what’s been in my imagination for all these years". [1]

He has been nominated for eleven Academy Awards, and has won three: in 1982 for Gandhi , in 1988 for Dangerous Liaisons , and in 1996 for The English Patient . He has been nominated for a BAFTA award fifteen times, including for the first six and last Potter films, and has won three times: in 1980 for The Elephant Man , in 2005 for Harry Potter and the Goblet of Fire , and in 2016 for Fantastic Beasts and Where to Find Them . [2]

Harry Potter fandom refers to the community of fans of the Harry Potter books and movies who participate in entertainment activities that revolve around the series, such as reading and writing fan fiction, creating and soliciting fan art, engaging in role-playing games, socializing on Harry Potter-based forums, and more. The fandom interacts online as well as offline through activities such as fan conventions, participating in cosplay, tours of iconic landmarks relevant to the books and production of the films, and parties held for the midnight release of each book and film.

MuggleNet is a Harry Potter fansite founded by Emerson Spartz. The site is composed of news, editorials, and synopses of the Harry Potter books and films, an encyclopedia of the books, an IRC network, in which the fans of Harry Potter can discuss predictions and share thoughts, a discussion forum, and media such as screenshots, theatrical trailers, and book covers. There is also a fan fiction section, a weekly caption contest, and other occasional contests and polls. On August 9, 2005, it launched a podcast, dubbed MuggleCast, as well as its own line of clothing, toy wands, and other merchandise. In 2006, MuggleNet released a best-selling reference book on Harry Potter and the Deathly Hallows, the final book in the series. As of 2008, MuggleNet is owned by Spartz, Inc., an Indiana corporation registered by Emerson Spartz in 2007. On May 29, 2010, MuggleNet 2.0, an updated version of the site, went live. On April 1, 2014, MuggleNet 3.0 was launched to the public.

David Yates is an English filmmaker who has directed films, short films, and television productions. He is best known for directing the later four films in the Harry Potter series. His work on the series brought him critical and commercial success along with accolades, such as the British Academy Britannia Award for Excellence in Directing.

Harry Potter is a series of fantasy novels written by British author J. K. Rowling. The novels chronicle the lives of a young wizard, Harry Potter, and his friends Hermione Granger and Ron Weasley, all of whom are students at Hogwarts School of Witchcraft and Wizardry. The main story arc concerns Harry's struggle against Lord Voldemort, a dark wizard who intends to become immortal, overthrow the wizard governing body known as the Ministry of Magic and subjugate all wizards and Muggles.

The Leaky Cauldron, also called Leaky, TLC, or Leaky News, is a Harry Potter fansite and blog. The site features news, image and video galleries, downloadable widgets, a chat room and discussion forum, and an essay project called Scribbulus, among other offerings. Since 2005, the Leaky Cauldron has also hosted an official podcast, called PotterCast.

Evanna Patricia Lynch is an Irish actress, activist, voice actress and narrator. She rose to prominence for her role as Luna Lovegood in the Harry Potter film series, appearing in the last four films and their tie-in video games, as well as in the 2012 musical A Very Potter Senior Year. As an activist, Lynch focuses on veganism and animal rights. She has been involved in many non-profit campaigns and launched both a vegan-themed podcast and the cruelty-free cosmetics brand Kinder Beauty Box.

Harry Potter is a British-American film series based on the eponymous novels by author J. K. Rowling. The series is distributed by Warner Bros. and consists of eight fantasy films, beginning with Harry Potter and the Philosopher's Stone (2001) and culminating with Harry Potter and the Deathly Hallows – Part 2 (2011). A spin-off prequel series will consist of five films started with Fantastic Beasts and Where to Find Them (2016), marking the beginning of the Wizarding World shared media franchise. 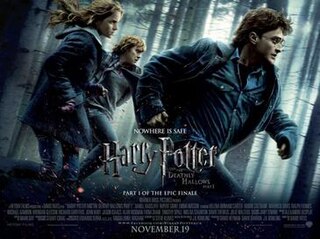 Harry Potter Fan Zone is an Australian Harry Potter fansite created in 2003 by Australian teenager Andy McCray. Harry Potter author J. K. Rowling awarded the website a "Fan Site Award," stating that "[it] is a great Australian site with an impressively young staff who have produced some really insightful editorials." 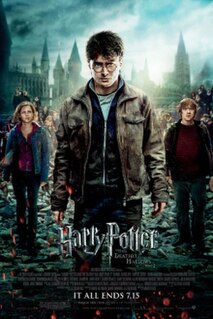 The Wizarding World is a fantasy media franchise and shared fictional universe centred on a series of films, based on the Harry Potter novel series by J. K. Rowling. The films have been in production since 2000, and in that time ten films have been produced—eight are adaptations of the Harry Potter novels and two are part of the Fantastic Beasts series. The films are owned and distributed by Warner Bros. Pictures, and three more are in various stages of production. The series has collectively grossed over $9.2 billion at the global box office, making it the third-highest-grossing film franchise of all time.