Fort Copacabana (Portuguese : Forte de Copacabana, IPA:  [ˈfɔʁtʃi dʒi ˌkɔpɐkɐˈbɐ̃na] ) is a military base at the south end of the beach that defines the district of Copacabana, Rio de Janeiro. The base is open to the public and contains the Museu Histórico do Exército (Army Historical Museum) and a coastal defense fort that is the actual Fort Copacabana.

The fort is built on a headland that originally contained a small chapel holding a replica of the Virgen de Copacabana, the patron saint of Bolivia. In 1908 the Brazilian army started to build a modern coastal defense fort on the headland to protect both the beach of Copacabana and the entrance to the harbour of Rio de Janeiro. The fort, completed in 1914, consists of two armoured cupolas, one holding a pair of 305 mm (12 in) Krupp cannons, and the other a pair of 190 mm (7 1⁄2 in) Krupp cannons.

The fort also has two small retractable casements on the flanks, each of which held a 75 mm (3 in) quick-firing gun with a 180° traverse and a range of 7 km (4.3 mi). Unlike the large Krupp guns, these 75 mm guns are no longer in place. The north casement is named "Antônio João" and the south casement is named "Ricardo Franco". [Note 2]

On 5 July 1922, the fort was the centre point of the 18 of the Copacabana Fort revolt. It was the first revolt of the tenentista movement, in the context of the Brazilian Old Republic. The rebellious officers turned the fort's guns on Rio de Janeiro. To suppress the revolt, the government brought the battleships São Paulo and Minas Geraes. On 6 July São Paulo bombarded the fort, firing five salvos and obtaining at least two hits; the fort surrendered half an hour later. [1] Minas Geraes did not fire.

Brazil disbanded its coastal defense artillery branch in 1987. At that time the military deactivated the fort, at least as far as its role as a coastal artillery post was concerned. Except for the cupola at the fort on San Paolo Island outside the harbour of Taranto, the cupolas of Copacabana fort, together with other cupolas at nearby Fort Lage (Forte Tamandaré da Laje: 2 × 240 mm, 2 × 150 mm, and 2 × 2 × 75 mm) and Fort Imbui (Forte D. Pedro II do Imbuí: 2 × 280 mm L/40 and 2 × 2 × 75 mm L/25 Krupp guns), are the only remaining heavy fortress cupolas of the Krupp design in the world.

The hours for the Museum are 10 am to 6 pm and the fort are 10 am to 8 pm, Tuesday to Sunday and holidays. Admission for adults is R$6 per adult; there are discounts and free tours for the elderly and children. At the entrance to the base there is a guard in the uniform that was current when the fort was opened in 1914.

The museum has several exhibits focusing on different periods and events in the history of the army in Brazil. The Brazilian Expeditionary Force's participation in the Italian campaign in World War II gets only limited treatment, and Brazil's involvement in World War I receives no treatment.

Outside the museum there are several artillery pieces from the late 19th and early 20th centuries. For instance, one field piece is a 5-barrel quick-firing gun, each barrel being of 37 mm (1 1⁄2 in). Brazil purchased this Hotchkiss revolving cannon in 1876. Another field piece is a British-made Vickers-Armstrong Mark XIX 6-inch (152.4 mm) gun, made in 1918. Brazil purchased this piece in 1940 for use in coastal defense. There are also three 75 mm (3 in) Schneider M1919 mountain guns.

For the 2016 Summer Olympics, the fort hosted the cycling road race (start and finish), marathon swimming and triathlon events. [2] [3]

The Canon de 75 M (montagne) modèle 1919 Schneider was a French mountain gun designed as a replacement of the 65 mm mle 1906. The mle 1919 was manufactured by Schneider et Cie and used during World War II. For transport, the gun could be broken down into seven sections. This weapon was used by Brazil, Greece, Paraguay, and Yugoslavia. When captured by the Germans in World War II, the French guns were designated 7.5 cm GebK 237(f); the Yugoslav guns were designated 7.5 cm GebK 283(j). The gun crew was protected by an armoured shield.

Marshal João Baptista Mascarenhas de Morais was a Brazilian army officer and commander of the Brazilian Expeditionary Force in the Second World War. He was ranked Field Marshal and was the last active Brazilian marshal. 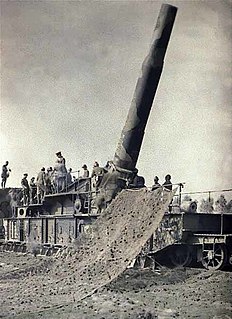 A railway gun, also called a railroad gun, is a large artillery piece, often surplus naval artillery, mounted on, transported by, and fired from a specially designed railway wagon. Many countries have built railway guns, but the best-known are the large Krupp-built pieces used by Germany in World War I and World War II. Smaller guns were often part of an armoured train. Only able to be moved where there were good tracks, which could be destroyed by artillery bombardment or airstrike, railway guns were phased out after World War II.

The Hotchkiss gun can refer to different products of the Hotchkiss arms company starting in the late 19th century. It usually refers to the 1.65-inch (42 mm) light mountain gun; there were also a navy (47 mm) and a 3-inch (76 mm) Hotchkiss guns. The 42 mm gun was intended to be mounted on a light carriage or packed on two mules to accompany a troop of cavalry or an army travelling in rough country. 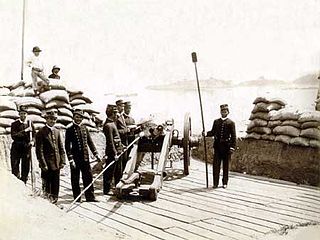 The Brazilian Naval Revolts, or the Revoltas da Armada, were armed mutinies promoted mainly by Admirals Custódio José de Melo and Saldanha Da Gama and their fleet of Brazilian Navy ships against the unconstitutional staying in power of the central government in Rio de Janeiro.

São Paulo was a dreadnought battleship designed and built by the British companies Armstrong Whitworth and Vickers, respectively, for the Brazilian Navy. It was the second of two ships in the Minas Geraes class, and was named after the state and city of São Paulo.

The Canon de 155 Grande Puissance Filloux (GPF) mle.1917 was a WWI-era French-designed 155 mm gun used by the French Army and the United States Army during the first half of the 20th century in towed and self-propelled mountings. 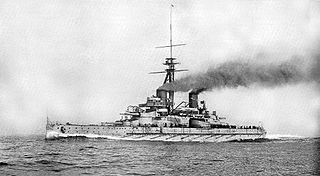 Minas Geraes, spelled Minas Gerais in some sources, was a dreadnought battleship of the Brazilian Navy. Named in honor of the state of Minas Gerais, the ship was laid down in April 1907 as the lead ship of its class, making the country the third to have a dreadnought under construction and igniting a naval arms race between Brazil, Argentina, and Chile. 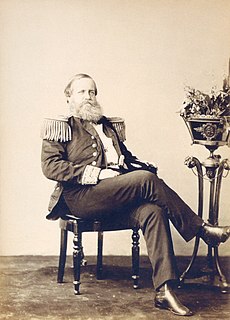 The Armed Forces of the Empire of Brazil were the overall unified military forces of the Empire of Brazil. The Brazilian military was first formed by Emperor Dom Pedro I to defend the new nation against the Portuguese in the Brazilian War of Independence. The Army and Armada were commissioned in 1822 with the objective of defeating and expelling the Portuguese troops from Brazilian soil.

Bahia was the lead ship of a two-vessel class of cruisers built for Brazil by the British company Armstrong Whitworth. Crewmen mutinied in November 1910 aboard Bahia, Deodoro, Minas Geraes, and São Paulo, beginning the four-day Revolta da Chibata. Brazil's capital city of Rio de Janeiro was held hostage by the possibility of a naval bombardment, leading the government to give in to the rebel demands which included the abolition of flogging in the navy. During the First World War, Bahia and her sister ship Rio Grande do Sul were assigned to the Divisão Naval em Operações de Guerra, the Brazilian Navy's main contribution in that conflict. The squadron was based in Sierra Leone and Dakar and escorted convoys through an area believed to be heavily patrolled by U-boats. 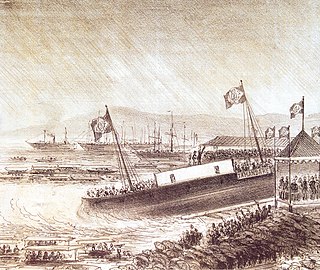 The Brazilian ironclad Tamandaré was an armored gunboat built for the Brazilian Navy during the Paraguayan War in the mid-1860s. She bombarded the Paraguayan fortifications blocking access up the Paraná and Paraguay Rivers as well as bombarding Paraguayan positions in support of the Brazilian Army. The ship participated in the Passage of Humaitá in February 1868 and was badly damaged. After Tamandaré was repaired she provided fire support for the army for the rest of the war, aside from bombarding Paraguyan capital of Asunción once. The ship was assigned to the Mato Grosso Flotilla after the war. Tamandaré was decommissioned in 1879 and scrapped afterwards.

The Pará-class monitors were a group of six wooden-hulled ironclad monitors named after Brazilian states and built in Brazil for the Brazilian Navy during the Paraguayan War in the late 1860s. The first three ships finished, Pará, Alagoas and Rio Grande, participated in the Passagem de Humaitá in February 1868. Afterwards the remaining ships joined the first three and they all provided fire support for the army for the rest of the war. The ships were split between the newly formed Upper Uruguay and Mato Grosso Flotillas after the war. Alagoas was transferred to Rio de Janeiro in the 1890s and participated in the Fleet Revolt of 1893–94.

The Brazilian monitor Alagoas was the third ship of the Pará-class river monitors built for the Brazilian Navy during the Paraguayan War in the late 1860s. Alagoas participated in the Passage of Humaitá in February 1868 and provided fire support for the army for the rest of the war. The ship was assigned to the Upper Uruguay Flotilla after the war. Alagoas was transferred to Rio de Janeiro in the 1890s and participated in the Fleet Revolt of 1893–94. The ship was scrapped in 1900. 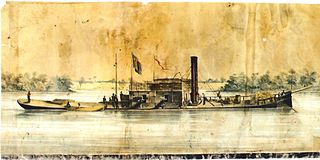 The Brazilian ironclad Barroso was an armoured gunboat built for the Brazilian Navy during the Paraguayan War in the mid-1860s. Barroso bombarded Paraguayan fortifications in 1866 and 1867 a number of times before she participated in the Passagem de Humaitá in February 1868. Afterwards the ship provided fire support for the army for the rest of the war. She was assigned to the Mato Grosso Flotilla after the war. Barroso was decommissioned in 1882, but was not scrapped until 1937.

The Minas Geraes class, spelled Minas Gerais in some sources, consisted of two battleships built for the Brazilian Navy in the early twentieth century. Named Minas Geraes and São Paulo, the ships were intended to be Brazil's first step towards becoming an international power, and they consequently initiated a South American naval arms race. 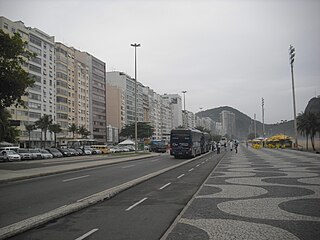 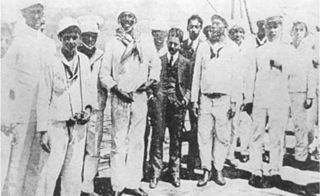 The Revolt of the Lash was a naval mutiny in Rio de Janeiro, Brazil, in late November 1910. It was the direct result of the use of whips ("lashes") by white naval officers when punishing Afro-Brazilian and mulatto enlisted sailors.

The Imperial Brazilian Navy was the navy created at the time of the independence of the Empire of Brazil from the United Kingdom of Portugal, Brazil and the Algarves. It existed between 1822 and 1889 during the vigency of the constitutional monarchy. The Navy was formed almost entirely by ships, staff, organizations and doctrines proceeding from the transference of the Portuguese Royal Family in 1808. Some of its members were native-born Brazilians, who under Portugal had been forbidden to serve. Other members were Portuguese who adhered to the cause of separation and German and Irish mercenaries. Some establishments created by King João VI were used and incorporated. Under the reign of Emperor Pedro II the Navy was greatly expanded to become the fifth most powerful navy in the world and the armed force more popular and loyal to the Brazilian monarchy. The republican coup d'état in 1889, led by army men, put an end to the Imperial Navy that fell into decay until the new century.