Freakbeat is a loosely defined [1] subgenre of rock and roll music developed mainly by harder-driving British groups during the Swinging London period of the mid-to late 1960s. [2] [3] The genre bridges British Invasion R&B, beat and psychedelia. [4]

The term was coined by English music journalist Phil Smee. [5] AllMusic writes that "freakbeat" is loosely defined, but generally describes the more obscure but hard-edged artists of the British Invasion era such as the Creation, the Pretty Things, or Denny Laine (in his early solo work). [1]

Much of the material collected on Rhino Records's 2001 box-set compilation Nuggets II: Original Artyfacts from the British Empire and Beyond, 1964–1969 can be classified as freakbeat. [6] 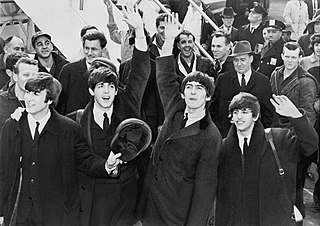 The British Invasion was a cultural phenomenon of the mid-1960s, when rock and pop music acts from the United Kingdom and other aspects of British culture became popular in the United States and significant to the rising "counterculture" on both sides of the Atlantic Ocean. Pop and rock groups such as the Beatles, the Rolling Stones, the Zombies, the Kinks, Small Faces, the Dave Clark Five, Herman's Hermits, the Hollies, the Animals, Gerry and the Pacemakers, the Searchers, the Yardbirds, the Who, and Them, as well as solo singers like Dusty Springfield, Cilla Black, Petula Clark, Tom Jones, and Donovan, were at the forefront of the "invasion".

Garage rock is a raw and energetic style of rock and roll that flourished in the mid-1960s, most notably in the United States and Canada, and has experienced a series of subsequent revivals. The style is characterized by basic chord structures played on electric guitars and other instruments, sometimes distorted through a fuzzbox, as well as often unsophisticated and occasionally aggressive lyrics and delivery. Its name derives from the perception that groups were often made up of young amateurs who rehearsed in the family garage, although many were professional.

Beat music, British beat, or Merseybeat is a popular music genre, influenced by rock and roll, skiffle, R&B, and traditional pop music, that developed in and around Liverpool in the early 1960s, before expanding to the rest of the UK and the United States by 1964. The beat style had a significant impact on popular music and youth culture, from 1960s movements such as garage rock, folk rock and psychedelic music to 1970s punk rock and 1990s Britpop.

AIP Records is a record label that was started by Greg Shaw's Bomp! Records in 1983 to continue the Pebbles series. AIP stands for "Archive International Productions". The first 10 volumes in the Pebbles series had been released by BFD Records of Kookaburra, Australia in 1979–1980 and have been kept in print by AIP for many years. Including those in the companion Highs in the Mid-Sixties series – which concentrated on American regional music scenes – there are over 50 LPs covering some 800 obscure, mostly American "Original Punk Rock" songs recorded in the mid-1960s – primarily known today as the garage rock and psychedelic rock genres – that were previously known only to a handful of collectors.

Pebbles, Volume 3, subtitled The Acid Gallery, is a compilation album featuring American underground psychedelic rock musical artists from the 1960s. It is the third installment of the Pebbles series and was released on BFD Records in 1979. The album is marked for containing among the most unusual recordings of psychedelic music.

Nuggets is a series of compilation albums by Elektra Records, continued by Rhino Records.

Planetary Pebbles is an extensive series of compilation albums that is a sub-series to the main Pebbles series, and was circulated through AIP Records. The complete series compiled over 80 songs of extremely rare and obscure psychedelic and garage rock musical artists from the 1960s that were previously nearly impossible to collect, even in the music artists' individual home countries. Planetary Pebbles is the third to branch out from the original series, with Best of: The Pebbles Series and Essential Pebbles series preceding it.

"Action Woman" is a song by the American garage rock band the Litter, written by their record producer Warren Kendrick, and first released as the group's debut single on Scotty Records in January 1967. The song also appeared on the band's first album Distortions. Although "Action Woman" never broke out on the national charts, it is now revered as a classic piece of the musical genre of garage rock. Accordingly, the composition has appeared on several compilation albums, and has been the subject of cover versions. 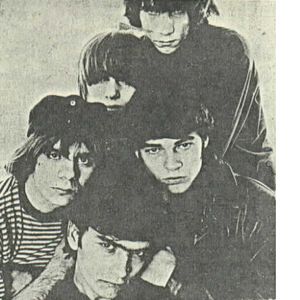 The Groupies were an American garage rock-psychedelic rock band from New York City who were active in the 1960s and are known for an innovative approach to primal blues-based rock exemplified in such songs as "Primitive". They were a popular fixture in the New York club scene and recorded for Atco Records, later venturing to Los Angeles. Due to their uncompromising stance the Groupies failed to attract a wider audience outside of their local enclaves. In recent years they have come to the attention of garage rock and psychedelic enthusiasts and their work has been included on various compilations such as the 1998 Nuggets four-CD box set, which was released on Rhino Records. In recent years their material has been re-issued on various garage rock and psychedelic compilations such as the Pebbles, Volume 10 LP and the 1998 Nuggets four-CD box set.

The Wilde Knights were an American garage rock band from Longview, Washington who active in the 1960s. They emerged from a group known as the Furys and later the Pipers VI, who recorded several frat rock records. After becoming the Wilde Knights, they wrote and recorded two songs in 1965 which were both released as singles that year and are now recognized as garage rock classics, "Beaver Patrol" and "Just Like Me", the latter of which later provided a huge hit for Paul Revere & the Raiders. In the late 1960s they evolved into Genesis, the King Biscuit Entertainers, and American Cheese, and issued records under those various names.