In mathematics, the free category or path category generated by a directed graph or quiver is the category that results from freely concatenating arrows together, whenever the target of one arrow is the source of the next.

In mathematics, a quiver is a directed graph where loops and multiple arrows between two vertices are allowed, i.e. a multidigraph. They are commonly used in representation theory: a representation V of a quiver assigns a vector space V(x) to each vertex x of the quiver and a linear map V(a) to each arrow a.

More precisely, the objects of the category are the vertices of the quiver, and the morphisms are paths between objects. Here, a path is defined as a finite sequence

is a vertex of the quiver,

is an edge of the quiver, and n ranges over the non-negative integers. For every vertex

of the quiver, there is an "empty path" which constitutes the identity morphisms of the category.

The composition operation is concatenation of paths. Given paths

The category of small categories Cat has a forgetful functor U into the quiver category Quiv:

In mathematics, in the area of category theory, a forgetful functor 'forgets' or drops some or all of the input's structure or properties 'before' mapping to the output. For an algebraic structure of a given signature, this may be expressed by curtailing the signature: the new signature is an edited form of the old one. If the signature is left as an empty list, the functor is simply to take the underlying set of a structure. Because many structures in mathematics consist of a set with an additional added structure, a forgetful functor that maps to the underlying set is the most common case.

which takes objects to vertices and morphisms to arrows. Intuitively, U "[forgets] which arrows are composites and which are identities". [2] This forgetful functor is right adjoint to the functor sending a quiver to the corresponding free category.

The free category on a quiver can be described up to isomorphism by a universal property. Let C : Quiv → Cat be the functor that takes a quiver to the free category on that quiver (as described above), let U be the forgetful functor defined above, and let G be any quiver. Then there is a graph homomorphism I : G → U(C(G)) and given any category D and any graph homomorphism F : G → U(B), there is a unique functor F' : C(G) → D such that U(F')∘I=F, i.e. the following diagram commutes: 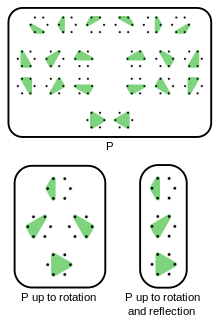 In mathematics, the phrase up to appears in discussions about the elements of a set, and the conditions under which subsets of those elements may be considered equivalent. The statement "elements a and b of set S are equivalent up to X" means that a and b are equivalent if criterion X is ignored. That is, a and b can be transformed into one another if a transform corresponding to X is applied.

In category theory, an abstract branch of mathematics, an equivalence of categories is a relation between two categories that establishes that these categories are "essentially the same". There are numerous examples of categorical equivalences from many areas of mathematics. Establishing an equivalence involves demonstrating strong similarities between the mathematical structures concerned. In some cases, these structures may appear to be unrelated at a superficial or intuitive level, making the notion fairly powerful: it creates the opportunity to "translate" theorems between different kinds of mathematical structures, knowing that the essential meaning of those theorems is preserved under the translation.

In various branches of mathematics, a useful construction is often viewed as the “most efficient solution” to a certain problem. The definition of a universal property uses the language of category theory to make this notion precise and to study it abstractly.

In mathematics, specifically category theory, adjunction is a relationship that two functors may have. Two functors that stand in this relationship are known as adjoint functors, one being the left adjoint and the other the right adjoint. Pairs of adjoint functors are ubiquitous in mathematics and often arise from constructions of "optimal solutions" to certain problems, such as the construction of a free group on a set in algebra, or the construction of the Stone-Čech compactification of a topological space in topology.

In category theory, a category is considered Cartesian closed if, roughly speaking, any morphism defined on a product of two objects can be naturally identified with a morphism defined on one of the factors. These categories are particularly important in mathematical logic and the theory of programming, in that their internal language is the simply typed lambda calculus. They are generalized by closed monoidal categories, whose internal language, linear type systems, are suitable for both quantum and classical computation.

In mathematics, the idea of a free object is one of the basic concepts of abstract algebra. It is a part of universal algebra, in the sense that it relates to all types of algebraic structure. It also has a formulation in terms of category theory, although this is in yet more abstract terms. Examples include free groups, tensor algebras, or free lattices. Informally, a free object over a set A can be thought of as being a "generic" algebraic structure over A: the only equations that hold between elements of the free object are those that follow from the defining axioms of the algebraic structure.

In category theory, a branch of mathematics, the functors between two given categories form a category, where the objects are the functors and the morphisms are natural transformations between the functors. Functor categories are of interest for two main reasons:

In mathematics, a triangulated category is a category together with the additional structure of a "translation functor" and a class of "distinguished triangles". Prominent examples are the derived category of an abelian category and the stable homotopy category of spectra, both of which carry the structure of a triangulated category in a natural fashion. The distinguished triangles generate the long exact sequences of homology; they play a role akin to that of short exact sequences in abelian categories.

In mathematics, a topos is a category that behaves like the category of sheaves of sets on a topological space. Topoi behave much like the category of sets and possess a notion of localization; they are in a sense a generalization of point-set topology. The Grothendieck topoi find applications in algebraic geometry; the more general elementary topoi are used in logic.