In category theory, string diagrams are a way of representing morphisms in monoidal categories, or more generally 2-cells in 2-categories.

is left adjoint of

and the natural transformations

are respectively the unit and the counit. The string diagrams corresponding to these natural transformations are:

String diagram of the unit

String diagram of the counit

String diagram of the identity

The string corresponding to the identity functor is drawn as a dotted line and can be omitted. The definition of an adjunction requires the following equalities:

The first one is depicted as

Diagrammatic representation of the equality

In mathematics, a Hopf algebra, named after Heinz Hopf, is a structure that is simultaneously an algebra and a coalgebra, with these structures' compatibility making it a bialgebra, and that moreover is equipped with an antiautomorphism satisfying a certain property. The representation theory of a Hopf algebra is particularly nice, since the existence of compatible comultiplication, counit, and antipode allows for the construction of tensor products of representations, trivial representations, and dual representations.

In mathematics, the idea of a free object is one of the basic concepts of abstract algebra. It is a part of universal algebra, in the sense that it relates to all types of algebraic structure. It also has a formulation in terms of category theory, although this is in yet more abstract terms. Examples include free groups, tensor algebras, or free lattices. Informally, a free object over a set A can be thought of as being a "generic" algebraic structure over A: the only equations that hold between elements of the free object are those that follow from the defining axioms of the algebraic structure.

Suppose that and are two monoidal categories. A monoidal adjunction between two lax monoidal functors

In mathematics, quasi-bialgebras are a generalization of bialgebras: they were first defined by the Ukrainian mathematician Vladimir Drinfeld in 1990. A quasi-bialgebra differs from a bialgebra by having coassociativity replaced by an invertible element which controls the non-coassociativity. One of their key properties is that the corresponding category of modules forms a tensor category.

In category theory, a branch of mathematics, compact closed categories are a general context for treating dual objects. The idea of a dual object generalizes the more familiar concept of the dual of a finite-dimensional vector space. So, the motivating example of a compact closed category is FdVect, the category having finite-dimensional vector spaces as objects and linear maps as morphisms, with tensor product as the monoidal structure. Another example is Rel, the category having sets as objects and relations as morphisms, with Cartesian monoidal structure.

In category theory, a branch of mathematics, dagger compact categories first appeared in 1989 in the work of Sergio Doplicher and John E. Roberts on the reconstruction of compact topological groups from their category of finite-dimensional continuous unitary representations. They also appeared in the work of John Baez and James Dolan as an instance of semistrict k-tuply monoidal n-categories, which describe general topological quantum field theories, for n = 1 and k = 3. They are a fundamental structure in Samson Abramsky and Bob Coecke's categorical quantum mechanics.

In mathematics, the tensor-hom adjunction is that the tensor product and hom-functor form an adjoint pair:

In category theory, a branch of mathematics, the center is a variant of the notion of the center of a monoid, group, or ring to a category. 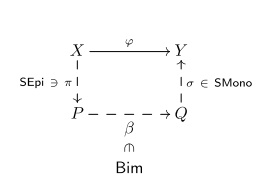