The Good Parliament is the name traditionally given to the English Parliament of 1376. Sitting in London from April 28 to July 10, it was the longest Parliament up until that time.

It took place during a time when the English court was perceived by much of the English population to be corrupt, and its traditional name was due to the sincere efforts by its members to reform the government. It had a formidable enemy, however, in John of Gaunt, fourth son of Edward III and the effective ruler of England at the time.

Parliament had not met since November 1373, 2½ years previously, because Edward III and his councilors recognised the danger of calling a parliament during a period of dissatisfaction. However, the need for funds was so pressing in 1376 that another parliament was necessary.

Once the members were assembled, they were determined to clean up the corrupt Royal Council. Peter de la Mare, a knight of the shire representing Herefordshire, had been elected as Speaker by the House of Commons, and on the first day he delivered an address criticising England's recent military failures, condemning the corruption at court, and calling for close scrutiny of the royal accounts. Richard Lyons (Warden of the Mint) and Lord Latimer, who were believed to be robbing the treasury, were called before Parliament and then imprisoned. Latimer's impeachment is the earliest recorded in Parliament. [1] The king's mistress, Alice Perrers, was called and condemned to seclusion.

John of Gaunt raised the question of the Salic law, which was the basis for the French case against Edward III's claim to the Crown of France, suggesting that the English follow the French custom, but was unable to sway the assembly to his point of view.

Meanwhile, the eldest prince of the realm, Edward the Black Prince, was dying. Having taken a house in London, he summoned both Edward III and John of Gaunt and made them swear to recognise his son, the future Richard II, as successor to Edward. Both John and the King swore to recognise Richard, and soon after Parliament summoned Richard and acknowledged him as heir to the throne. The members were swayed by the immense prestige of Prince Edward, the country's greatest military hero at the time.

Parliament then imposed a new set of councillors on the king: Edmund Mortimer, the Earl of March; William Courtenay, Bishop of London; and William of Wykeham, Bishop of Winchester.

Parliament was dissolved in July.

The following autumn, John of Gaunt attempted to undo its work. He barred the admission of the new councillors assigned to the king. He threw Peter de la Mare into prison at Nottingham. He dismissed the new council and recalled Latimer. Alice of Perrers was restored to the company of the king. John also attacked William of Wykeham.

Year 1376 (MCCCLXXVI) was a leap year starting on Tuesday of the Julian calendar. 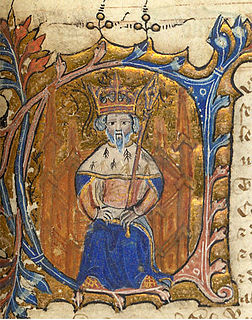 Richard II, also known as Richard of Bordeaux, was King of England from 1377 until he was deposed in 1399. He was the son of Edward, Prince of Wales, and Joan, Countess of Kent. Richard's father died in 1376, leaving Richard as heir apparent to his grandfather, King Edward III. Upon the death of Edward III, the 10-year-old Richard succeeded to the throne.

John of Gaunt, Duke of Lancaster was an English royal prince, military leader, and statesman. He was the third son of King Edward III of England, and the father of King Henry IV. Due to Gaunt's royal origin, advantageous marriages, and some generous land grants, he was one of the richest men of his era, and was an influential figure during the reigns of both his father and his nephew, Richard II. As Duke of Lancaster, he is the founder of the royal House of Lancaster, whose members would ascend the throne after his death. His birthplace, Ghent, corrupted into English as Gaunt, was the origin for his name. When he became unpopular later in life, a scurrilous rumour circulated, along with lampoons, claiming that he was actually the son of a Ghent butcher. This rumour, which infuriated him, may have been inspired by the fact that Edward III had not been present at his birth.

Sir Peter de la Mare was an English politician and Speaker of the House of Commons during the Good Parliament of 1376.

The Bad Parliament sat in England between 27 January and 2 March 1377. The initial summons for the parliament went out on 1 December 1376, and the writ dissolving it was dated 2 March 1377.

Sir Robert Belknap JP was an English judge. He is first mentioned in June 1351 in a papal register of indults issued to inhabitants of England, where he is called a "clerk, of the diocese of Salisbury" in Wiltshire. He next appears in 1353 as a member of a commission to survey Battle Abbey. This commission was followed by an extensive number of others, as evidenced by extant patent rolls, until 1388, most of which related to oyer and terminer, walliis et fossatis, gaol delivery, sewers, and the peace primarily, but not exclusively, in Kent and other parts of southeastern England. He was appointed a Justice of the Peace for Kent on 18 May 1362, and at the same time began serving as legal counsel. In July 1362 he served on a commission with William of Wykeham investigating lands granted to the Bishopric of Winchester, which Wykeham at that time held. From this point Belknap's career as a lawyer began to prosper; from 1371 he was retained as a lawyer by Westminster Abbey, and from 1374 by John of Gaunt. He was sent along with John Wycliffe and John Gilbert to Bruges in July 1374 to negotiate papal provisions; he returned in September and on 10 October he was made Chief Justice of the Common Pleas, and was knighted on 28 December of that same year. From 1375 to 1388 he served as a Trier of Petitions in Parliament, and in 1376 he was involved in investigating Richard Lyons in Essex and Sussex after complaints of embezzlement.

William Ufford, 2nd Earl of Suffolk was an English nobleman in the reigns of Edward III and Richard II. He was the son of Robert Ufford, who was created Earl of Suffolk by Edward III in 1337. William had three older brothers who all predeceased him, and in 1369 he succeeded his father.

Sir Richard Lyons (1310–1381) was a prosperous City of London merchant, financier, and property developer, who held a monopoly on the sale of sweet wine in London, during the 14th century. He was a Privy Counsellor, an Alderman of the City, and a member of the Worshipful Company of Vintners, and served as both as Sheriff of London and MP for Essex.