The Habeas Corpus Parliament, also known as the First Exclusion Parliament, was a short-lived English Parliament which assembled on 6 March 1679 (or 1678, Old Style) during the reign of Charles II of England, the third parliament of the King's reign. It is named after the Habeas Corpus Act, which it enacted in May 1679.

The parliament succeeded the long Cavalier Parliament of 1661–1678/79, which the King had dissolved. [2] Elections were held for a new parliament on various dates in February 1678/79, after which the Earl of Shaftesbury estimated that of the members of the new House of Commons one third were friends of the court, three-fifths favouring the Opposition, and the rest capable of going either way. [3] On Thursday, 6 March, the Parliament first met, and the King opened the session with a speech to both houses, in which he said:

I have done many great Things already... as the Exclusion of the Popish Lords from their Seats in Parliament; the Execution of several Men, both upon the score of the Plot, and the Murder of Sir Edmundbury Godfrey... I have disbanded as much of the Army as I could get Money to do; and I am ready to disband the rest so soon as you shall reimburse me the Money they have cost me, and will enable me to pay off the Remainder: And above all, I have commanded my Brother to absent himself from me, because I would not leave malicious Men room to say, I had not removed all Causes which could be pretended to influence me towards Popish Counsels... I have not been wanting in giving Orders for putting all the present Laws in Execution against Papists; and I am ready to join in the making such farther Laws, as may be necessary for securing the Kingdom against Popery... I must needs put you in mind how necessary it will be to have a good Strength at Sea, next Summer, since our Neighbours are making naval Preparations... I will conclude as I begun, with my earnest Desires to have this a Healing Parliament; and I do give you this Assurance that I will with my Life defend both the Protestant Religion, and the Laws of this Kingdom, and I do expect from you to be defended from the Calumny, as well as the Danger of those worst of Men, who endeavour to render me, and my Government, odious to my People. The rest I leave to the Lord Chancellor. [4]

After several days of debate and correspondence with the King, William Gregory, who had served only one year in Parliament, was elected to serve as Speaker of the House of Commons, this being agreed as a compromise between the Commons, who had wished to re-elect Edward Seymour, and the King, who objected to Seymour. [5]

On 25 March, Shaftesbury made a strong speech in the House of Lords warning of the threat of Popery and arbitrary government, and denouncing the royal administrations in the Kingdom of Scotland under John Maitland, 1st Duke of Lauderdale, and in the Kingdom of Ireland under James Butler, 1st Duke of Ormonde. He also denounced anew the Earl of Danby. Parliament resumed the pursuit of Danby's impeachment, showing even more anger against him than its Cavalier Parliament predecessor had. [3] [6]

As the parliament's name implies, its most notable achievement was the passage of the Habeas Corpus Act 1679. This was part of the struggle led by Shaftesbury to exclude the King's Roman Catholic brother James, Duke of York, from the succession to the throne, as Shaftesbury and his allies believed James would rule England arbitrarily.

On 15 May 1679, Shaftesbury's supporters in the Commons introduced the Exclusion Bill, which had the specific aim of disbarring the Duke of York from the throne. When it appeared that the bill was likely to pass, Charles used his prerogative to dissolve Parliament, which was prorogued on 27 May 1679 and did not meet again before it came to an end on 12 July 1679. [3] [7] [8]

On 22 June, in the dying days of the parliament, although some weeks after its final meeting, came the Battle of Bothwell Bridge, at which troops commanded by the King's illegitimate son James Scott, 1st Duke of Monmouth defeated a rebellion in Scotland by militant Presbyterian Covenanters against Lauderdale's rule. Following the battle, Lauderdale was replaced in Scotland by the Duke of York. [9]

Charles II was King of Scotland from 1649 until 1651, and King of England, Scotland and Ireland from the 1660 Restoration of the monarchy until his death in 1685. 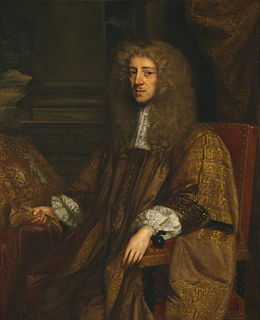 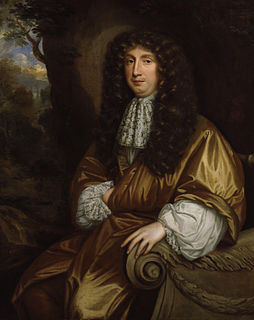 George Savile, 1st Marquess of Halifax,, was an English statesman, writer, and politician who sat in the House of Commons in 1660, and in the House of Lords after he was raised to the peerage in 1668. 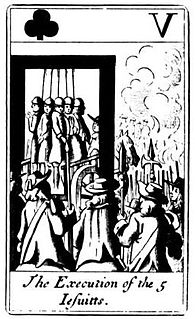 The Popish Plot was a fictitious conspiracy invented by Titus Oates that between 1678 and 1681 gripped the Kingdoms of England and Scotland in anti-Catholic hysteria. Oates alleged that there was an extensive Catholic conspiracy to assassinate Charles II, accusations that led to the executions of at least 22 men and precipitated the Exclusion Bill Crisis. Eventually, Oates's intricate web of accusations fell apart, leading to his arrest and conviction for perjury.

William Harbord, of Grafton Park, was an English diplomat and politician who sat in the House of Commons at various times between 1661 and 1690.

The March 1679 English general election returned a majority of members in favour of the Exclusion Bill. This parliament was called the Habeas Corpus Parliament after the Habeas Corpus Act, which it enacted in May, 1679 to define and strengthen the ancient prerogative writ benefitting all subjects. It was dissolved while in recess on 12 July 1679. Many members did not attend the parliament at all, so their view about Exclusion is unknown.

Thomas Dalmahoy was an English politician as the (co-)Member of Parliament for Guildford, 1664-1679. His left-handed marriage is notable in that he married the widow of his family's patron, killed at the final foray of the English Civil War, the Battle of Worcester, having served as his master of the horse attending to his travel arrangements — the patron was the Duke of Hamilton.

Prorogation in the United Kingdom is an act in United Kingdom constitutional law that is usually used to mark the end of a parliamentary session. Part of the royal prerogative, it is the name given to the period between the end of a session of the UK Parliament and the State Opening of Parliament that begins the next session. The average length of prorogation since 2000 is approximately 18 days. The parliamentary session may also be prorogued before Parliament is dissolved. The power to prorogue Parliament belongs to the Monarch, on the advice of the Privy Council. Like all prerogative powers, it is not left to the personal discretion of the monarch but is to be exercised, on the advice of the Prime Minister, according to law.