The Grumman F7F Tigercat is a heavy fighter aircraft that served with the United States Navy (USN) and United States Marine Corps (USMC) from late in World War II until 1954. It was the first twin-engine fighter to be deployed by the USN. While the Tigercat was delivered too late to see combat in World War II, it saw action as a night fighter and attack aircraft during the Korean War.

Designed initially for service on Midway-class aircraft carriers, early production F7Fs were land-based variants. The type was too large to operate from older and smaller carriers, and only a late variant (F7F-4N) was certified for carrier service.

Based on the earlier Grumman XP-50 that was eventually canceled, the company developed the XP-65 (Model 51) further for a future "convoy fighter" concept. In 1943, work on the XP-65 was terminated in favor of the design that would eventually become the F7F. [1] The contract for the prototype XF7F-1 was signed on 30 June 1941. Grumman's aim was to produce a fighter that outperformed and outgunned all existing fighter aircraft, and that had an auxiliary ground attack capability. [2]

Performance of the prototype and initial production aircraft met expectations; the F7F was one of the fastest piston-engine fighters, with a top speed significantly greater than single-engine USN aircraft – 71 mph faster than a Grumman F6F Hellcat at sea level. [3] Captain Fred Trapnell, one of the premier USN test pilots of the era, stated: "It's the best damn fighter I've ever flown." [4] The F7F was to be heavily-armed: four 20 mm cannon and four 50 caliber (0.50 in; 12.7 mm) machine guns, as well as underwing and under-fuselage hardpoints for bombs and torpedoes. This speed and firepower was bought at the cost of heavy weight and a high landing speed, but what caused the aircraft to fail carrier suitability trials was poor directional stability with only one engine operational, as well as problems with the tailhook design. [5] The initial production series was, therefore, used only from land bases by the USMC, as night fighters with APS-6 radar. [6]

While the F7F was initially also known as the Grumman Tomcat, this name was abandoned, because it was considered at the time to have excessively sexual overtones; [7] (from the 1970s, the name Tomcat became commonly associated with, and officially used by the Navy for, another Grumman design, the F-14 twin-jet carrier-based interceptor). The first production variant was the single-seat F7F-1N aircraft; after the 34th production aircraft, a second seat for a radar operator was added and these aircraft were designated F7F-2N.

A second production version, the F7F-3, was modified to correct the issues that caused the aircraft to fail carrier acceptance, and this version was again trialled on the USS Shangri-La. A wing failure on a heavy landing caused the failure of this carrier qualification as well. F7F-3 aircraft were produced in day fighter, night fighter, and photo-reconnaissance versions. [8]

The final production version, the F7F-4N, was extensively rebuilt for additional strength and stability, and did pass carrier qualification, but only 12 were built. [8]

Marine Corps night fighter squadron VMF(N)-513 flying F7F-3N Tigercats saw action in the early stages of the Korean War, flying night interdiction and fighter missions and shooting down two Polikarpov Po-2 biplanes. [9] This was the only combat use of the aircraft.

Most F7F-2Ns were modified to control drones for combat training, and these gained bubble canopies over the rear cockpit for the drone controller. An F7F-2D used for pilot transitioning also had a rear sliding, bubble canopy. [10]

In 1945, two Tigercats, serial numbers TT346 and TT349, were evaluated, but rejected by the British Royal Navy, who preferred a naval version of the de Havilland Hornet. [11]

Beginning in 1949, F7Fs were flown to the then-U.S. Navy storage facility at Naval Air Station Litchfield Park, Arizona. [12] Although the vast majority of the airframes were eventually scrapped, a number of examples were purchased as surplus. The surviving Tigercats were primarily used as water bombers to fight wildfires in the 1960s and 1970s and Sis-Q Flying Services of Santa Rosa, California, operated an F7F-3N tanker in this role until retirement in the late 1980s. 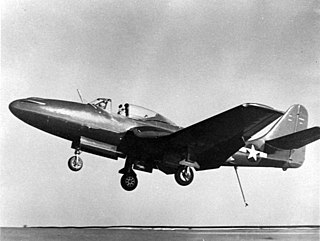 The McDonnell FH Phantom was a twinjet fighter aircraft designed and first flown during World War II for the United States Navy. The Phantom was the first purely jet-powered aircraft to land on an American aircraft carrier and the first jet deployed by the United States Marine Corps. Although with the end of the war, only 62 FH-1s were built, it helped prove the viability of carrier-based jet fighters. As McDonnell's first successful fighter, leading to the development of the follow-on F2H Banshee, which was one of the two most important naval jet fighters of the Korean War, it would also establish McDonnell as an important supplier of navy aircraft. When McDonnell chose to bring the name back with the Mach 2–class McDonnell Douglas F-4 Phantom II, it launched what would become the most versatile and widely used western combat aircraft of the Vietnam War era, adopted by the USAF and the US Navy, remaining in use with various countries to the present day. 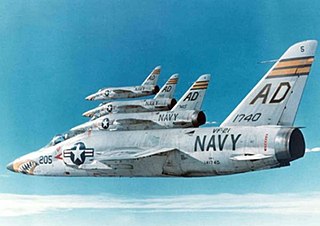 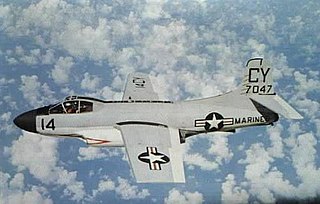 The Douglas F3D Skyknight is an American twin-engined, mid-wing jet fighter aircraft manufactured by the Douglas Aircraft Company in El Segundo, California. The F3D was designed as a carrier-based all-weather night fighter and saw service with the United States Navy and United States Marine Corps. The mission of the F3D was to search out and destroy enemy aircraft at night.

The Grumman F9F Panther is one of the United States Navy's first successful carrier-based jet fighters, as well as Grumman’s first jet fighter. A single-engined, straight-winged day fighter, it was armed with four 20 mm (0.79 in) cannons and could carry a wide assortment of air-to-ground munitions.

The Lockheed P-2 Neptune was a maritime patrol and anti-submarine warfare (ASW) aircraft. It was developed for the US Navy by Lockheed to replace the Lockheed PV-1 Ventura and PV-2 Harpoon, and was replaced in turn by the Lockheed P-3 Orion. Designed as a land-based aircraft, the Neptune never made a carrier landing, but a small number were converted and deployed as carrier-launched, stop-gap nuclear bombers that would have to land on shore or ditch. The type was successful in export, and saw service with several armed forces.

The Douglas SBD Dauntless is a World War II American naval scout plane and dive bomber that was manufactured by Douglas Aircraft from 1940 through 1944. The SBD was the United States Navy's main carrier-based scout/dive bomber from mid-1940 through mid-1944. The SBD was also flown by the United States Marine Corps, both from land air bases and aircraft carriers. The SBD is best remembered as the bomber that delivered the fatal blows to the Japanese carriers at the Battle of Midway in June 1942. The type earned its nickname "Slow But Deadly" during this period.

The Grumman F4F Wildcat is an American carrier-based fighter aircraft that began service in 1940 with the United States Navy, and the British Royal Navy where it was initially known as the Martlet. First used by the British in the North Atlantic, the Wildcat was the only effective fighter available to the United States Navy and Marine Corps in the Pacific Theater during the early part of the Second World War. The disappointing Brewster Buffalo was withdrawn in favor of the Wildcat and replaced as aircraft became available. 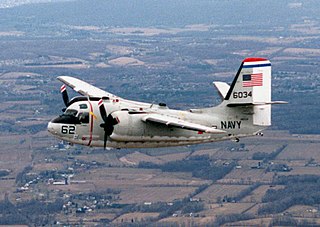 The Grumman C-1 Trader is a carrier onboard delivery (COD) variant of the Grumman S-2 Tracker. It was replaced by a similar version of the Northrop Grumman E-2 Hawkeye, the Grumman C-2 Greyhound. 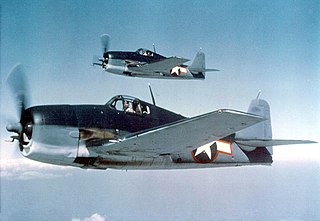 The Grumman F6F Hellcat is an American carrier-based fighter aircraft of World War II. Designed to replace the earlier F4F Wildcat and to counter the Japanese Mitsubishi A6M Zero, it was the United States Navy's dominant fighter in the second half of the Pacific War, outdueling the faster Vought F4U Corsair, which had problems with carrier landings. 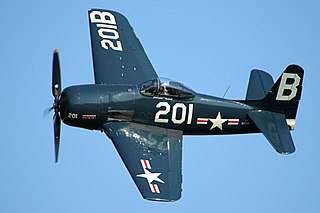 The Lockheed Ventura is a twin-engine medium bomber and patrol bomber of World War II. 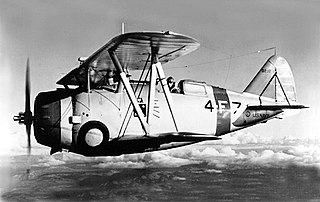 The Grumman F3F was the last American biplane fighter aircraft delivered to the United States Navy, and served between the wars. Designed as an improvement on the single-seat F2F, it entered service in 1936. It was retired from front line squadrons at the end of 1941 before it could serve in World War II, and was first replaced by the Brewster F2A Buffalo. The F3F which inherited the Leroy Grumman-designed retractable main landing gear configuration first used on the Grumman FF served as the basis for a biplane design ultimately developed into the much more successful F4F Wildcat.

The Goodyear F2G, often referred to as the "Super Corsair", is a development by the Goodyear Aircraft Company of the Vought F4U Corsair fighter aircraft. The F2G was intended as a low-altitude interceptor and was equipped with a 28-cylinder, four-row Pratt & Whitney R-4360 air-cooled radial engine. 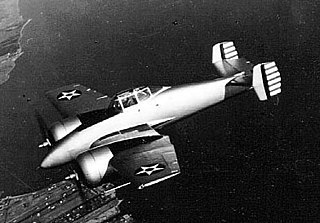 The Grumman XP-50 was a land-based development of the shipboard XF5F-1 Skyrocket fighter, entered into a United States Army Air Corps (USAAC) contest for a twin-engine heavy interceptor aircraft. The USAAC placed an order for a prototype on 25 November 1939, designating it XP-50, but it lost the competition to the Lockheed XP-49.

The Lockheed T2V SeaStar, later called the T-1 SeaStar, is a carrier-capable jet trainer for the United States Navy that entered service in May 1957. Developed from the Lockheed T-33, it was powered by one Allison J33 engine.

The Grumman AF Guardian was the first purpose-built anti-submarine warfare (ASW) carrier-based aircraft to enter service with the United States Navy. It consisted of two airframe variants, one for detection gear, the other for weapons. The Guardian remained in service until August 1955, when it was replaced by the twin-engined Grumman S-2 Tracker. The Guardian was the largest single-engine piston-powered carrier aircraft ever to see service. 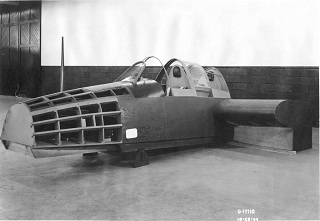 The Grumman XTSF was a proposed twin-engine torpedo scout aircraft, designed by Grumman for the United States Navy towards the end of World War II. Based on the design of the Grumman F7F Tigercat fighter, but enlarged and with the addition of a bomb bay, the XTSF was deemed too large for carrier operations, and the project was cancelled before any aircraft were built. Instead, the Navy chose to order the single-engine XTB3F, which became the successful AF Guardian.

The Columbia XJL is a large single-engined amphibious aircraft designed by Grumman Aircraft but built by the Columbia Aircraft Corp. It was intended to replace the Grumman J2F Duck but the type did not reach production status.