Task group one is based on Bluetooth technology. It defines physical layer (PHY) and Media Access Control (MAC) specification for wireless connectivity with fixed, portable and moving devices within or entering personal operating space. Standards were issued in 2002 and 2005. [1] [2]

IEEE P802.15.3a was an attempt to provide a higher speed Ultra wideband PHY enhancement amendment to IEEE 802.15.3 for applications which involve imaging and multimedia. The members of the task group were not able to come to an agreement choosing between two technology proposals, Multi-band Orthogonal Frequency Division Multiplexing (MB-OFDM) and Direct Sequence UWB (DS-UWB), backed by two different industry alliances and was withdrawn in January 2006. [6] Documents related to the development of IEEE 802.15.3a are archived on the IEEE document server. [7]

IEEE 802.15.3b-2005 amendment was released on May 5, 2006. It enhanced 802.15.3 to improve implementation and interoperability of the MAC. This amendment include many optimizations, corrected errors, clarified ambiguities, and added editorial clarifications while preserving backward compatibility. Among other changes, the amendment defined the following new features: [8]

IEEE 802.15.4-2003 (Low Rate WPAN) deals with low data rate but very long battery life (months or even years) and very low complexity. The standard defines both the physical (Layer 1) and data-link (Layer 2) layers of the OSI model. The first edition of the 802.15.4 standard was released in May 2003. Several standardized and proprietary networks (or mesh) layer protocols run over 802.15.4-based networks, including IEEE 802.15.5, ZigBee, Thread, 6LoWPAN, WirelessHART, and ISA100.11a.

IEEE 802.15.4a (formally called IEEE 802.15.4a-2007) is an amendment to IEEE 802.15.4 specifying additional physical layers (PHYs) to the original standard. The principal interest was in providing higher precision ranging and localization capability (1 meter accuracy and better), higher aggregate throughput, adding scalability to data rates, longer range, and lower power consumption and cost. The selected baselines are two optional PHYs consisting of a UWB Pulse Radio (operating in unlicensed UWB spectrum) and a Chirp Spread Spectrum (operating in unlicensed 2.4 GHz spectrum). The Pulsed UWB Radio is based on Continuous Pulsed UWB technology (see C-UWB) and will be able to deliver communications and high precision ranging. [10]

Revision and Enhancement (4b)

IEEE 802.15.4b was approved in June 2006 and was published in September 2006 as IEEE 802.15.4-2006. The IEEE 802.15 task group 4b was chartered to create a project for specific enhancements and clarifications to the IEEE 802.15.4-2003 standard, such as resolving ambiguities, reducing unnecessary complexity, increasing flexibility in security key usage, considerations for newly available frequency allocations, and others.

The IEEE 802.15 Task Group 4d was chartered to define an amendment to the 802.15.4-2006 standard. The amendment defines a new PHY and such changes to the MAC as are necessary to support a new frequency allocation (950 MHz -956 MHz) in Japan while coexisting with passive tag systems in the band.

The IEEE 802.15 Task Group 4e is chartered to define a MAC amendment to the existing standard 802.15.4-2006. The intent of this amendment is to enhance and add functionality to the 802.15.4-2006 MAC to a) better support the industrial markets and b) permit compatibility with modifications being proposed within the Chinese WPAN. Specific enhancements were made to add channel hopping and a variable time slot option compatible with ISA100.11a. These changes were approved in 2011.

Mesh networking for IEEE 802.15.1 networks is beyond scope of IEEE 802.15.5 and is carried within Bluetooth mesh working group.

In December 2011, the IEEE 802.15.6 task group approved a draft of a standard for Body Area Network (BAN) technologies. The draft was approved on 22 July 2011 by Letter Ballot to start the Sponsor Ballot process. [13] Task Group 6 was formed in November 2007 to focus on a low-power and short-range wireless standard to be optimized for devices and operation on, in, or around the human body (but not limited to humans) to serve a variety of applications including medical, consumer electronics, and personal entertainment.

IEEE P802.15.8 received IEEE Standards Board approval on 29 March 2012 to form a Task Group to develop a standard for Peer Aware Communications (PAC) optimized for peer to peer and infrastructureless communications with fully distributed coordination operating in bands below 11 GHz. The proposed standard is targeting data rates greater than 100 kbit/s with scalable data rates up to 10 Mbit/s. Features of the proposed include:

The draft standard is under development, more information can be found on the IEEE 802.15 Task Group 8 web page.

While IEEE Std 802.15.4 has always supported datagram security, it has not provided a mechanism for establishing the keys used by this feature. Lack of key management support in IEEE Std 802.15.4 can result in weak keys, which is a common avenue for attacking the security system. Adding KMP support is critical to a proper security framework. Some of the existing KMPs that it may address are IETF's PANA, HIP, IKEv2, IEEE Std 802.1X, and 4-Way-Handshake.

The draft recommended practice is under development, more information can be found on the IEEE 802.15 web page.

IEEE P802.15.10 received IEEE Standards Board approval on 23 August 2013 to form a Task Group to develop a recommended practice for routing packets in dynamically changing 802.15.4 wireless networks (changes on the order of a minute time frame), with minimal impact to route handling. The goal is to extend the coverage area as the number of nodes increase. [16] The route related capabilities that the recommended practice will provide include the following:

The draft recommended practice is under development; more information can be found on the IEEE 802.15.10 web page.

The IEEE P802.15 Wireless Next Generation Standing Committee (SCwng) is chartered to facilitate and stimulate presentations and discussions on new wireless related technologies that may be subject for new 802.15 standardization projects or to address the whole 802.15 work group with issues or concerns with techniques or technologies. [17] 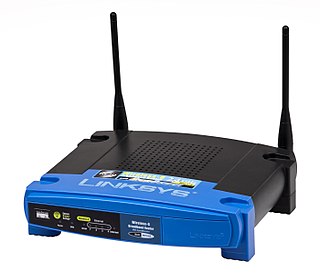 IEEE 802.11 is part of the IEEE 802 set of LAN protocols, and specifies the set of media access control (MAC) and physical layer (PHY) protocols for implementing wireless local area network (WLAN) Wi-Fi computer communication in various frequencies, including but not limited to 2.4 GHz, 5 GHz, and 60 GHz frequency bands.

IEEE 802.3 is a working group and a collection of Institute of Electrical and Electronics Engineers (IEEE) standards produced by the working group defining the physical layer and data link layer's media access control (MAC) of wired Ethernet. This is generally a local area network (LAN) technology with some wide area network (WAN) applications. Physical connections are made between nodes and/or infrastructure devices by various types of copper or fiber cable.

Ultra-wideband is a radio technology that can use a very low energy level for short-range, high-bandwidth communications over a large portion of the radio spectrum. UWB has traditional applications in non-cooperative radar imaging. Most recent applications target sensor data collection, precision locating and tracking applications.

IEEE 802.15.4 is a technical standard which defines the operation of low-rate wireless personal area networks (LR-WPANs). It specifies the physical layer and media access control for LR-WPANs, and is maintained by the IEEE 802.15 working group, which defined the standard in 2003. It is the basis for the Zigbee, ISA100.11a, WirelessHART, MiWi, 6LoWPAN, Thread and SNAP specifications, each of which further extends the standard by developing the upper layers which are not defined in IEEE 802.15.4. In particular, 6LoWPAN defines a binding for the IPv6 version of the Internet Protocol (IP) over WPANs, and is itself used by upper layers like Thread. 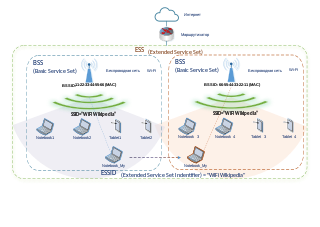 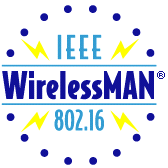 IEEE 802.11n-2009, commonly shortened to 802.11n, is a wireless-networking standard that uses multiple antennas to increase data rates. The Wi-Fi Alliance has also retroactively labelled the technology for the standard as Wi-Fi 4. It standardized support for multiple-input multiple-output, frame aggregation, and security improvements, among other features, and can be used in the 2.4 GHz or 5 GHz frequency bands.

The WiMedia Alliance was a non-profit industry trade group that promoted the adoption, regulation, standardization and multi-vendor interoperability of ultra-wideband (UWB) technologies. It existed from about 2002 through 2009.

FM-UWB is a modulation scheme using double FM: low-modulation index digital FSK followed by high-modulation index analog FM to create a constant envelope UWB signal. FDMA techniques at the subcarrier level may be exploited to accommodate multiple users. The system is intended for low and medium bit rate, and short-range WPAN systems. The technology, developed at CSEM, is paving the way for true low-power LDR-UWB communication devices. FM-UWB is an optional mode in the IEEE802.15.6 Body Area Network (BAN) standard.

Nivis, LLC is a company that designs and manufactures wireless sensor networks for smart grid and industrial process automation. Target applications include process monitoring, environmental monitoring, power management, security, and the internet of things. The company is headquartered in Atlanta, Georgia, with additional offices in Romania, where much of its technology is developed. The company’s product portfolio consists of standards-based wireless communications systems, including radio nodes, routers, management software and a software stack for native communications. Nivis hardware is operated by open source software.