Jack Wilson McConnell, Baron McConnell of Glenscorrodale, PC (born 30 June 1960) is a Scottish politician and a Labour life peer in the House of Lords. He was the First Minister of Scotland from 2001 to 2007. He was the Member of the Scottish Parliament for Motherwell and Wishaw from 1999 to 2011.

McConnell became an MSP in the inaugural elections to the Scottish Parliament in 1999, later holding the positions of Finance Minister, and Education Minister. He was elected First Minister following the resignation of his predecessor Henry McLeish, and led the Scottish Labour Party to its second election victory in the 2003 Election.

After losing office as First Minister of Scotland, McConnell became a member of the House of Lords of the United Kingdom. He made a commitment to continuing his work to tackle poverty in Africa and to develop the relationship between Scotland and Malawi. [1]

McConnell was born in Irvine, Ayrshire brought up on a sheep farm near Lamlash on the Isle of Arran, and educated at Arran High School. [2] He went on to study at the University of Stirling, graduating with a BSc Dip Ed. He was also President of the Students' Association. [3] After graduating in 1983 he began work as a mathematics teacher at Lornshill Academy in Alloa, Clackmannanshire (a position he retained throughout his subsequent council service).

McConnell's political career began with his election to Stirling District Council. McConnell served on the council for eight years, while retaining his job at Lornshill. He served as Treasurer from 1988 until 1992, and was the Leader of the council from 1990 to 1992. McConnell became the General Secretary of the Scottish Labour Party in 1992.[ citation needed ]

As a strong proponent of Scottish devolution, McConnell helped push for reform. Between 1989 and 1998 he was a member of the Scottish Constitutional Convention, where he was playing an important role in the creation of the Scotland Act, which created a Scottish Parliament for the first time.[ citation needed ]

He was appointed immediately by Donald Dewar, the then First Minister, to the post of Minister of Finance. As Finance Minister one of his primary jobs was to establish the budgeting procedures for the new Scottish government, which included consulting the public on budget priorities. As Minister responsible for External Relations he established Concordats with the UK Government and opened Scotland House in Brussels.[ citation needed ]

McConnell was elected an MSP in the first Scottish Parliament elections in 1999. He was appointed Minister for Finance in the new Scottish Executive by then First Minister Donald Dewar. One of his first moves as Finance Minister was to establish the budgeting procedures for the new Scottish Executive, including publishing a consultation document asking the public and MSPs how the budget should be spent. His department also passed the Public Finance and Accountability (Scotland) Act 2000 through Parliament, which set out the finance and auditing procedures of the Executive. [4]

On 11 October 2000, Donald Dewar died of a brain haemorrhage. After the Labour leadership intervened to stop the Enterprise Minister Henry McLeish being appointed Dewar's successor without a vote, McConnell stood in the leadership contest. The election was held on Saturday 21 October, only 72 hours after Dewar's funeral, and the surprise result saw McConnell defeated with 36 votes to Henry McLeish's 44 votes.[ citation needed ]

McLeish appointed him Minister for Education, Europe and External Affairs. [5] Some analysts considered this post to be a "poisoned chalice", as he would be required to resolve both a crisis in the Scottish Qualifications Authority over exam marking, and pay disputes with the teaching unions. [6]

In August 2000, prior to Jack McConnell's appointment as Education Minister, Scotland's national exams system was plunged into chaos when 5,000 students got the wrong exam results. Immediately following his appointment as Education Minister Jack McConnell appointed a new board for the Scottish Qualifications Authority (SQA) and introduced significant changes to the way the agency worked. The marking of the 2001 exams was a success. He introduced a new pay and conditions package for Scottish teachers and the largest ever investment in schools buildings. He also established the Scottish government's first external relations and European strategy.[ citation needed ]

This was viewed as a particularly tricky post due to thousands of students getting the wrong exam results and pay disputes with teachers' trade unions in the preceding year. He negotiated a new pay and conditions package for Scottish teachers and invested heavily in improving school infrastructure.[ citation needed ]

He reformed the Scottish Qualifications Authority and appointed a new board, and the following year there was no problem with exam results. In terms of European and External Affairs, he created the first External Relations and European Affairs strategy on how to influence and implement EU policies and promote Scotland abroad.[ citation needed ]

Henry McLeish resigned as First Minister on 8 November 2001 over the Officegate Scandal, regarding the sub let of his constituency office. In the resulting search for a leader, McConnell was seen by many political analysts as the likely successor. [7]

McConnell quickly emerged as the only candidate, and was elected First Minister by the Parliament on 22 November 2001 and formally appointed into office by Queen Elizabeth II on 26 November 2001. As a result of his becoming First Minister, he was appointed to the Privy Council. [8] [9]

A few days after his appointment, on 27 November 2001, McConnell carried out a reshuffle of the Cabinet, axing four Ministers: Angus MacKay, Sarah Boyack, Tom McCabe and Jackie Baillie, and demoting Susan Deacon (she later resigned rather than accept the new post offered to her). [10]

In February 2002, Scotland joined forces with the Republic of Ireland in a bid to host the 2008 European Football Championship. [11] McConnell was initially unconvinced that it was worth spending around £100 million on the tournament, but he later put his support behind the joint bid with the Irish. Although the bid lost out to Austria/Switzerland, McConnell later supported other attempts to land major supporting events including London's successful bid for the 2012 Olympic Games [12] and Glasgow's bid for the 2014 Commonwealth Games. [13] In December 2002, McConnell launched his government's campaign against sectarianism. [14]

McConnell was re elected MSP for Motherwell and Wishaw at the Scottish Parliament elections. The Labour Party won 50 seats, the largest number, and formed a coalition with the Liberal Democrat Party which won 17 seats. On 15 May, McConnell was re appointed First Minister of Scotland and on the same day the Scottish government published A Partnership for a Better Scotland which set out the government's priorities for the four-year term.[ citation needed ]

The Scottish Parliament elections of 3 May 2007 saw McConnell re elected as the MSP for Motherwell and Wishaw with a majority of 5,938 votes, representing 48% of the vote with a turnout of 50.3%. The Labour Party was defeated by the SNP with the SNP winning 47 seats to Labour's 46, leaving the SNP short of an overall majority in the Parliament. [15]

On 15 August 2007, McConnell announced his intention to resign as Scottish Labour Leader. [16] He continued to sit as the MSP for Motherwell and Wishaw until the 2011 Election. On 28 May 2010, it was announced that McConnell would be made a life peer and enter the House of Lords as a working peer on behalf of the Labour Party. [17]

On 28 June 2010, he was created a life peer as Baron McConnell of Glenscorrodale, of the Isle of Arran in Ayrshire and Arran, [18] and was introduced in the House of Lords the same day. [19] In August 2010 he announced that he would not be seeking re-election to the Scottish Parliament. [20]

McConnell was widely predicted to take the position of British High Commissioner to Malawi when it became vacant in 2009, having taken an interest in the development of the country during his time as First Minister. In August 2007, he was appointed an adviser to the Clinton Hunter Development Initiative in Malawi and Rwanda, and in October 2008, he was appointed by Gordon Brown as the Prime Minister's Special Representative on Conflict Resolution Mechanisms, a position which ceased following the 2010 General election.[ citation needed ]

He is a UK Ambassador for Action for Children; a Fellow of the 48 Group Club, which promotes relationships between the United Kingdom and China and an Ambassador for Pump Aid. On 8 March 2012, Optical Express announced the appointment of Lord McConnell of Glenscorrodale joining the Board as non executive director. [21] He was a non executive director at DCM (Optical Holdings) from 2011 to 2015. [22] As of 30 November 2018 McConnell holds the position of Chancellor at the University of Stirling. [23]

In November 2001, as he prepared to succeed Henry McLeish, he told a media conference some details regarding an extra marital affair that he had been involved in seven years previously. [24] McConnell is married to Scottish cultural administrator and current Chief Executive Officer of Glasgow City Council quango Glasgow Life, Bridget McConnell.

Donald Campbell Dewar was a Scottish Labour Party politician, the inaugural First Minister of Scotland and an advocate of Scottish devolution.

Henry Baird McLeish is a Scottish Labour Party politician, author and academic who briefly served as the First Minister of Scotland from 2000 until 2001, when he had to resign following a financial scandal, the first major scandal to face the Scottish Parliament since its reincarnation. 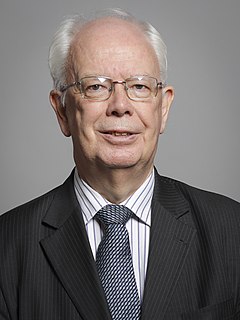 Susan Catherine Deacon is a Scottish public figure who has held leadership roles across the private, public and third sectors, and in academia and national politics.

Catherine Mary Jamieson is a Scottish Labour and Co-operative politician. She served as Member of the Scottish Parliament (MSP) for Carrick, Cumnock and Doon Valley from 1999 to 2011 and then Member of Parliament (MP) for Kilmarnock and Loudoun from 2010 to 2015.

Andy Kerr is a Scottish Labour politician and former Member of the Scottish Parliament for East Kilbride constituency, a seat which he held from 1999 until 2011.

Thomas McCabe was a Scottish Labour Party politician. He was Minister for Finance in the Scottish Executive, and was Member of the Scottish Parliament for Hamilton South until March 2011.

Scottish Labour is a democratic-socialist political party in Scotland. It is a semi-autonomous section of the national Labour Party. 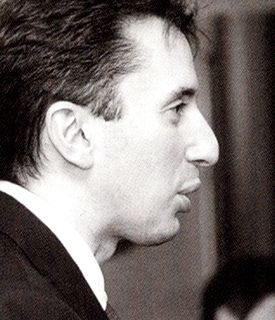 Angus MacKay is a Scottish Labour politician, and was Member of the Scottish Parliament for Edinburgh South constituency from 1999 to 2003.

David Whitton is a Scottish journalist, Labour party politician and former MSP. He was elected to the Scottish Parliament for Strathkelvin and Bearsden in 2007, defeating the incumbent Independent MSP Jean Turner, and losing the seat at the 2011 election to Fiona McLeod of the Scottish National Party. 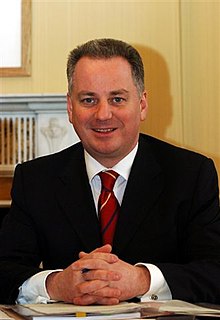 Events from the year 2000 in Scotland.

The Organisation of Scottish Labour is a body established under the national rules of the UK Labour Party.

Marion Fellows is a Scottish National Party (SNP) politician. She was elected at the general election in May 2015 as the Member of Parliament (MP) for Motherwell and Wishaw.