The keel-billed toucan (Ramphastos sulfuratus), also known as sulfur-breasted toucan or rainbow-billed toucan, is a colorful Latin American member of the toucan family. It is the national bird of Belize. [2] The species is found in tropical jungles from southern Mexico to Colombia. It is an omnivorous forest bird that feeds on fruits, seeds, insects, invertebrates, lizards, snakes, and small birds and their eggs. [3]

The plumage of the keel-billed toucan is mainly black with a yellow neck and chest. Molting occurs once per year. [7] It has blue feet and red feathers at the tip of its tail. The bill is mainly green with a red tip and orange sides.

Keel-billed toucans have zygodactyl feet (or feet with toes facing in different directions) – two toes face forward and two face back. Because toucans spend a large portion of time in the trees, this helps the birds to stay on the branches of the trees and jump from one branch to another.

The keel-billed toucan can be found from Southern Mexico to Venezuela and Colombia. It roosts in the canopies of tropical, subtropical, and lowland rainforests, up to altitudes of 1,900 m (6,200 ft). [8] It roosts in holes in trees, [7] often with several other toucans. This can be very cramped, so the birds tuck their tails and beaks under their bodies to conserve space while sleeping. Adding to the lack of space, the bottoms of the holes are often covered with pits from the fruit the toucans have eaten. [7]

Like many toucans, keel-billed toucans are very social birds, rarely seen alone. They fly in small flocks of approximately six to twelve individuals through lowland rainforests. Their flight is slow and undulating, consisting of rapid wing beats (six to ten), then a glide with the bird's beak extending forward and dipping downward as though pulling the rest of the bird. [7] Their feet are drawn up forward in flight. The flight distances are typically short. [7] They live together in groups, often sharing cramped living quarters of holes in trees. There is a family structure within the group. Birds often "duel" with each other using their bills, and throw fruit into each other's mouths. They 'play ball', one throwing a fruit in the air and a second seizing it. [7]

The female keel-billed toucan will lay 1–4 white eggs in a natural or already-made tree cavity. [9] The male and female share in the caring of the eggs, both taking turns incubating. [7] The eggs hatch approximately 15–20 days after being laid. After hatching, the male and female again take turns feeding the chicks. When the chicks hatch, they have no feathers, and have their eyes closed for approximately 3 weeks. The chicks have adequately formed heel pads, which assist on the pit-covered bottom of the nest. [7] The chicks stay in their nest for approximately eight to nine weeks while their bills develop fully and they are ready to fledge from the nest.

The diet of keel-billed toucans consists mostly of a wide range of fruit, [11] but may also include insects, eggs, nestlings and lizards. The bill, surprisingly dexterous, allows this toucan to utilize a large variety of fruit that might not otherwise be reached. When eating the fruit, it uses its bill to dissect the fruit, and then tosses its head back to swallow the fruit whole.

The keel-billed toucan is sometimes kept in captivity, but it requires a high-fruit diet and is sensitive to hemochromatosis (an iron storage disease). [12]

Able to utilize human-altered habitat to some extent, [10] this widespread bird is considered to be a Species of Least Concern by the IUCN. [1] However, they are still threatened by hunting for their meat and beaks, and toucan populations are on a decreasing trend.

The channel-billed toucan is a near-passerine bird in the family Ramphastidae found in Trinidad and in tropical South America as far south as southern Brazil and central Bolivia. 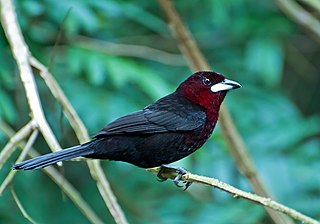 The silver-beaked tanager is a medium-sized passerine bird. This tanager is a resident breeder in South America from eastern Colombia and Venezuela south to Paraguay and central Brazil, Perú and on Trinidad. It is common and conspicuous.

The red-bellied macaw, also known as Guacamaya Manilata, is a medium-sized, mostly green South American parrot, a member of a group of large Neotropical parrots known as macaws. It is the largest of what are commonly called "mini-macaws". The belly has a large maroon patch which gives the species its name. 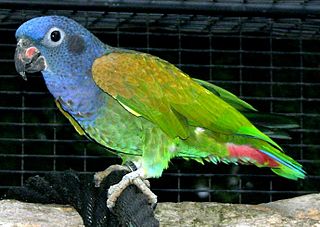 The blue-headed parrot, also known as the blue-headed pionus is a medium-sized parrot of about 27 cm in length. The body is mostly green, with a blue head and neck, and red undertail coverts. It is a resident in tropical and subtropical South America and southern Central America, from Costa Rica, Venezuela and Trinidad south to Bolivia and Brazil.

The toco toucan, also known as the common toucan or giant toucan, is the largest and probably the best known species in the toucan family. It is found in semi-open habitats throughout a large part of central and eastern South America. It is a common attraction in zoos.

The chestnut-mandibled toucan or Swainson's toucan is a subspecies of the yellow-throated toucan which breeds from eastern Honduras to northern Colombia to western Ecuador.

The emerald toucanet or northern emerald toucanet is a species of near-passerine bird in the family Ramphastidae occurring in mountainous regions of Mexico and Central America. Several taxa formerly included within this species have now been re-classified into separate species of their own.

The white-throated toucan is a near-passerine bird in the family Ramphastidae found in South America throughout the Amazon Basin including the adjacent Tocantins and Araguaia River drainage. It prefers tropical humid forest, but also occurs in woodland and locally in riverine forest within cerrado. This bird can be found in Bolivia in the Beni Departement, notably in the city of Riberalta and in the close by Aquicuana Reserve.

The collared aracari or collared araçari is a toucan, a near-passerine bird. It breeds from southern Mexico to Panama; also Ecuador, Colombia, Venezuela and Costa Rica. 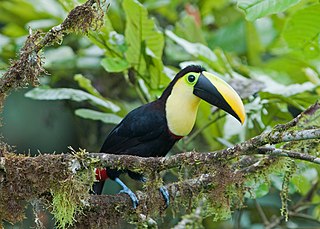 Ramphastos is a genus of toucans, tropical and subtropical near passerine birds from Mexico, and Central and South America, which are brightly marked and have enormous, often colourful, bills.

The toucan barbet is a barbet native to western Ecuador and Colombia. Along with the prong-billed barbet, it forms the family Semnornithidae, and is closely related to the toucans. It is a medium-sized barbet with a robust yellow bill. It has striking plumage, having a black head with grey throat and nape, red breast and upper belly, yellow lower belly and grey wings and tail. 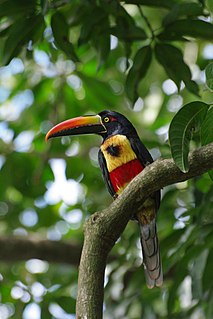 The fiery-billed aracari or fiery-billed araçari is a toucan, a near-passerine bird. It breeds only on the Pacific slopes of southern Costa Rica and western Panama. The binomial commemorates the German naturalist Alexander von Frantzius. 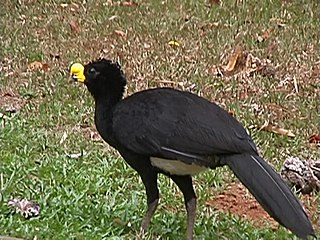 The great curassow is a large, pheasant-like bird from the Neotropical rainforests, its range extending from eastern Mexico, through Central America to western Colombia and northwestern Ecuador. Male birds are black with curly crests and yellow beaks; females come in three colour morphs, barred, rufous and black. These birds form small groups, foraging mainly on the ground for fruits and arthropods, and the occasional small vertebrate, but they roost and nest in trees. This species is monogamous, the male usually building the rather small nest of leaves in which two eggs are laid. This species is threatened by loss of habitat and hunting, and the International Union for Conservation of Nature has rated its conservation status as "vulnerable".

The yellow-throated toucan is a large toucan in the family Ramphastidae found in Central and northern South America.

The Choco toucan is a near-passerine bird in the family Ramphastidae found in humid lowland and foothill forests on the Pacific slope of Colombia and Ecuador. Within its range, extensive habitat destruction is taking place, but it remains fairly common locally.

The green-billed toucan, or red-breasted toucan, is a near-passerine bird in the family Ramphastidae found in southern and eastern Brazil, Pantanal of Bolivia, eastern Paraguay and far north-eastern Argentina. It is primarily found in the Atlantic Forest. Overall, it is fairly common, and therefore considered to be of least concern by IUCN.

The yellow-billed cacique is a species of cacique in the family Icteridae. It is monotypic within the genus Amblycercus. There is some question as to whether or not it is a true cacique. 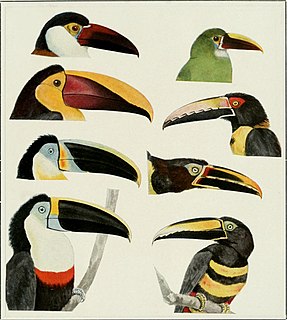 Toucans are members of the Neotropical near passerine bird family Ramphastidae. The Ramphastidae are most closely related to the American barbets. They are brightly marked and have large, often-colorful bills. The family includes five genera and over forty different species. 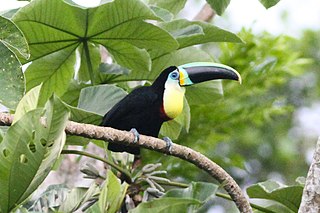 The citron-throated toucan is a species of bird in the family Ramphastidae found in northern Colombia and north-western Venezuela. It is around 48cm long and has black upper parts with yellow rump, throat, and breast pale lemon-yellow.

Cymbopetalum mayanum is a species of plant in family Annonaceae. The specific epithet mayanum refers to the Mayan region in which it is indigenous, specifically the Atlantic lowlands of Guatemala and Honduras. It grows as a tree. It is endangered due to habitat loss from agriculture.