LCC has been criticized for lacking a sound theoretical basis; many of the classification decisions were driven by the practical needs of that library rather than epistemological considerations. [3] Although it divides subjects into broad categories, it is essentially enumerative in nature. That is, it provides a guide to the books actually in one library's collections, not a classification of the world.

The central core of the modern Library of Congress was formed from books sold to the government by Thomas Jefferson after the original collection was razed by the British in the War of 1812. As a result, the original classification system used by the library was of his own invention. However, by the end of the nineteenth century, the collection had grown to over a millions volumes and his system was deemed too unwieldy. [4]

John Russell Young, the seventh Librarian of Congress, hired James Hanson and Charles Martel in 1897, [5] who began the development of a new classification system that would more accurately describe the collections the library held. Young's tenure as Librarian ended with his death in 1899, and his successor, Herbert Putnam, continued to implement the updates to the catalog through his long stay in the office. [6] By the time he departed from his post in 1939, all the classes except K (Law) were well developed. [4]

In creating their classification system, Hanson and Martel evaluated several systems already in existence, including the Dewey Decimal System, Charles Ammi Cutter's Cutter Expansive Classification, the Index Medius, [7] and the Putnam Classification System (developed while Putnam was head librarian at the Minneapolis Public Library). [8] The one closest to their needs was Cutter's; however, he died before the completion of his system. [9] Hanson and Martel thus decided to develop their own unique system, strongly based on this ideas. They published their first outline of the classification scheme in 1904. [4] Development of the classes continued throughout the twentieth century. The last class to be developed was K (Law): the first K schedule was published in 1969 and not being completed until the 2004 publication of KB. [4]

From 1996 onwards, the LCC schedules were available online, and since 2013, there have been no new print editions of the classification system. All updates are now distributed by the Library's Cataloging Distribution Service entirely online. [4]

LCC divides all knowledge into twenty-one basic classes, each given a single letter of the alphabet as an identifier. The vast majority of these classes are divided further into two and three level sub-classes. [10] With these sub-classes, numerical ranges are assigned to topics, going from more general to more specific. Unlike in the Dewey Decimal Classification, where the numbers assigned to a topic iterate throughout the system (e.g., the ".05" tag indicated a periodical publication on the topic), the LCC numerical ranges are strictly hierarchal, only corresponding to their level on the outline. LCC is enumerative, meaning that it lists all the classes in officially published schedules, which are updated as needed by the Library of Congress. [10]

After the range of range of numbers making up the topical division, call numbers often also include one or more Cutter numbers, modeled after the unfinished Cutter Expansive Classification index. The full LCC schedules contain tables that describe Cutter numbers for certain types of media, collections of work, and geographical areas. [4] Cutter numbers also can take the form of an author-specific code, containing a letter and several numbers corresponding to the author's last name. This serves to further distinguish publications and nominally alphabetize volumes within a topic section. The final component of a typical LCC call-number is the publication year, in full. [11] Library collections can add modifiers to distinguish specific volumes, such as "Copy 1." [1]

One variation from the original LCC system is the National Library of Medicine classification system (NLM), which uses the initial letters W and QS–QZ, which are not used by LCC. Some libraries use NLM in conjunction with LCC, eschewing LCC's R, QM, and QP, which overlap with NLM's schema. [12] [13] Another is the Canadian Universities and the Canadian National Library using FC for Canadian History, a subclass that LCC has not officially adopted, but which it has agreed not to use for anything else. [14] [15]

Together with the Dewey Decimal System (DDC), LCC make up the two main classification system used in US libraries. [1] LCC is favored by large academic and research libraries.

Systems of classification can be evaluated on several metrics, including expressiveness (the ability of the numeration system to express the hierarchal and correlative relationships between topics), hospitality (the ability of the system to accommodate new subjects), and brevity (length of call numbers). [4] While LCC is significantly less expressive than DDC, it is extremely hospitable, mainly in the fact that five class (I, O, W, X, and Y) lack any assignment to topics. [9] LCC call numbers also tend to be shorter than those in DDC.

The main difference between DDC and LCC is their approach to classifying. Dewey's system is a comprehensive classification to all topics, with no regard to the actual collections a library might hold. While this has allows it to be successfully adapted into more modern classification systems for use outside of libraries, such as the Universal Decimal Classification (UDC), [16] it does make it more unwieldy for large or specialized collections. On the other hand, Hanson and Martel designed LCC specifically for library use, which means while it does not completely enumerate the world, it does more reflect what books a library might hold. [3]

Because LCC was designed around the collections of the Library of Congress, it has an American, European, and Christian bias, as reflected mainly in the earlier developed schedules of D (World History), E and F (History of the Americas), and B (Philosophy, Psychology, Religion). On the other hand, the later-developed K (Law) gives fairly even weight to global law. [10] Today, the various schedules are maintained and revised by the Library's Policy and Standards Division, in conjunction with experts in each field. However, updated various schedules with classification biases is generally assumed to be impractical job to the massive workload that would result in, [4] especially as the "discipline" based classes of LCC have been entrenched in the average library user's mind. [17]

Like all classification systems, LCC struggles with catering to interdisciplinary scholars and topics, as ultimately, a book can only be shelved in a single location. [17] Additionally, LCC has a problem with "othering" marginalized groups, making works related to or authored by members of these groups particularly difficult to locate. [17] This is not a new issue, and libraries with more specialized collections about minority groups or issues sometimes eschew LCC, [17] with one example alternative classification being the Harvard–Yenching Classification, specifically developed for Chinese language materials.

The Bliss bibliographic classification (BC) is a library classification system that was created by Henry E. Bliss (1870–1955) and published in four volumes between 1940 and 1953. Although originally devised in the United States, it was more commonly adopted by British libraries. A second edition of the system (BC2) has been in ongoing development in Britain since 1977.

The Dewey Decimal Classification (DDC), colloquially known as the Dewey Decimal System, is a proprietary library classification system which allows new books to be added to a library in their appropriate location based on subject. It was first published in the United States by Melvil Dewey in 1876. Originally described in a 44-page pamphlet, it has been expanded to multiple volumes and revised through 23 major editions, the latest printed in 2011. It is also available in an abridged version suitable for smaller libraries. OCLC, a non-profit cooperative that serves libraries, currently maintains the system and licenses online access to WebDewey, a continuously updated version for catalogers.

The Universal Decimal Classification (UDC) is a bibliographic and library classification representing the systematic arrangement of all branches of human knowledge organized as a coherent system in which knowledge fields are related and inter-linked. The UDC is an analytico-synthetic and faceted classification system featuring detailed vocabulary and syntax that enables powerful content indexing and information retrieval in large collections. Since 1991, the UDC has been owned and managed by the UDC Consortium, a non-profit international association of publishers with headquarters in The Hague, Netherlands. 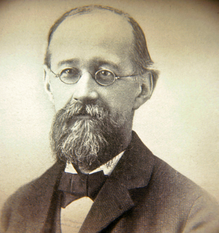 Charles Ammi Cutter was an American librarian. In the 1850s and 1860s he assisted with the re-cataloging of the Harvard College library, producing America's first public card catalog. The card system proved more flexible for librarians and far more useful to patrons than the old method of entering titles in chronological order in large books. In 1868 he joined the Boston Athenaeum, making its card catalog an international model. Cutter promoted centralized cataloging of books, which became the standard practice at the Library of Congress. He was elected to leadership positions in numerous library organizations at the local and national level. Cutter is remembered for the Cutter Expansive Classification, his system of giving standardized classification numbers to each book, and arranging them on shelves by that number so that books on similar topics would be shelved together.

This is a conversion chart showing how the Dewey Decimal and Library of Congress Classification systems organize resources by concept, in part for the purpose of assigning call numbers. These two systems account for over 95% of the classification in United States libraries, and are used widely around the world.

The Nippon Decimal Classification is a system of library classification developed for mainly Japanese-language books maintained and revised by the Japan Library Association since 1948. Originally developed in 1929 by Kiyoshi Mori, the 10th and latest edition of this system was published in 2014. The decimal notation system is similar to the Dewey Decimal System, and the order of main classes is inspired from the Cutter Expansive Classification. The system is based upon using a three digit number to classify subjects, where more digits can be added if necessary and a decimal point is used to separate the third and fourth digit. The first division level is called a class, the second level is called a division, and the third level is called a section. Each '1-9' digit is used to represent a specific category, with the digit '0' being used to represent general works.

Markham Public Library (MPL) is a library system operated by the municipal government of the City of Markham in Canada. There are eight branches in the city, serving about 250,000 residents in Markham. The libraries are managed by the Administration Centre, located at 6031 Highway 7. 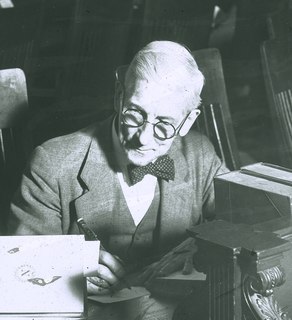 Charles Martel was an American librarian responsible for the creation of the Library of Congress Classification; he is often considered to be one of the most influential librarians in American library history.

The Moys Classification Scheme is a system of library classification for legal materials. It was designed by Betty Moys and first published in 1968. It is used primarily in law libraries in many common law jurisdictions such as Canada, Australia, New Zealand, and the United Kingdom.

The British National Bibliography (BNB) was established at the British Museum in 1949 to publish a list of the books, journals and serials that are published in the United Kingdom and Republic of Ireland. It also includes information on forthcoming titles. This is the single most comprehensive listing of UK titles. UK and Irish publishers are obliged by legal deposit to send a copy of all new publications, including serial titles, to the BNB for listing. The BNB publishes the list weekly in electronic form: the last printed weekly list appeared in December 2011.

Wikisource has original text related to this article:
Library of Congress Classification