This is a list of original Xbox games that are compatible with the System Link feature, both released and unreleased. Platinum Hits releases may not system link with non-platinum hits releases due to some Platinum Hits releases having 'Title Updates' that will not link with older versions, and some games will not link with non updated versions if they have 'Title Updates' applied, either through XBL or a softmod. For Xbox 360 games, see List of Xbox 360 System Link games. Some games allow more players if one Xbox acts as a Dedicated Server. A Dedicated Server means one of the Xbox's hosts the others and you can't play on the host Xbox.

Karaoke Revolution and its many sequels are video games for the PlayStation 2, PlayStation 3, GameCube, Wii, Xbox, and Xbox 360, developed by Harmonix and Blitz Games and published by Konami in its Bemani line of music games. The Original Concept for Karaoke Revolution was created by Scott Hawkins and Sneaky Rabbit Studios. Technology and concepts from the game were subsequently incorporated into Harmonix's game Rock Band.

Homebrew, when applied to video games, refers to games produced by hobbyists for proprietary hardware platforms that are not intended to be user-programmable, primarily video game consoles. These often use storage formats that make distribution difficult. Many systems have hardware restrictions to prevent unauthorized development. A non-professional developer for a system intended to be user-programmable, like the Commodore 64, is simply called a hobbyist. 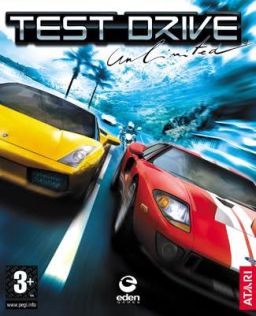 Test Drive Unlimited is an open world racing video game developed by Eden Games and published by Atari for Xbox 360 and Microsoft Windows. Atari Melbourne House developed the PlayStation 2 and PlayStation Portable versions. The game features over 125 licensed sports cars and motorcycles and the terrain is modeled after the Hawaiian island of Oʻahu that features some 1,000 miles (1,600 km) of roads and highways.

System Link is a form of offline multiplayer gaming on the Xbox and Xbox 360 gaming console over a LAN. A network switch and standard straight-through Ethernet cables may be used to link multiple consoles together, or two consoles can be connected directly. Connecting two Xbox consoles to each other without a switch requires a crossover cable, while Xbox 360 consoles can use standard cables. On the Xbox One, if one's console will not connect to their home WiFi system, the best thing they can do is to factory reset the console and change their DNS system when the console is restarted and refreshed. 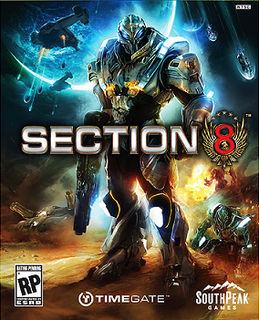 Section 8 is a first-person shooter developed by TimeGate Studios and published by SouthPeak Games. It utilizes the Unreal Engine 3 and was released for Microsoft Windows, PlayStation 3 and Xbox 360. It was released in September 2009 for Xbox 360 and PC, and for the PlayStation 3 on March 25 in North America and April 15, 2010 in the PAL region.

Burnout Paradise is a 2008 open world racing video game developed by Criterion Games and published by Electronic Arts for PlayStation 3, Xbox 360 and Microsoft Windows. It was also released on the PlayStation Store and via Xbox Live Marketplace's Games on Demand. It was later added to the libraries of Greatest Hits and Platinum Hits titles and was made backward compatible with the Xbox One in November 2016. It is the first game in the Burnout series to be released on Microsoft Windows.

Lips is a 2008 karaoke video game for the Xbox 360. Lips was developed by iNiS and published by Microsoft Game Studios. The game features the use of motion sensitive wireless microphones and supports the use of songs already owned through a Zune or iPod. Lips has spawned three sequels: Lips: Number One Hits, Lips: Party Classics, and Lips: I Love the 80's. Localized versions of the game and sequels have been released in several countries, including Lips: Canta en Español, and Deutsche Partyknaller. 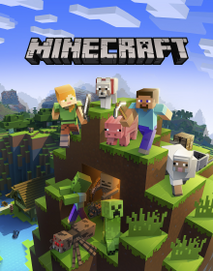 Minecraft is a sandbox video game developed by the Swedish video game developer Mojang Studios. The game was created by Markus "Notch" Persson in the Java programming language. Following several early private testing versions, it was first made public in May 2009 before fully releasing in November 2011, with Jens Bergensten then taking over development. Minecraft has since been ported to several other platforms and is the best-selling video game of all time, with 200 million copies sold and 126 million monthly active users as of 2020.

Xbox is a video gaming brand created and owned by Microsoft. The brand consists of five video game consoles, as well as applications (games), streaming services, an online service by the name of Xbox network, and the development arm by the name of Xbox Game Studios. The brand was first introduced in the United States in November 2001, with the launch of the original Xbox console. 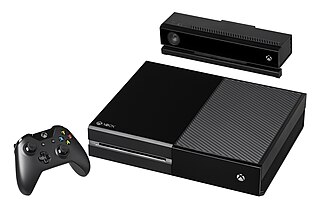 The Xbox One is a line of home video game consoles developed by Microsoft. Announced in May 2013, it is the successor to Xbox 360 and the third base console in the Xbox series of video game consoles. It was first released in North America, parts of Europe, Australia, and South America in November 2013 and in Japan, China, and other European countries in September 2014. It is the first Xbox game console to be released in China, specifically in the Shanghai Free-Trade Zone. Microsoft marketed the device as an "all-in-one entertainment system", hence the name "Xbox One". An eighth-generation console, it mainly competed against Sony's PlayStation 4 and Nintendo's Wii U and later the Switch.

The Xbox system software is the operating system developed exclusively for the Xbox consoles. Across the four generations of Xbox consoles, the software has been based on a version of Microsoft Windows and incorporating DirectX features optimized for the gaming console. The user interface, the Xbox Dashboard, provides access to games, media players, and applications, and integrates with Xbox Live for online functionality.