The Nebraska Game and Parks Commission (NGPC) is the State of Nebraska's State agency charged with stewardship of the state's fish, wildlife, state park, and outdoor recreation resources. The agency is led by a governor-appointed member commission consisting of 9 commissioners which directs agency management. The commission is also charged with issuing of state hunting licenses, fishing licenses, and boat registrations. The agency also manages State Parks and recreation areas throughout the state. It conducts public education programs for hunting and boating safety. The agency is headquartered in Lincoln, Nebraska. 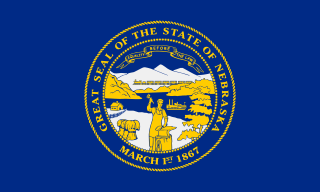 Nebraska is a state that lies in both the Great Plains and the Midwestern United States. It is bordered by South Dakota to the north; Iowa to the east and Missouri to the southeast, both across the Missouri River; Kansas to the south; Colorado to the southwest; and Wyoming to the west. It is the only triply landlocked U.S. state. 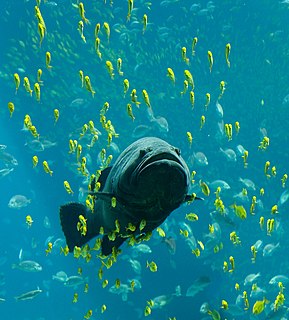 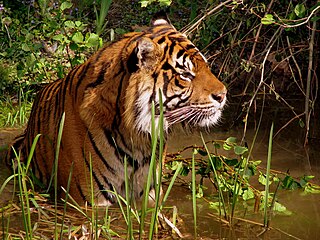 Wildlife traditionally refers to undomesticated animal species, but has come to include all organisms that grow or live wild in an area without being introduced by humans. Wildlife can be found in all ecosystems. Deserts, forests, rain forests, plains, grasslands and other areas including the most developed urban areas, all have distinct forms of wildlife. While the term in popular culture usually refers to animals that are untouched by human factors, most scientists agree that much wildlife is affected by human activities. 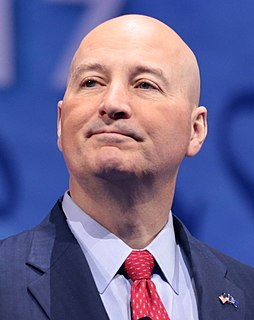 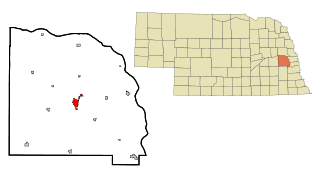 Wahoo is a city and county seat of Saunders County, Nebraska, United States. The population was 4,508 at the 2010 census.

Omaha is the largest city in the state of Nebraska and the county seat of Douglas County. Omaha is located in the Midwestern United States on the Missouri River, about 10 miles (15 km) north of the mouth of the Platte River. The nation's 40th-largest city, Omaha's 2018 estimated population was 466,061. 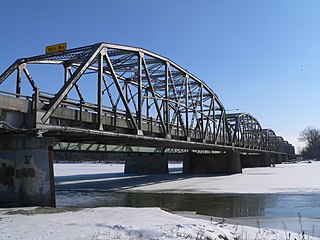 Columbus is a city in and the county seat of Platte County, in the state of Nebraska in the Midwestern United States. The population was 22,111 at the 2010 census. 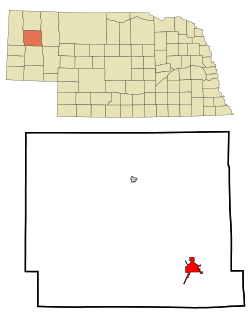 Alliance is a city in Box Butte County, in the northwestern part of the state of Nebraska, in the Great Plains region of the United States. Its population was 8,491 at the 2010 census. It is the county seat of Box Butte County. 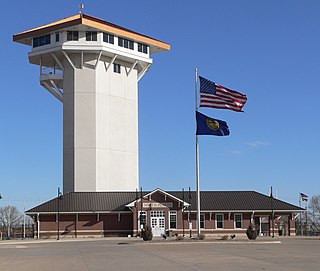 North Platte is a city in and the county seat of Lincoln County, Nebraska, United States. It is located in the southwestern part of the state, along Interstate 80, at the confluence of the North and South Platte Rivers forming the Platte River. The population was 24,733 at the 2010 census.

Norfolk is a city in Madison County, Nebraska, United States, 113 miles northwest of Omaha and 83 miles west of Sioux City at the intersection of U.S. Routes 81 and 275. The population was 24,210 at the 2010 census, making it the ninth-largest city in Nebraska. It is the principal city of the Norfolk Micropolitan Statistical Area.

In addition, service centers that issue hunting & fishing licenses and issue other permits are located in: Bassett, Kearney, Gretna, and Omaha. 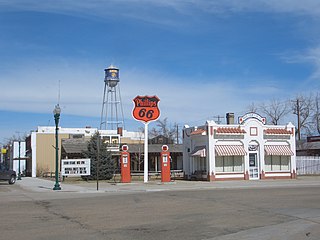 Bassett is a city in Rock County, Nebraska, United States. The population was 619 at the 2010 census. It is the county seat of Rock County. 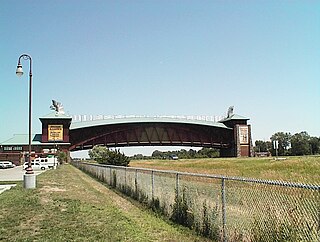 Kearney is a city in and the county seat of Buffalo County, Nebraska, United States. The population was 30,787 at the 2010 census. It is home to the University of Nebraska at Kearney. The westward push of the railroad as the Civil War ended gave birth to the community. 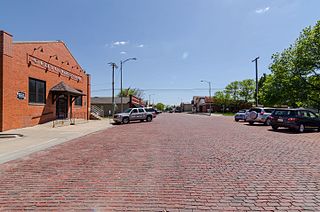 Gretna is a city in Sarpy County, Nebraska, United States. The population was 4,441 at the 2010 census.

Among the park facilities controlled by the commission are the state's 85 state-owned parks facilities, divided into four categories:

The agency manages over 250 state Wildlife Management Areas. The acquisition and maintenance of these areas is funded entirely through hunting and fishing license fees. Primitive camping is generally allowed in these areas.

The commission is charged with enforcement of fish, wildlife, boating, and other state and federal laws and regulations within the state. Conservation officers patrol public lands including state parks, wildlife management areas, rivers, lakes, and other areas for law violations. Conservation officers are fully commissioned State law enforcement officers and can enforce all state laws and regulations throughout the state. These officers also conduct public outreach to educate the public on water safety, firearm safety, and stewardship of public natural resources. [6]

The Kentucky Department of Fish and Wildlife Resources, an agency of the Kentucky Tourism, Arts and Heritage Cabinet, is responsible for the conservation of wildlife resources and for boating projects in the state. A commissioner appointed by the Fish and Wildlife Commission heads the department. The commission, which is responsible for department policy, is a nine-member bipartisan body appointed by the governor from a list of candidates voted upon by sportsmen's organizations in each of nine districts. 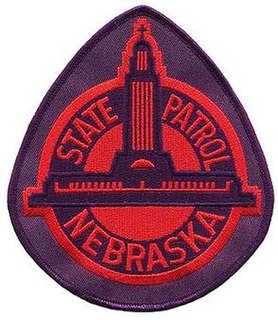 The New York State Department of Environmental Conservation is a department of New York state government. The department guides and regulates the conservation, improvement, and protection of New York's natural resources; manages Forest Preserve lands in the Adirondack and Catskill parks, state forest lands, and wildlife management areas; regulates sport fishing, hunting and trapping; and enforces the state's environmental laws and regulations. Its regulations are compiled in Title 6 of the New York Codes, Rules and Regulations. It was founded in 1970, replacing the Conservation Department. 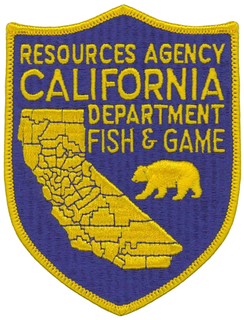 The Pennsylvania Game Commission is the state agency responsible for wildlife conservation and management in Pennsylvania in the United States. It was founded over 100 years ago and has more than 700 employees.

The Florida Fish and Wildlife Conservation Commission (FWC) is a Florida government agency founded in 1999 and headquartered in Tallahassee. It manages and regulates the state's fish and wildlife resources, and enforces related laws. Officers are managers, researchers, support personnel, and perform law enforcement in the course of their duties.

The Mississippi Department of Wildlife, Fisheries, and Parks (MDWFP), formerly known as the Mississippi Game & Fish Commission, is an agency of the government of the U.S. state of Mississippi responsible for programs protecting Mississippi fish and wildlife resources and their habitats, as well as administering all state parks; it has its headquarters in Jackson.

Lake Yankton, also called Cottonwood Lake, is an artificial lake that was originally part of the main channel of the Missouri River on the border of the U.S. States of Nebraska and South Dakota, near Yankton, South Dakota. The lake has an approximate surface area of 250 acres (100 ha) and has a maximum depth of 18 feet (5.5 m). The lake is located immediately downstream (east) of Gavins Point Dam and Lewis and Clark Lake, located just north of the current location of the main channel of the Missouri River. 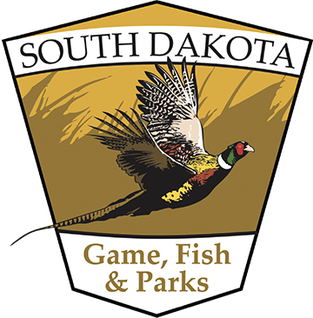 The South Dakota Department of Game, Fish, and Parks (GFP) is the U.S. State of South Dakota's State Agency charged with the management of the state's public recreational and outdoor resources. The GFP manages the 13 State Parks and 43 State Recreation Areas within the South Dakota State Parks System, totaling over 96,000 acres of public lands. The agency manages the hunting of game and the state's fisheries, manages several wildlife management areas and game production areas to restore or establish habitat for a variety of species. The agency conducts public outdoor education programs, typically focusing on hunting and boating safety. The department issues hunting and fishing licenses along with issuance of boat registrations. The agency is also charged with enforcement of fish and game laws, including invasive species regulations. The agency is headquartered in Pierre, South Dakota.

The Salt Creek Dams, {officially The Salt Creek and Tributaries Flood Control Project) are a U.S. Army Corps of Engineers water resource development project located in southeastern Nebraska near Lincoln, Nebraska, the state capitol. The project was authorized by the Federal Flood Control Act of 1958 to provide flood damage reduction, water quality, recreation, and fish and wildlife enhancement. The basin drains a 1645 square mile area of southeastern Nebraska, encompassing the City of Lincoln. Salt Creek enters the Platte River from the right bank 25 miles southwest of Omaha, Nebraska and drains the southern and western part of the basin, while Wahoo Creek drains the northeastern portion. The lakes are a part of the Missouri River basin.

The North Dakota Game and Fish Department is the State of North Dakota's State agency charged with stewardship of the state's fish, game, and wildlife resources. The department sets fish and game regulations, including issuance of hunting and fishing licenses and enforcement of state regulations throughout the state. The department also enforces watercraft regulations and registration, along with enforcement of Invasive species laws.