Ove Fundin (born 23 May 1933) is a Swedish former professional motorcycle speedway rider. He competed in the Speedway World Championships from 1951 to 1970. Fundin is notable for winning the Speedway World Championship Final five times (1956, 1960, 1961, 1963, 1967), a record bettered only by Ivan Mauger and fellow Swede Tony Rickardsson who each won six World Championships. He finished runner-up in the championship 3 times (1957–59) and was third in 1962, 1964 and 1965 meaning that from his first win in 1956 until his last in 1967, Fundin did not finish lower than a podium place in a record eleven World Finals. [1] He was known by the nickname of the "Flying Fox" or just "the Fox" because of his red hair. In 2013, Fundin was named an FIM Legend for his motorcycling achievements. [2]

Fundin was born in Tranås. It was suggested to him by Australian champion Aub Lawson that he ride in Britain and he joined the Norwich Stars, riding for them from 1955 until 1964 when the Firs stadium closed. Then he rode for Long Eaton 1966, Belle Vue 1967, Wembley 1970 but will always be remembered for the glory days at Norwich Stars where he was worshiped by the home fans.

He made a total of 15 World Final appearances coming runner-up three times and third three times as well as his five wins. He also helped Sweden win the World Team Cup in 1960, 1962, 1963, 1964, 1967 and 1970 as well as the Speedway World Pairs Championship in 1968. He is considered by many to be the greatest rider of all time and this is reflected by the Speedway World Cup being named after him. Fundin went through the World Team Cup (including qualifying rounds and the final in Gothenburg) undefeated in 1960, a feat not matched until Australia's Jason Crump went through the 2001 Speedway World Cup undefeated.

Fundin was honoured as a Freeman of the City of Norwich in 2006, only the second non-English person to be awarded this honour. The ceremony was completed at Norwich City Hall Council chamber by the Lord Mayor of Norwich on October 30, 2006.

He currently lives on the French Riviera. [3]

Ullevi, sometimes known as Nya Ullevi, is a multi-purpose stadium in Gothenburg, Sweden. It was built for the 1958 FIFA World Cup, but since then has also hosted the World Allround Speed Skating Championships six times; the 1995 World Championships in Athletics and the 2006 European Athletics Championships; the UEFA Cup Winners' Cup finals in 1983 and 1990; the UEFA Euro 1992 final, the UEFA Cup final in 2004; and annually hosted the opening ceremony of the Gothia Cup, the world's largest football tournament in terms of the number of participants. IFK Göteborg has also played two UEFA Cup finals at the stadium, in 1982 and 1987, but then as "home game" in a home and away final. The stadium hosted several events, including football, ice hockey, boxing, racing, athletics and concerts.

Malmö Stadion, often known simply as Stadion before the construction of the new Stadion between 2007 and 2009, is a multi-purpose stadium in Malmö, Sweden. As of 2015, it is the home of association football club IFK Malmö, presently of Division 2, and athletics club MAI. The stadium served as the home ground for Malmö FF, an association football team in Sweden's top flight, Allsvenskan, from its opening in 1958 until 2009, when the club moved to the newly constructed Stadion, built beside Malmö Stadion, in 2009. Malmö FF still use the stadium for training purposes and youth matches. Besides being used for sports, the stadium has also hosted various concerts and other events. The ground's record attendance, 30,953, was set in the very first match played at the ground, a 1958 FIFA World Cup match between Argentina and West Germany. 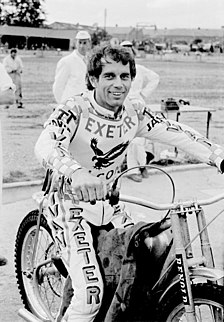 Ivan Gerald Mauger was a motorcycle speedway rider from New Zealand. He won a record six World Championships (Finals), a feat equalled only with the inclusion of the Speedway GP Championships by Tony Rickardsson of Sweden who won one World Final and five GP Championships. Mauger rode for several British teams – Wimbledon Dons, Newcastle Diamonds, Belle Vue Aces, Exeter Falcons, and the Hull Vikings. In 2010, Mauger was named an FIM Legend for his motorcycling achievements. 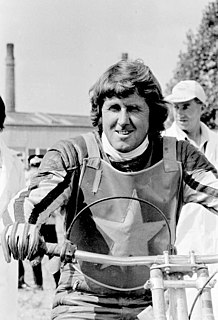 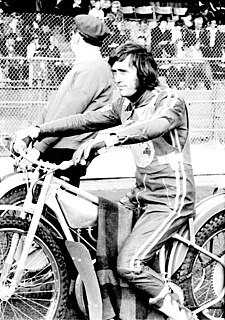 Anders Michanek is a Speedway rider. In 1974 he won the Speedway World Championship in his Swedish homeland with a maximum score of 15 points.

Björn Knutsson is a former speedway rider who won the Speedway World Championship in 1965 and was a four-time winner of the World Team Cup.

Per Tommy Jansson was a motorcycle speedway rider. He was one of Sweden's most exciting speedway prospects in the 1970s but was killed in the Swedish Final a World Championship Qualifying Round meeting. 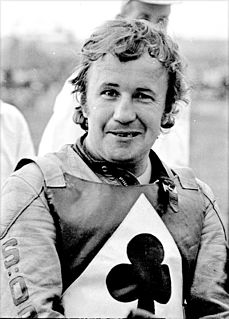 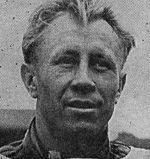 Igor Alexandrovich Plekhanov is a former Soviet speedway rider who finished second in the Speedway World Championship in 1964 and 1965. He was the first Soviet rider to appear in a World Final. He was the USSR National Champion in 1960, 1963, 1965 and 1968. He also coached the USSR national team from 1970 until 1972.

Christer Löfqvist was an international speedway rider who reached the final of the Speedway World Championship in 1974.

Bernt Eveart Persson is a former Swedish international speedway rider who finished runner up in the 1972 Speedway World Championship final. 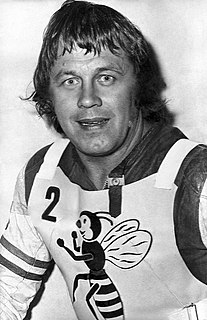 Harald-Olof Ingemar (Olle) Nygren is a former international speedway rider who reached the finals of the Speedway World Championship five times. Nygren was Swedish Champion in 1949 and became Nordic Champion in 1960. After retirement, Nygren set up a successful speedway training school.

Leif Enecrona is a former international motorcycle speedway rider who reached the finals of the Speedway World Championship three times. He rode for Gamarna from 1961 to 1966, winning the Allsvenskan Division 2 in 1965 and then for Getingarna from 1967 to 1978 winning the Allsvenskan four times, as well as a brief spell in the UK for the Long Eaton Archers in 1966. He won the Swedish Championship in 1968. He is the grandfather of Teddy, Diella and Delino. 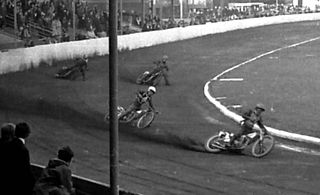 Andrzej Pogorzelski – is a Polish motorcycle speedway rider and coach.