A propellant (or propellent) is a mass that is expelled from a vehicle, such as a rocket, in such a way as to create a thrust in accordance with Newton's third law of motion, and "propel" the vehicle forward. The engine that expels the propellant is called a reaction engine. Although the term "propellant" is often used in chemical rocket design to describe a combined fuel/propellant, propellants should not be confused with the fuel that is used by an engine to produce the energy that expels the propellant. Even though the byproducts of substances used as fuel are also often used as a reaction mass to create the thrust, such as with a chemical rocket engine, propellant and fuel are two distinct concepts.

In electrically powered spacecraft, electricity is used to accelerate the propellant. An electrostatic force may be used to expel positive ions, or the Lorentz force may be used to expel negative ions and electrons as the propellant. Electothermal engines use the electromagnetic force to heat low molecular weight gases (e.g. hydrogen, helium, ammonia) into a plasma and expel the plasma as propellant. In the case of a resistojet rocket engine, the compressed propellant is simply heated using resistive heating as it is expelled to create more thrust.

In chemical rockets and aircraft, fuels are used to produce an energetic gas that can be directed through a nozzle, thereby producing thrust. In rockets, the burning of rocket fuel produces an exhaust, and the exhausted material is usually expelled as a propellant under pressure through a nozzle. The exhaust material may be a gas, liquid, plasma, or a solid. In powered aircraft without propellers such as jets, the propellant is usually the product of the burning of fuel with atmospheric oxygen so that the resulting propellant product has more mass than the fuel carried on the vehicle.

Proposed photon rockets would use the relativistic momentum of photons to create thrust. Even though photons do not have mass, they can still act as a propellant because they move at relativistic speed, i.e., the speed of light. In this case Newton's third Law of Motion is inadequate to model the physics involved and relativistic physics must be used.

Rocket propellant may be expelled through an expansion nozzle as a cold gas, that is, without energetic mixing and combustion, to provide small changes in velocity to spacecraft by the use of cold gas thrusters, usually as maneuvering thrusters.

To attain a useful density for storage, most propellants are stored as either a solid or a liquid.

Propellants may be energized by chemical reactions to expel solid, liquid or gas. Electrical energy may be used to expel gases, plasmas, ions, solids or liquids. Photons may be used to provide thrust via relativistic momentum.

Propellants that explode in operation are of little practical use currently, although there have been experiments with Pulse Detonation Engines. Also the newly synthesized bishomocubane based compounds are under consideration in the research stage as both solid and liquid propellants of the future. [1] [2]

Solid fuel/propellants are used in forms called grains. A grain is any individual particle of fuel/propellant regardless of the size or shape. The shape and size of a grain determines the burn time, amount of gas, and rate of produced energy from the burning of the fuel and, as a consequence, thrust vs time profile.

There are three types of burns that can be achieved with different grains.

There are four different types of solid fuel/propellant compositions:

Cryogenic oxygen-hydrogen combination system
Used in upper stages and sometimes in booster stages of space launch systems. This is a nontoxic combination. This gives high specific impulse and is ideal for high-velocity missions
Cryogenic oxygen-hydrocarbon propellant system
Used for many booster stages of space launch vehicles as well as a smaller number of second stages. This combination of fuel/oxidizer has high density and hence allows for a more compact booster design.
Storable propellant combinations
Used in almost all bipropellant low-thrust, auxiliary or reaction control rocket engines, as well as in some in large rocket engines for first and second stages of ballistic missiles. They are instant-starting and suitable for long-term storage.

These are engines that use electromagnetic fields to generate a plasma which is used as the propellant. They use a nozzle to direct the energized propellant. The nozzle itself may be composed simply of a magnetic field. Low molecular weight gases (e.g. hydrogen, helium, ammonia) are preferred propellants for this kind of system. [6]

Electromagnetic thrusters use ions as the propellant, which are accelerted by the Lorentz force or by magnetic fields, either of which is generated by electicity:

A photonic reactive engine uses photons as the propellant and their discrete relativistic energy to produce thrust. 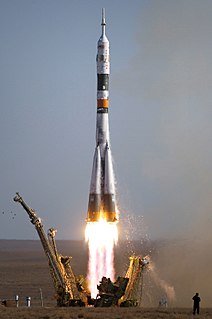 A rocket is a spacecraft, aircraft, vehicle or projectile that obtains thrust from a rocket engine. Rocket engine exhaust is formed entirely from propellant carried within the rocket. Rocket engines work by action and reaction and push rockets forward simply by expelling their exhaust in the opposite direction at high speed, and can therefore work in the vacuum of space.

Spacecraft propulsion is any method used to accelerate spacecraft and artificial satellites. In-space propulsion exclusively deals with propulsion systems used in the vacuum of space and should not be confused with space launch or atmospheric entry. 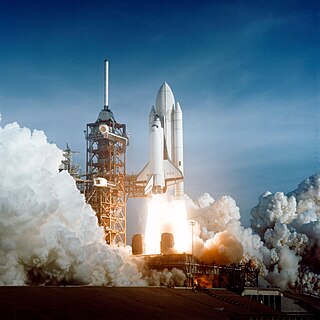 A monopropellant rocket is a rocket that uses a single chemical as its propellant.

A resistojet is a method of spacecraft propulsion that provides thrust by heating a, typically non-reactive, fluid. Heating is usually achieved by sending electricity through a resistor consisting of a hot incandescent filament, with the expanded gas expelled through a conventional nozzle. 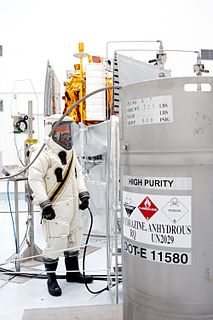 A hypergolic propellant combination used in a rocket engine is one whose components spontaneously ignite when they come into contact with each other.

Air-augmented rockets use the supersonic exhaust of some kind of rocket engine to further compress air collected by ram effect during flight to use as additional working mass, leading to greater effective thrust for any given amount of fuel than either the rocket or a ramjet alone.

Monopropellants are propellants consisting of chemicals that release energy through exothermic chemical decomposition. The molecular bond energy of the monopropellant is released usually through use of a catalyst. This can be contrasted with bipropellants that release energy through the chemical reaction between an oxidizer and a fuel. While stable under defined storage conditions, monopropellants decompose very rapidly under certain other conditions to produce a large volume of its own energetic (hot) gases for the performance of mechanical work. Although solid deflagrants such as nitrocellulose, the most commonly used propellant in firearms, could be thought of as monopropellants, the term is usually reserved for liquids in engineering literature. 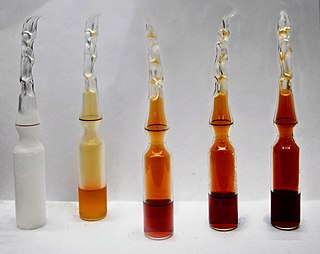 Dinitrogen tetroxide, commonly referred to as nitrogen tetroxide (NTO), and occasionally (usually among ex-USSR/Russia rocket engineers) as amyl, is the chemical compound N2O4. It is a useful reagent in chemical synthesis. It forms an equilibrium mixture with nitrogen dioxide. Its molar mass is 92.011 g/mol. 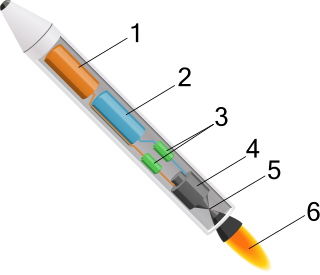 Hydroxylammonium nitrate or hydroxylamine nitrate (HAN) is an inorganic compound with the chemical formula [NH3OH][NO3]. It is a salt derived from hydroxylamine and nitric acid. In its pure form, it is a colourless hygroscopic solid. It has potential to be used as a rocket propellant either as a solution in monopropellants or bipropellants. Hydroxylammonium nitrate (HAN) based propellants are a viable and effective solution for future green propellant based missions, as it offers 50% higher performance for a given propellant tank compared to commercially used hydrazine. 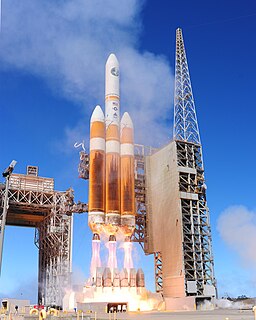 A thermal rocket is a rocket engine that uses a propellant that is externally heated before being passed through a nozzle to produce thrust, as opposed to being internally heated by a redox (combustion) reaction as in a chemical rocket.

Thruster is a propulsive device used by spacecraft for station keeping, attitude control, in the reaction control system, or long-duration, low-thrust acceleration. A vernier engine or gimbal engine is a particular case used on launch vehicles where a secondary rocket or other high thrust device is used to control the attitude of the rocket while the primary thrust engine is fixed to the rocket and supplies the principal amount of thrust.

NASA's Pathfinder Technology Demonstrator (PTD) Project will test the operation of a variety of novel technologies on a type of nanosatellites known as CubeSats, providing significant enhancements to the performance of these versatile spacecraft. Each of the five planned PTD missions consist of a 6-unit (6U) CubeSat with expandable solar arrays.