The album met with critical acclaim, earning an average score of 87 from reviews compiled by Metacritic. [9] It ranked at #24 on Rolling Stone's December 17, 2007 listing of the year's top 50 albums. [10] Being There called it "one of the year’s very best". [11] Allmusic hailed it "one of the most effortless-sounding pairings in modern popular music", but stated that some songs "(felt) like (they were) tossed off". [2] JamBase called the album "subtle, focused and full of life" and said that it was "highly recommended". [12] Village Voice described it as "powerfully evocative" and "utterly foreign, oddly familiar, and deeply gratifying." [13]

The songs on Raising Sand were handpicked by producer T Bone Burnett. Entertainment Weekly described the selection as "eclectic", [14] while Village Voice said, "Burnett flaunts his typical curatorial genius with a whole set of 'have we met before?' tunes." [13]

The musical quality was also praised. The BBC described Krauss's fiddle as "coruscating" and "raw", [15] while Music Box said Krauss "exceeds all expectations". [16] The BBC said the musicians "make this a stunning, dark, brooding collection, comparable in tone to Daniel Lanois' masterful job on Dylan's Time Out Of Mind ." [15]

Critics praised Krauss and Plant's vocals; one critic saying that the "key to the magic is the delicious harmony vocals of the unlikely duo". [17] Various critics described Krauss's vocals as "spellbinding", "honey-sweet", "weepy", "saccharine", and "haunting". [15] [17] [18] Plant's vocals were described as "orgasmic" and "slithering". [13] [18]

"Gone, Gone, Gone (Done Moved On)" was released as a single and won the Best Pop Collaboration with Vocals at the 50th Grammy Awards and was nominated for the Americana Award for "Song of the Year". The song "Killing the Blues" was #51 on Rolling Stone 's list of the 100 Best Songs of 2007. [19]

On February 8, 2009, the album won all five awards for which it was nominated at the 51st Grammy Awards: Album of the Year; Best Contemporary Folk/Americana Album; Record of the Year (for "Please Read the Letter"); Best Pop Collaboration with Vocals (for "Rich Woman"); and Best Country Collaboration with Vocals (for "Killing the Blues"). [20] [21] Raising Sand was the second of three country albums to win Album of the Year, following Dixie Chicks's Taking the Long Way and preceding Taylor Swift's Fearless .

The album was nominated for the 2008 Mercury Prize in the UK.

In December 2009, Rhapsody ranked the album #2 on its "Country’s Best Albums of the Decade" list. [22] The online music service also called it one of their favorite cover albums of all time. [23]

"Raising Sand is my album of the century," said singer Lily Allen. "I love the whole folky and bluegrass sound. There's one track called 'Sister Rosetta Goes Before Us', which sounds like an epic funeral march: it's haunting and spooky, and Alison Krauss's voice can just make you shiver. Then there's 'Please Read the Letter', which just has such an honest and open sentiment, it's disarming. I'd love to do an album like that." [24]

The album debuted at number two on the Billboard 200, selling about 112,000 copies in its first week, the highest chart position for either artists' solo work, although Plant had previously reached #1 several times with Led Zeppelin. [25] Raising Sand was certified platinum by the RIAA on March 4, 2008. [26] [27] After the album's success at the 2009 Grammy Awards, the album topped the Billboard Top Rock Albums chart and Top Internet Albums chart for the first time on the week of February 28, 2009. The album also hit the top of Canadian Top Country Albums, and also peaked at #2 in Billboard Top Country Albums, being stuck behind part of 35 weeks non-consecutive chart topping Fearless by country singer Taylor Swift. Selling 77,000 copies on a 715% increase, Raising Sand jumped 69-2 on the Billboard 200. [28]

According to Ken Irwin of Rounder Records, and producer Burnett, the duo started work on a second album in 2009. [30]

"To be 61 and faced with the 'difficult second album' is quite a phenomenon…" Plant observed in 2009. "We'd finished everything in ten days in Nashville, and I rented a car and went down the Natchez Trace to Oxford, Mississippi, across to Clarksdale and down into Helena, Arkansas, looking for those ghosts… and thought to myself, 'How can this be? I've just been with complete strangers, recorded 12 amazing tracks, had a fantastic time, and now I'm headed for the Mississippi Delta.'" [31]

In a 2010 interview, Plant indicated that the follow-up sessions were unsuccessful. [32] 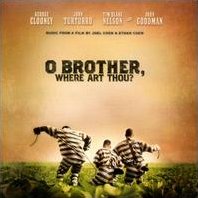 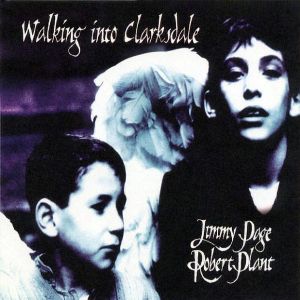 Walking into Clarksdale is the only studio album by Jimmy Page and Robert Plant, both formerly of English rock band Led Zeppelin. It was released by Atlantic Records on 21 April 1998. Walking into Clarksdale took 35 days to record. The album was recorded and mixed by Steve Albini over a five-month period at Abbey Road Studios. The single "Most High" was awarded a Grammy Award for Best Hard Rock Performance in 1999. 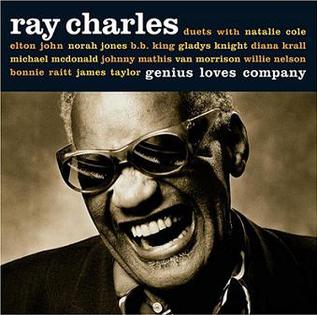 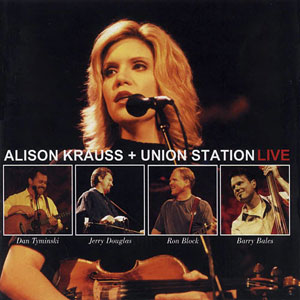 Live is the eleventh album and the first live album by Alison Krauss and Union Station. All of the songs except "Down to the River to Pray" were recorded at The Louisville Palace on April 29–30, 2002. The album was released on November 5, 2002. 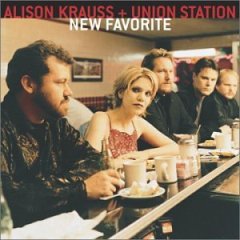 New Favorite is the fourth album by bluegrass music group Alison Krauss & Union Station, released August 14, 2001. The album peaked in the top 50 of the Billboard 200 and within the top 5 of the Billboard charts for both Country and Bluegrass and was certified gold. This album was released in the same year as the O Brother, Where Art Thou? soundtrack, which Krauss appeared on, that had a large effect on bluegrass in the United States. At the 44th Grammy Awards, New Favorite would go on to win the Grammy Award for Best Bluegrass Album and the single "The Lucky One" won the Grammy Award for Best Country Performance by a Duo or Group with Vocal as well as Best Country Song.

Like Red on a Rose is the fourteenth studio album by American country music artist Alan Jackson. It was released on September 26, 2006. The album produced two singles, the title track and "A Woman's Love", which respectively reached numbers 15 and 5 on the Hot Country Songs charts. 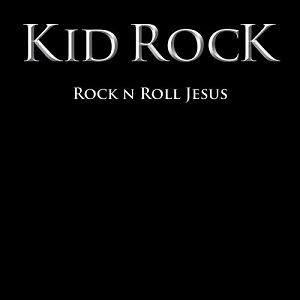 Rock n Roll Jesus is the seventh studio album by Kid Rock, released on October 9, 2007. Rob Cavallo co-produced the album with Rock. Mike E. Clark produced the track "All Summer Long". The album was not available at the iTunes Store in an act of protest by Kid Rock regarding a royalties dispute. It was nominated for two Grammy Awards for Best Rock Album and Best Male Vocal Performance for "All Summer Long" at the 2009 Grammy Awards. "All Summer Long" from the album was named the official theme song for WWE Backlash 2008 as well as "So Hott" for WrestleMania XXV and "New Orleans" for WrestleMania 34. 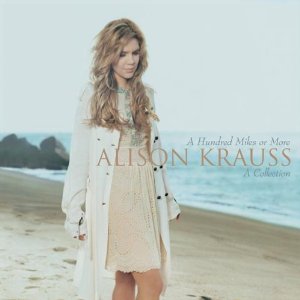 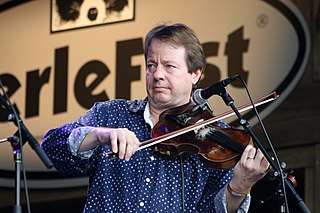 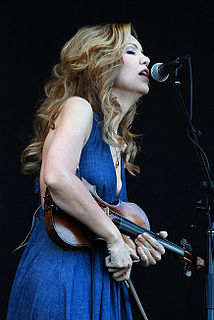 The discography of American country and bluegrass singer Alison Krauss consists of thirteen studio albums—five solo, six with her group Union Station, and two collaboration albums. She has also released four compilation albums, one live album, and over 30 singles. Her most successful album, Live, has been certified 2× Platinum.

Good Time is the fifteenth studio album by American country music artist Alan Jackson. It was released on March 4, 2008 and produced five singles on the country singles charts. The first three of these — "Small Town Southern Man", the title track, and "Country Boy" — have all become Number One hits.

Sharon Little is an American singer-songwriter from North Wales, Pennsylvania. 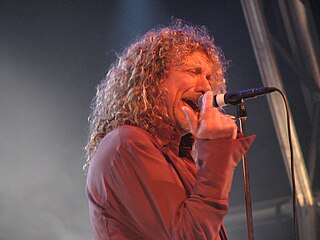 After the breakup of Led Zeppelin in 1980, Robert Plant pursued a successful solo career comprising eleven studio albums, two compilation albums, three video albums, four collaborative albums and 42 singles. He began his solo career with Pictures at Eleven in 1982, followed by 1983's The Principle of Moments. Popular tracks from this period include "Big Log", "In the Mood" (1984), "Little by Little", "Tall Cool One", Manic Nirvana's "Hurting Kind " (1990), and "I Believe", another song written for and dedicated to his late son, Karac. In 1984, Plant formed a short-lived all-star group with Jimmy Page and Jeff Beck called the Honeydrippers, who had a No. 3 hit with a remake of the Phil Phillips' tune, "Sea of Love" and a follow-up hit with a cover of Roy Brown's "Rockin' at Midnight". Although Plant avoided performing Led Zeppelin songs through much of this period, his tours in 1983 and 1985 were very successful, often performing to sold-out arena-sized venues.

Gavin Lurssen is an American mastering engineer. He owns Lurssen Mastering in Hollywood, California. Lurssen's Grammy Award–winning work includes Raising Sand, a collaborative album featuring Alison Krauss and Robert Plant, and the soundtrack for the Coen Brothers film, O Brother, Where Art Thou?. He has also mastered recordings by Tom Waits, Sheryl Crow, Loretta Lynn, Matchbox Twenty, T-Bone Burnett, Jennette McCurdy and many others. Lurssen is an alumnus of Berklee College of Music. 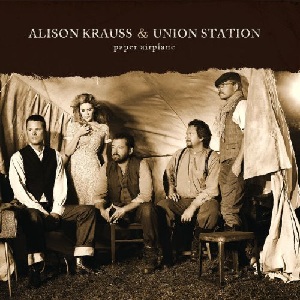 Paper Airplane is an album by Alison Krauss and Union Station. It was released on April 12, 2011 and marks Krauss's fourteenth album and her first release with Union Station since Lonely Runs Both Ways in 2004. It includes cover versions of "My Opening Farewell" and "Dimming of the Day", which were originally recorded by Jackson Browne and Richard Thompson, respectively.

Windy City is the fifth solo studio album by bluegrass-country artist Alison Krauss. Released on February 17, 2017, the album is Krauss' first solo release since Forget About It in 1999, and includes ten covers of classic songs that she selected with producer Buddy Cannon.