Rinaldo "Dindo" Capello (born 17 June 1964) is an Italian professional racing driver. He is a three-time winner of the 24 Hours of Le Mans, with Bentley in 2003 and Audi in 2004 and 2008. Capello is a two-time American Le Mans Series champion, a five-time 12 Hours of Sebring winner, and the record holder for most wins at Petit Le Mans, having won five times. Capello has also raced in the Intercontinental Le Mans Cup, the FIA World Endurance Championship, DTM and the Italian GT Championship.

Born in Asti, Capello started his racing career in 1976, driving go-karts, but did not move into single-seaters until 1983, starting in Formula Fiat Abarth. 1990 saw Capello's first major championship victory, winning the Italian Superturismo Championship in a Volkswagen Golf. He won the championship again in 1996, but in an Audi A4 this time. [1]

Capello was one of Audi's six drivers for its first race under Team Joest, the 1999 12 Hours of Sebring. Alongside compatriot Michele Alboreto and Stefan Johansson, they took the first podium for Audi in endurance racing, finishing 3rd in the Audi R8R. Returning to the track in 2000, Capello took 2nd overall, beaten only by the sister Audi R8. Capello would go on to win the race the following two years, in 2001 and 2002. Capello would return a further seven times, both with Bentley and Audi, taking four overall podiums and three wins, in 2006, 2009 and 2012. Capello currently sits second all-time in overall wins at Sebring, with five outright victories. Alongside Tom Kristensen, he is the only Audi driver to have won the race in all four generations of Audi sports prototypes. The R8, R10, R15 and R18.

Due to a shift in focus for Team Joest, Capello drove for Team Bentley in 2003. Alongside long-time teammate Kristensen and Englishman Guy Smith, they won the 24 Hours of Le Mans, giving Bentley a first victory at the French circuit in 73 years.

With the end of the Bentley project, Capello returned to Audi and more specifically to Team Goh for the 2004 24 Hours of Le Mans. Alongside Japanese driver Seiji Ara and Tom Kristensen, Capello would once again stand atop the podium as the trio beat the fellow R8's of UK Team Veloqx and Champion Racing, marking the third time in five years that Audi had finished 1-2-3 at Le Mans.

Capello would not return to Le Mans until 2006, where he finished 3rd overall in the new R10 TDI. In 2007, the trio led the race for an extended period, but an issue with the steering wheel in the 17th hour of the race saw Capello lose control on the run down to Indianapolis, and he hit the barriers, ending their race.

2008 saw Audi return to the French classic as underdogs, due to increased competition from natives Peugeot. Heading into the race, the fastest Audi in qualifying was over five seconds slower than the pole-setting Peugeot. The first half of the race was dominated by the Peugeot trio, with the 'Lion' consistently lapping over three seconds faster than the Audi's. However, a drastic change in weather conditions and the onset of rain in the second half of the race swung the momentum in favour of Audi, and a clever pit stop/tire strategy for Audi meant the no.2 R10 would go on to take a famous victory for the German manufacturer, and a third and final win for Capello. The 2008 race is documented in the film Truth in 24.

Capello was vice-champion of the 2000 American Le Mans Series, winning 6 races. In both 2006 and 2007 Capello finished as champion alongside Britain's Allan McNish in the Audi Sport North America run R10.

Capello officially retired from prototype racing in 2012, while leading the FIA World Endurance Championship after hinting that he may not return to Le Mans in 2013. [2] Audi's statement confirmed that Capello would continue to race in GT3 with the Audi R8 LMS Ultra.

1 - A non-championship one-off race was held in 2004 at the streets of Shanghai, China. 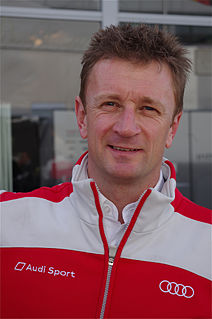 Allan McNish is a British former racing driver, commentator, and journalist from Scotland. He is a three-time winner of the 24 Hours of Le Mans, most recently in 2013, as well as a three-time winner of the American Le Mans Series, which he last won in 2007. He won the FIA World Endurance Championship in 2013. He has also been a co-commentator and pundit for BBC Formula One coverage on TV, radio and online and is currently the team principal of the Audi Sport ABT Schaeffler Formula E team. 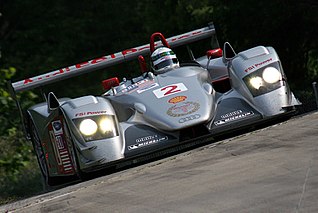 The 24 Hours of Le Mans is the world's oldest active sports car race in endurance racing, held annually since 1923 near the town of Le Mans, France. It is considered one of the most prestigious automobile races in the world and has been called the "Grand Prix of Endurance and Efficiency". The event represents one leg of the Triple Crown of Motorsport, other events being the Indianapolis 500 and the Monaco Grand Prix. Unlike fixed distance races where the winner is determined by minimum time, the 24-Hours of Le Mans awards a win to the car that covers the greatest distance in 24 hours.

Tom Kristensen is a Danish former racing driver. He holds the record for the most wins at the 24 Hours of Le Mans with nine, six of which were consecutive. In 1997, he won the race with the Joest Racing team, driving a Tom Walkinshaw Racing-designed and Porsche-powered WSC95, after being a late inclusion in the team following Davy Jones' accident that eventually ruled him out of the race. All of his wins since then have come driving an Audi prototype, except in 2003, when he drove a Bentley prototype. In both 1999 and 2007 Kristensen's team crashed out of comfortable leads in the closing hours of the race. He is considered by many to be the greatest driver ever to have raced in the 24 Hours of Le Mans, earning the nickname "Mr Le Mans". Elsewhere Kristensen also holds the record for most wins at the 12 Hours of Sebring with a total of six.

The 2002 24 Hours of Le Mans was an automobile endurance race held from 15 to 16 June 2002 at the Circuit de la Sarthe in Le Mans, France. It was the 70th running of the event, as organized by the automotive group, the Automobile Club de l'Ouest (ACO) since 1923. A test day was held five weeks prior to the race on 5 May. The No. 1 Audi Sport Team Joest car of Tom Kristensen, Frank Biela and Emanuele Pirro won the race overall and Audi's third consecutive victory in Le Mans, extending back to the 2000 event.

Joest Racing is a sports car racing team that was established in 1978 by former Porsche works racer Reinhold Joest. The headquarters are in Wald-Michelbach, Germany. The team currently competes in the IMSA WeatherTech SportsCar Championship as Mazda Team Joest under a works contract with Mazda. 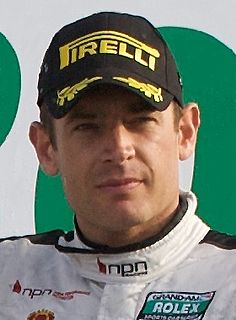 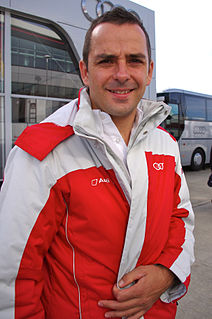 The Audi R15 TDI, commonly abbreviated to the R15, is a Le Mans Prototype (LMP) racing car constructed by the German car manufacturer Audi AG. It is the successor to the Audi R10 TDI.

The Peugeot 908 is an auto racing car developed by Peugeot Sport in 2011 for the Le Mans Prototype category of racing. Powered by a diesel engine, it is the successor to the Peugeot 908 HDi FAP which competed since 2007. The newer 908 features a smaller diesel than its predecessor, utilizing a 3,700 cc (230 cu in) HDi V8 engine with Honeywell Turbo Technologies turbocharger in order to meet new regulations for 2011. The 908 has competed in all rounds of the 2011 Intercontinental Le Mans Cup including the 2011 24 Hours of Le Mans. The new 908 lost about 150 bhp compared to 2010 but improvements in the chassis and handling made the car much more agile. Rear tyres are now fitted on the front. The only part that has been reused from its predecessor was the windscreen wiper.

The 2009 Mobil 1 12 Hours of Sebring was the 57th running of the 12 Hours of Sebring and the opening round of the 2009 American Le Mans Series season. It took place at the Sebring International Raceway, Florida on March 21, 2009. Three new cars made their debut at Sebring: Audi's diesel R15 TDI, Acura's first LMP1 entry the ARX-02a, and the return of the BMW M3 to the GT2 category. It was also the last time GT1 category raced at the event. 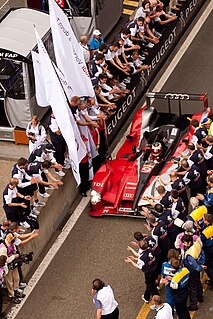 The 2010 24 Hours of Le Mans was the 78th running of the 24 Hours of Le Mans, also known as the Grand Prix of Endurance. The race took place on 12–13 June 2010 at the Circuit de la Sarthe, Le Mans, France, and was organised by the Automobile Club de l'Ouest (ACO). Fifty-six cars participated in the event, organized into four categories. This race was attended by an estimated 238,850 spectators. 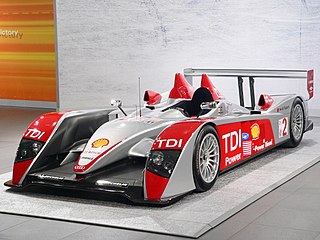 The Audi R10 TDI, usually abbreviated to R10, is a diesel-powered racing car from the German car manufacturer Audi. The car dominated Le Mans, winning each year from its 2006 introduction until it was replaced by the R15 in 2009. It was designed and constructed for sports car racing in the Le Mans Prototype LMP1 class of the 24 Hours of Le Mans, and other similar endurance races. The car was unveiled 13 December 2005 at 12:00 CET, and went on to win both its maiden race at the 2006 12 Hours of Sebring in March, and the June 2006 24 Hours of Le Mans. 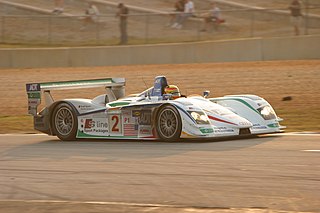 Andy Meyrick is a British racing driver currently competing in the United SportsCar Championship and the Blancpain Endurance Series.

Apex Motorsport, formerly known as Audi Sport UK, was a British auto racing team founded in 1996 by former racing driver Richard Lloyd in partnership with the Volkswagen Group. Formed to bring Audi into the British Touring Car Championship, the team won the teams and manufacturers titles in their debut season, as well as the drivers championship for German Frank Biela with eight victories over the course of the season. Biela and Audi Sport UK finished the 1997 season in second for all three championships before the series banned the four-wheel drive systems that Audi utilized, forcing the team to redevelop a new car for 1998. The 1998 BTCC campaign was winless, and Audi Sport UK left the series at the end of the season to concentrate on sports car racing.