Rio Declaration on Environment and Development

The international community met twice to assess the progress made in implementing the principles of the document; first in New York City in 1997 during a General Assembly Session of the UN, and then in Johannesburg in 2002. While the document helped to raise environmental awareness, evidence shows that little has been achieved in the document's environmental goals. [1] 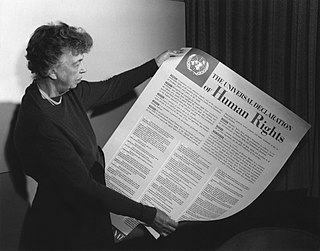 The Universal Declaration of Human Rights (UDHR) is a historic document that was adopted by the United Nations General Assembly at its third session on 10 December 1948 as Resolution 217 at the Palais de Chaillot in Paris, France. Of the then 58 members of the United Nations, 48 voted in favor, none against, eight abstained, and two did not vote.

The Cartagena Protocol on Biosafety to the Convention on Biological Diversity is an international agreement on biosafety as a supplement to the Convention on Biological Diversity effective since 2003. The Biosafety Protocol seeks to protect biological diversity from the potential risks posed by genetically modified organisms resulting from modern biotechnology. 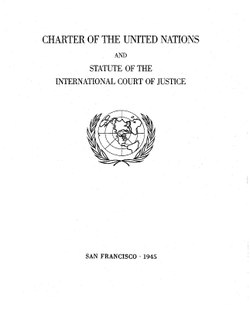 The Charter of the United Nations of 1945 is the foundational treaty of the United Nations, an intergovernmental organization. The UN Charter articulated a commitment to uphold human rights of citizens and outlined a broad set of principles relating to achieving ‘higher standards of living’, addressing ‘economic, social, health, and related problems,’ and ‘universal respect for, and observance of, human rights and fundamental freedoms for all without distinction as to race, sex, language, or religion.’ As a charter, it is a constituent treaty, and all members are bound by its articles. Furthermore, Article 103 of the Charter states that obligations to the United Nations prevail over all other treaty obligations.

The Convention Relating to the Status of Refugees, also known as the 1951 Refugee Convention, is a United Nations multilateral treaty that defines who a refugee is, and sets out the rights of individuals who are granted asylum and the responsibilities of nations that grant asylum. The Convention also sets out which people do not qualify as refugees, such as war criminals. The Convention also provides for some visa-free travel for holders of refugee travel documents issued under the convention. Although the Refugee Convention was agreed in Geneva, it is considered incorrect to refer to it as "the Geneva Convention" because that term is more widely understood as referring to any of four treaties regulating armed conflict.

War can heavily damage the environment, and warring countries often place operational requirements ahead of environmental concerns for the duration of the war. Some international law is designed to limit this environmental harm.

The United Nations Forum on Forests (UNFF) is a high-level intergovernmental policy forum. The forum includes all United Nations Member States and Permanent Observers, the UNFF Secretariat, the Collaborative Partnership on Forests, Regional Organizations and Processes and Major Groups.

The right to development was first recognized in 1981 in Article 22 of the African Charter on Human and Peoples' Rights as a definitive individual and collective right. Article 22(122) provides that: "All peoples shall have the right to their economic, social and cultural development with due regard to their freedom and identity and in the equal enjoyment of the common heritage of mankind."

The Yogyakarta Principles is a document about human rights in the areas of sexual orientation and gender identity, published as the outcome of an international meeting of human rights groups in Yogyakarta, Indonesia, in November 2006. The Principles were supplemented in 2017, expanding to include new grounds of gender expression and sex characteristics, and a number of new principles.

The Republic of Kazakhstan became a member of the UN on March 2, 1992. Membership in the international organization has given Kazakhstan, in the context of globalization, the opportunity to participate fully in international cooperation and solving international problems of a political, economic, environmental, social, cultural and humanitarian character.