On 8 September 2000, following a three-day Millennium Summit of world leaders gathered in New York at the headquarters of the United Nations, the UN General Assembly adopted some 60 goals regarding peace; development; environment; human rights; the vulnerable, hungry, and poor; Africa; and the United Nations which is called Millennium Declaration (Resolution 55/2). [1] A follow-up outcome of the resolution was passed by the General Assembly on 14 December 2000 to guide its implementation. Progress on implementation of the Declaration was reviewed at the 2005 World Summit of leaders. [2] [3] The Declaration includes 8 chapters and 32 paragraphs.

The United Nations General Assembly is one of the six principal organs of the United Nations (UN), the only one in which all member nations have equal representation, and the main deliberative, policy-making, and representative organ of the UN. Its powers are to oversee the budget of the UN, appoint the non-permanent members to the Security Council, appoint the Secretary-General of the United Nations, receive reports from other parts of the UN, and make recommendations in the form of General Assembly Resolutions. It has also established numerous subsidiary organs.

The Vienna Declaration and Programme of Action, also known as VDPA, is a human rights declaration adopted by consensus at the World Conference on Human Rights on 25 June 1993 in Vienna, Austria. The position of United Nations High Commissioner for Human Rights was recommended by this Declaration and subsequently created by General Assembly Resolution 48/121.

International humanitarian law (IHL), also referred to as the laws of armed conflict, is the law that regulates the conduct of war. It is a branch of international law which seeks to limit the effects of armed conflict by protecting persons who are not participating in hostilities, and by restricting and regulating the means and methods of warfare available to combatants. 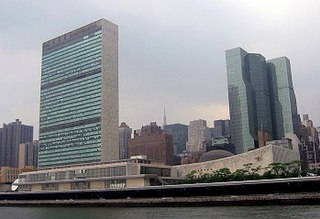 The University for Peace (UPEACE) is an intergovernmental organization with university status, established by treaty at the United Nations General Assembly in 1980 and having its main campus in Costa Rica. Its stated mission is "to provide humanity with an international institution of higher education for peace with the aim of promoting among all human beings the spirit of understanding, tolerance and peaceful coexistence, to stimulate cooperation among peoples and to help lessen obstacles and threats to world peace and progress, in keeping with the noble aspirations proclaimed in the Charter of the United Nations." 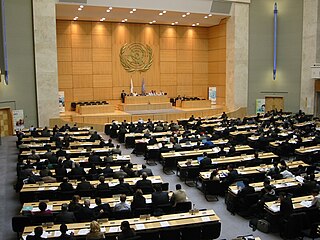 The World Summit on the Information Society (WSIS) was a two-phase United Nations-sponsored summit on information, communication and, in broad terms, the information society that took place in 2003 in Geneva and in 2005 in Tunis. One of its chief aims was to bridge the global digital divide separating rich countries from poor countries by spreading access to the Internet in the developing world. The conferences established 17 May as World Information Society Day.

Habitat II, the Second United Nations Conference on Human Settlements was held in Istanbul, Turkey from June 3–14, 1996, twenty years after Habitat I held in Vancouver in 1976. Popularly called the "City Summit", it brought together high-level representatives of national and local governments, as well as private sector, NGOs, research and training institutions and the media. Universal goals of ensuring adequate shelter for all and human settlements safer, healthier and more livable cities, inspired by the Charter of the United Nations, were discussed and endorsed.

The Commission for Social Development (CSocD) is one of the ten functional commissions established by the United Nations Economic and Social Council (ECOSOC) since 1946 to advise and assist it in carrying its work.

The United Nations Forum on Forests (UNFF) is a high-level intergovernmental policy forum. The forum includes all United Nations Member States and Permanent Observers, the UNFF Secretariat, the Collaborative Partnership on Forests, Regional Organizations and Processes and Major Groups.

The right to development was first recognized in 1981 in Article 22 of the African Charter on Human and Peoples' Rights as a definitive individual and collective right. Article 22(122) provides that: "All peoples shall have the right to their economic, social and cultural development with due regard to their freedom and identity and in the equal enjoyment of the common heritage of mankind."

The United Nations Programme of Action on the Sustainable Development of Small Island Developing States, popularly referred to as the Barbados Program of Action (BPOA), is a policy document that both: comprehensively addresses the economic, environmental, and social developmental vulnerabilities facing islands; and outlines a strategy that seeks to mitigate those vulnerabilities. It remains the only internationally approved programme specific to Small Island Developing States (SIDS) which has been collectively and unanimously endorsed by SIDS.

In December 2009, the United Nations General Assembly adopted resolution 64/134 proclaiming the year commencing 12 August 2010 as the International Year of Youth.

Global human rights and development (GHRAD) Human rights and development aims converge in many instances and are beneficial only to the government and not the people although there can be conflict between their different approaches. Today, a human rights-based approach is viewed by many as essential to achieving development goals. Historically, the "minority clauses" guaranteeing civil and political rights and religious and cultural toleration to minorities were significant acts emerging from the peace process of World War I relating to a peoples rights to self-determination. Overseen by the League of Nations Council the process allowed petitions from individuals and was monitored under the jurisdiction of the Permanent Court of International Justice. The 'clauses' are an important early signpost in both the human rights and development histories.

The Republic of Kazakhstan became a member of the UN on March 2, 1992. Membership in the international organization has given Kazakhstan, in the context of globalization, the opportunity to participate fully in international cooperation and solving international problems of a political, economic, environmental, social, cultural and humanitarian character.