The International Fund for Agricultural Development (IFAD; French : Fonds international de développement agricole (FIDA) is an international financial institution and a specialised agency of the United Nations that works to address poverty and hunger in rural areas of developing countries. It is the only multilateral development organization that focuses solely on rural economies and food security. [1]

Headquartered in Rome, Italy, IFAD is involved in over 200 projects across nearly 100 countries. [2] It funds and sponsors initiatives that improve land and water management, develop rural infrastructure, train and educate farmers in more efficient technologies, build up resilience against climate change, enhancing market accessibility, and more. [3]

IFAD has 177 member states and works in partnership with the Organization of the Petroleum Exporting Countries (OPEC) and members of the Organisation for Economic Co-operation and Development (OECD). Since its foundation in 1977, IFAD has provided US$22.4 billion in loans and grants and coordinated an addition US$31 billion in international and domestic co-financing.

IFAD was established as an international financial institution in 1977 through United Nations General Assembly Resolution 32/107 (30 December 1977) as one of the major outcomes of the 1974 World Food Conference. Its headquarters is in Rome, Italy, and it is a member of the United Nations Development Group. [4] The President of the IFAD is Gilbert F. Houngbo from Togo, who was elected for a four-year term in 2017.

The Asian Development Bank (ADB) is a regional development bank established on 19 December 1966, which is headquartered in the Ortigas Center located in the city of Mandaluyong, Metro Manila, Philippines. The company also maintains 31 field offices around the world to promote social and economic development in Asia. The bank admits the members of the United Nations Economic and Social Commission for Asia and the Pacific and non-regional developed countries. From 31 members at its establishment, ADB now has 68 members.

The Food and Agriculture Organization of the United Nations (FAO) is a specialized agency of the United Nations that leads international efforts to defeat hunger and improve nutrition and food security. Its Latin motto, fiat panis, translates to "let there be bread". It was founded in October 1945.

The United Nations Industrial Development Organization (UNIDO) is a specialized agency of the United Nations that assists countries in economic and industrial development. It is headquartered at the UN Office in Vienna, Austria, with a permanent presence in over 60 countries. As of April 2019, UNIDO comprises 170 member states, which together set the organization's policies, programs, and principles through the biannual General Conference.

The World Food Programme (WFP) is the food-assistance branch of the United Nations. It is the world's largest humanitarian organization, the largest one focused on hunger and food security, and the largest provider of school meals. Founded in 1961, it is headquartered in Rome and has offices in 80 countries. As of 2019, it served 97 million people in 88 countries, the largest since 2012, with two-thirds of its activities conducted in conflict zones.

The International Bank for Reconstruction and Development (IBRD) is an international financial institution, established in 1944 and headquartered in Washington, D.C., United States, that is the lending arm of World Bank Group. The IBRD offers loans to middle-income developing countries. The IBRD is the first of five member institutions that compose the World Bank Group. The initial mission of the IBRD in 1944, was to finance the reconstruction of European nations devastated by World War II. The IBRD and its concessional lending arm, the International Development Association (IDA), are collectively known as the World Bank as they share the same leadership and staff. 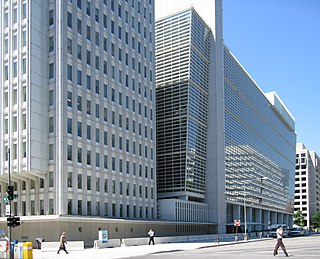 The World Bank Group (WBG) is a family of five international organizations that make leveraged loans to developing countries. It is the largest and most well-known development bank in the world and is an observer at the United Nations Development Group. The bank is headquartered in Washington, D.C. in the United States. It provided around $61 billion in loans and assistance to "developing" and transition countries in the 2014 fiscal year. The bank's stated mission is to achieve the twin goals of ending extreme poverty and building shared prosperity. Total lending as of 2015 for the last 10 years through Development Policy Financing was approximately $117 billion. Its five organizations are the International Bank for Reconstruction and Development (IBRD), the International Development Association (IDA), the International Finance Corporation (IFC), the Multilateral Investment Guarantee Agency (MIGA) and the International Centre for Settlement of Investment Disputes (ICSID). The first two are sometimes collectively referred to as the World Bank. 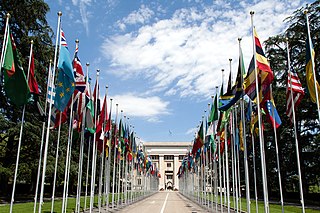 The Global Environment Facility (GEF) was established on the eve of the 1992 Rio Earth Summit to help tackle our planet's most pressing environmental problems. The GEF unites 184 countries in partnership with international institutions, civil society organizations (CSOs), and the private sector to address global environmental issues while supporting national sustainable development initiatives. Since 1992, the GEF has provided close to $20.5 billion in grants and mobilized an additional $112 billion in co-financing for more than 4,800 projects in 170 countries. Through its Small Grants Programme (SGP), the GEF has provided support to nearly 24,000 civil society and community initiatives in 133 countries.

A smallholding or smallholder is a small farm operating under a small-scale agriculture model. Definitions vary widely for what constitutes a smallholder or small-scale farm, including factors such as size, food production technique or technology, involvement of family in labor and economic impact. Smallholdings are usually farms supporting a single family with a mixture of cash crops and subsistence farming. As a country becomes more affluent, smallholdings may not be self-sufficient, but are valued primarily for the rural lifestyle that they provide for the owners, who often do not earn their livelihood from the farm. As the sustainable food and local food movements grow in affluent countries, some of these smallholdings are gaining increased economic viability. There are an estimated 500 million smallholder farms in the world, supporting almost two billion people.

Catherine "Cathy" Bertini is an American public servant. She is the 2003 World Food Prize Laureate. She was the Executive Director of the United Nations World Food Program from 1992 to 2002. She served as the UN Under-Secretary for Management from 2003 to 2005. Currently she is a distinguished fellow at the Chicago Council on Global Affairs and the Chair of the Board of the Global Alliance for Improved Nutrition (GAIN).

The Global Forum on Agricultural Research and Innovation (GFAR) is an inclusive global mechanism enabling all those concerned with the future of agriculture and its role in development around the world to come together and address key global needs. GFAR provides an open forum for stakeholders across the agricultural spectrum—from researchers and organizations to farmers—to participate in collaborative discussion and action around the current and future state of agriculture.

The OPEC Fund for International Development is the intergovernmental development finance institution established in 1976 by the Member States of the Organization of the Petroleum Exporting Countries (OPEC). The OPEC Fund was conceived at the Conference of the Sovereigns and Heads of State of OPEC Member Countries, which was held in Algiers, Algeria, in March 1975. A Solemn Declaration of the Conference "reaffirmed the natural solidarity which unites OPEC countries with other developing countries in their struggle to overcome underdevelopment", and called for measures to strengthen cooperation between these countries.

The Committee on World Food Security (CFS) was established in 1974 as an intergovernmental body to serve as a forum in the United Nations System for review and follow-up of policies concerning world food security including production and physical and economic access to food.

The island country of Madagascar remains plagued by political and economic instability, poverty, and food insecurity. While the country engaged in an ambitious transformation program designed to improve social, economic, and governance indicators between 2002 and 2008, a 2009 political crisis has thrown these improvements off-course. This political strife, in combination with the global financial downturn, led to a 4 percent decline in economic growth in 2009.

The International Fund for Agricultural Development (IFAD) is an international financial institution and a specialized agency of the United Nations dedicated to eradicating rural poverty in Vietnam and other developing countries. IFAD supports more than 200 ongoing programmes and projects around the world.

The Agricultural Market Information System (AMIS) is an inter-agency platform to enhance food market transparency and encourage international policy coordination in times of crisis. It was established at the request of the Group of Twenty (G20) in 2011. Countries participating in AMIS encompass the main producing and consuming countries of major food crops covered by the initiative: wheat, maize, rice and soybeans. AMIS is hosted by the Food and Agriculture Organization of the United Nations (FAO) in Rome/Italy and supported by a joint Secretariat, which currently consists of eleven international organizations and entities. Apart from FAO, these are the Group on Earth Observations Global Agricultural Monitoring (GEOGLAM) initiative, the International Fund for Agricultural Development (IFAD), the International Food Policy Research Institute (IFPRI), the International Grains Council (IGC), the Organisation for Economic Co-operation and Development (OECD), the World Food Program (WFP), the World Trade Organization (WTO), the United Nations Conference on Trade and Development (UNCTAD), the United Nations High-Level Task Force on the Global Food Security Crisis (UN-HLTF), and the World Bank.

YPARD is an international movement made by young professionals for young professionals. YPARD operates as a network; it is not a formalized institution. With more than 15,000 members from 168 countries, this multi-stakeholder platform's main mission is to serve as a collective global network that enables young professionals to realize their full potential and contribute proactively towards innovative and sustainable agricultural development.

Endorsed in December 2017, the United Nations Decade of Family Farming 2019-2028 seeks to place family farming at the center of national public policies and investments. In declaring this decade, the United Nations General Assembly recognized the importance of family farming in reducing poverty and improving global food security. The UN Decade of Family Farming is led by the Food and Agriculture Organization (FAO) and the International Fund for Agricultural Development (IFAD) in collaboration with governments and civil society organizations.