The Judge Advocate General's Legal Center and School, also known as The JAG School or TJAGLCS, is a graduate-level division federal service academy located on the grounds of the University of Virginia in Charlottesville, Virginia. [1] The center is accredited by the American Bar Association to award the Master of Laws (LL.M.) degree in Military Law. [2] The center educates military, civilian, and international personnel in legal and leadership skills. The LL.M. curriculum includes courses in Administrative and Civil Law, Contract and Fiscal Law, Criminal Law, and National Security Law. [2] The school serves primarily as the U.S. Army's law school for the Officer Basic Course (OBC) for initial-entry Judge Advocates, and as the graduate program for Judge Advocates of all services branches. It is the only ABA-accredited law school that only awards an LL.M. and not a Juris Doctor degree.

Despite a long record of service by Army Judge Advocates, it was not until the beginning of World War II that efforts were made to provide Army attorneys with specialized military legal education. [3] In February 1942, as uniformed lawyers' responsibilities increased in volume and complexity, specialized continuing legal education courses for Judge Advocates began in Washington, D.C. In August 1942, the school moved from Washington's National University School of Law to the University of Michigan Law School in Ann Arbor, Michigan. [3] Intended only as a temporary facility, it was deactivated in 1946 during the general demobilization following World War II. In October 1950, another temporary school was activated at Fort Myer, Virginia on land that is now a part of Arlington National Cemetery. After graduating six classes, it was decided a permanent school for Army lawyers should be established.

In August 1951, the Army accepted an offer from the University of Virginia to move the school there permanently. [3] The Seventh Judge Advocate Officer Basic Course and First Judge Advocate Officer Advanced Course began in the fall of 1951. [3] The University of Virginia was selected due to its proximity to Washington, D.C., and because it had the largest law library in the South at the time. [4] The Judge Advocate General's School was initially located in Clark Hall, then behind Clark Hall in what is now called Kerchof Hall. [5] In 1975, the JAG School relocated with the UVA's Law School to the university's North Grounds. Due to the close relationship between the Law School and JAG School, JAG students often share courses with UVA law students, and multiple UVA law professors serve as Army JAG officers. [6]

The building, and the adjacent law school building, were designed by Hugh Stubbins & Associates with Rawlings, Wilson, and Fraher. [7] An addition to the building, designed by Bohlin, Powell, Larkin, and Cywinski in collaboration with Johnson, Craven, and Gibson, was completed in 1991. [7]

Prior to entry into the JAG School, all Army judge advocates must have graduated from an ABA-accredited law school and be admitted to practice law by the highest court of a state or federal district. While some judge advocates have prior enlisted or commissioned experience, most are direct commissioned and have no prior military training or experience. The JAG School is generally considered the most exclusive graduate service academy within the U.S. Federal Government. Acceptance into the Army JAG Corps and subsequent JAG School is considered "highly selective" with an acceptance rate ranging between 4-7%. In 2017, the Army JAG Corps accepted 200 out of 4,000 applicants. [9] The JAG School has a long history of supplying attorneys into the military and federal government roles, particularly the federal judiciary.

The initial entry training into the JAG Corps is composed of two phases, first a 6-week Direct Commission Course (DCC) at Fort Benning, Georgia followed by military legal training at the JAG School.

The Judge Advocate Officer Graduate Course is the school's "flagship" course. [2] Accredited by the American Bar Association, the course prepares experienced military attorneys for supervisory duties and other positions of increased responsibility within their respective services. Students who successfully complete the course are awarded a Master of Laws degree in Military Law. [10] Selection to attend the course is a permanent change of station assignment; students do not attend in a temporary duty status. Each class consists of attorneys from the Army, Navy, Air Force, Marine Corps, and Coast Guard, as well as international military students and Army civilian attorneys. International military students have come from Egypt, Israel, Poland, Romania, South Korea, Bosnia and Herzegovina and other nations. All students are licensed attorneys who generally have five to eight years of experience.

The Graduate Course covers a full resident academic year from mid-August to mid-May. The fall and spring semesters include core classes required of all students. In the second quarter of the fall semester and in the spring semester, students select from approximately fifty electives offered by the school's four academic departments: Administrative and Civil Law, Contract and Fiscal Law, Criminal Law, and International and Operational Law. Students may specialize in one of the four academic areas in conjunction with the Master of Laws. To qualify for a specialty, a student must either write a thesis in the area of specialization, or earn at least ten elective credit hours and write an extensive paper in the area of specialization. [2]

The Judge Advocate General's Corps, also known as the "JAG Corps" or "JAG", is the legal arm of the United States Navy. Today, the corps consists of a worldwide organization of more than 730 commissioned officers serving as judge advocates, 30 limited duty officers (law), 500 enlisted members and nearly 275 civilian personnel, all serving under the direction of the Judge Advocate General of the Navy. 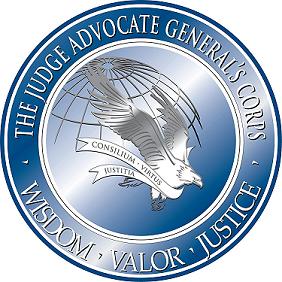 The Judge Advocate General's Corps also known as the "JAG Corps" or "JAG" is the legal arm of the United States Air Force.

The Judge Advocate General's Corps of the United States Army, also known as the U.S. Army JAG Corps, is the legal arm of the United States Army. It is composed of Army officers who are also lawyers and who provide legal services to the Army at all levels of command, and also includes legal administrator warrant officers, paralegal noncommissioned officers and junior enlisted personnel, and civilian employees. 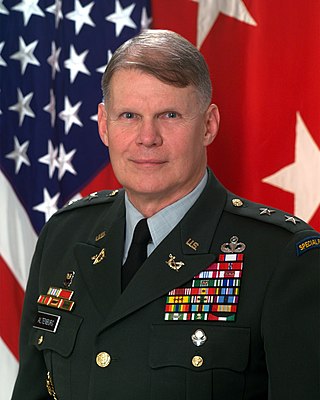 John D. Altenburg Jr. is a lawyer for the U.S. Army and a retired major general. In December 2003, Secretary of Defense Donald Rumsfeld named Altenburg as the appointing authority for military commissions covering detainees at Guantanamo. He resigned, effective November 10, 2006.

Colonel Frederic L. Borch is a career United States Army attorney with a master's degree in national security studies, who served as chief prosecutor of the Guantanamo military commissions. He resigned his commission in August 2005 after three prosecutors complained that he had rigged the system against providing due process to defendants. He was replaced by Robert L. Swann

Marc Warren is a senior counsel in Crowell & Moring's Aviation and Administrative Law & Regulatory practice group. From 2007 until joining Crowell & Moring in April 2014, Marc Warren was the Deputy Chief Counsel for Operations at the Federal Aviation Administration. He had been assigned to the US Army's Judge Advocate General office. He was at the Center for Military Law and Operations. He was a potential defendant in the proposed international war crimes prosecution for the Abu Ghraib and Guantanamo Bay torture scandal, undertaken by the German national Wolfgang Kaleck.

The Basic Officer Leader Course (BOLC) is a two-phased training course designed to commission officers and prepare them for service in the United States Army. Prospective officers complete Phase I as either a cadet or an officer candidate before continuing on to BOLC B as Second Lieutenants. If BOLC B is not completed within two years of commissioning, 2LTs will be administratively separated from the service unless there are extenuating circumstances. This a progressive model designed to produce US Army officers with leadership skills, small unit tactics and certain branch-specific capabilities.

Attorney Lawrence J. Morris is the chief of staff and counselor to the president at The Catholic University of America and a retired United States Army colonel.

Lisa M. Schenck is an American attorney, academic, and Judge of the United States Court of Military Commission Review. She has served as the associate dean for academic affairs at the George Washington University Law School since 2009. In March 2010, Schenck was appointed as a professorial lecturer in law, and teaches military justice. Prior to her career in academia, Schenck served in the United States Army Judge Advocate General's Corps for more than 25 years.

The Naval Justice School (NJS) is an educational institution of the United States Navy whose mission is to instruct Navy, Marine Corps, and Coast Guard officers and enlisted personnel in the fundamental principles of military justice, civil and administrative law, and procedure. In addition to being licensed attorneys in any state or territory of the U.S., all attorneys in the Judge Advocate General's Corps must undergo training either in this institution, or in the complementary institutions of the United States Army and the United States Air Force, allowing them to act as trial or defense counsel at military courts-martial. 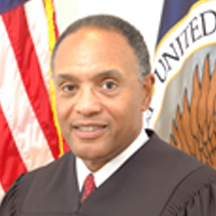 William Parnell Greene Jr. is a former judge of the United States Court of Appeals for Veterans Claims.

Flora Diana Darpino is a retired United States Army lieutenant general and military lawyer who was the 39th Judge Advocate General of the United States Army. She was the first woman to hold that position, which she held from September 4, 2013 to July 14, 2017.

Vice Adm. James Walter Crawford III is a university administrator and former United States Navy officer, serving for 34 years before retiring. He is currently the president of Felician University in New Jersey, having assumed the role in June 2021.

Patrick Finnegan was a United States Army Brigadier General, and the president of Longwood University. Finnegan served 39 years in the U.S. Army, retiring in 2010 after serving as the 12th Dean of the Academic Board at the U.S. Military Academy. Following his Army career, he was appointed as the 25th President of Longwood University in 2010. Finnegan stepped down as President in 2012 due to health reasons, and returned to private life.

The Judge Advocate General's (JAG) Department is the legal branch of the Indian Army. It deals with military related disciplinary cases and litigation and assists in providing legal assistance to the army in human rights matters and the rule of law among other things. The department consists of legally qualified Army officers who are educated in military law and provide legal help to the military in all aspects. The department supports the Judge Advocate General who is the legal and judicial chief of India and advises the Chief of the Army Staff of legal matters. The JAG's Department is also responsible for emerging fields of military law such as those related to cyber laws, space laws, terrorism and human rights violations. The service rendered in the JAG's Department are considered to be Judicial service as per the regulations for the Indian Army.